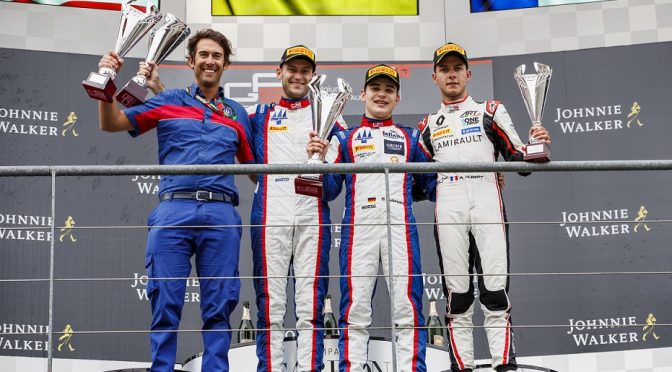 German driver clinches maiden win for Trident one-two finish
David Beckmann produced an assured drive in Race 1 at Spa-Francorchamps, Belgium, to clinch his first ever GP3 Series victory, seeing off the threat of Trident teammate Ryan Tveter to secure an one-two finish for the Italian team. ART Grand Prix’s Anthoine Hubert finished in third, having been unsuccessful in mounting a challenge on Tveter in the late stages of the race.
In the coldest conditions experienced in a race this season, the thermometer barely pushing 10°c at the start, the field lined up on the medium compound Pirellis despite damp patches on the circuit. As the lights went out, Beckmann grabbed a perfect start and immediately powered into a strong lead, taking advantage of the remainder of the field becoming congested at La Source. From eighth on the grid, Tveter slipped through into second as the ART trio of Hubert, Nikita Mazepin and Jake Hughes were bunched up on the outside of the corner – the American dived down the inside, with Pedro Piquet taking an early third.
With Beckmann disappearing up the road, Tveter and Piquet battled hard for third in the opening corners – Tveter going wide at Les Combes. Piquet was unable to capitalise, as Hubert repassed the Brazilian on the run down to Bruxelles, leaving him vulnerable to the advances of Hughes. By the end of the first lap, Beckmann held a 2.2 second lead, prompting Tveter to dial up the pace.
On the next tour of the seven kilometre circuit, Tveter had halved the deficit to Beckmann and was angling to be within DRS range of his German teammate. Hughes, meanwhile, had dispatched Piquet at the Kemmel Straight, and immediately set after Hubert with the intent of challenging for a podium.
Beckmann hit back, starting a rally between himself and Tveter as the pair traded fastest laps over the next series of laps. Regardless, Tveter was able to home in, and by lap 8 had managed to collect DRS to try and reel Beckmann towards him. The subsequent lap was Tveter’s best chance of making an overtake, getting close at the Kemmel Straight, but went deep into Les Combes and took to the run-off. This gave Beckmann some respite, and was able to open the lead up once again ahead of the race’s second half.