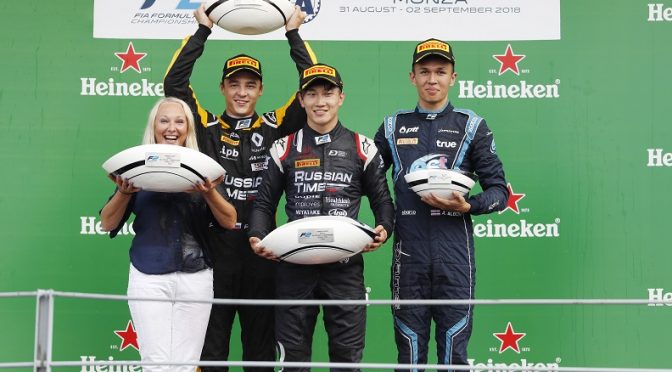 Japanese driver converts alternate strategy to maiden F2 win
Tadasuke Makino rocketed to a surprise victory in the FIA Formula 2 Championship Feature Race at Monza, Italy, expertly converting an alternate strategy call into a win from 14th on the grid. The Japanese driver pitted with three laps to go to emerge ahead of teammate Artem Markelov, holding station to give the RUSSIAN TIME team a one-two finish. Alexander Albon of DAMS completed the podium.
On an overcast day at the Autodromo Nazionale Monza, there was misfortune before the formation lap for Sergio Sette Camara; starting from second, the Carlin driver suffered from issues that relegated him to a pitlane start, leaving a berth free on the front row. As the lights went out, polesitter George Russell endured a slow getaway and was immediately accosted by Markelov and Albon – the Russian charging into the open space alongside Russell and emerging from the opening chicane with the lead, with Albon following through into second.
Markelov stamped his authority over the early stages of the race, but soon came under heavy pressure from Albon – the Thai driver began to initiate a challenge for the lead by lap 3, but couldn’t make an ambitious move on Markelov around the outside at the first Lesmo pay off. Albon staked Markelov out until the turn of the following lap, making his play for first into the first corner. Behind them, Makino was beginning to reap the rewards of starting on the medium tyre; getting up to eighth by the end of lap 1, the Japanese ace put the drivers ahead of him to the sword on the fourth tour of the circuit – overtaking Ghiotto, Norris, Latifi and Russell in one lap as the supersoft starters began to struggle.
RUSSIAN TIME then took control of the race, and Markelov usurped Albon in the lead with a charge into turn 1, as Makino squeezed past into Lesmo 1 later in the lap. The two then switched positions, Markelov letting Makino run clear amid different strategies. At the end of lap 6, the front-runners all ditched their supersoft tyres having come to the end of their life, Russell leapfrogging Albon in the pits as Nicholas Latifi joined them on fresh medium tyres a lap later.
Running his own race, Makino had a clear advantage after the pitstops and was well ahead of fellow alternate strategy-dabblers Ralph Boschung and Dorian Boccolacci, also boasting a 40s gap to Markelov – who came under fire from Russell post-pitstop. Sensing that Russell would have the legs on him with DRS at the start of lap 10, Markelov let the championship leader through at the Parabolica before reassuming a tow into turn 1 to clear the ART driver for good. Albon breezed past Russell at the same corner on the following lap, leaving him in the clutches of title rival Lando Norris. 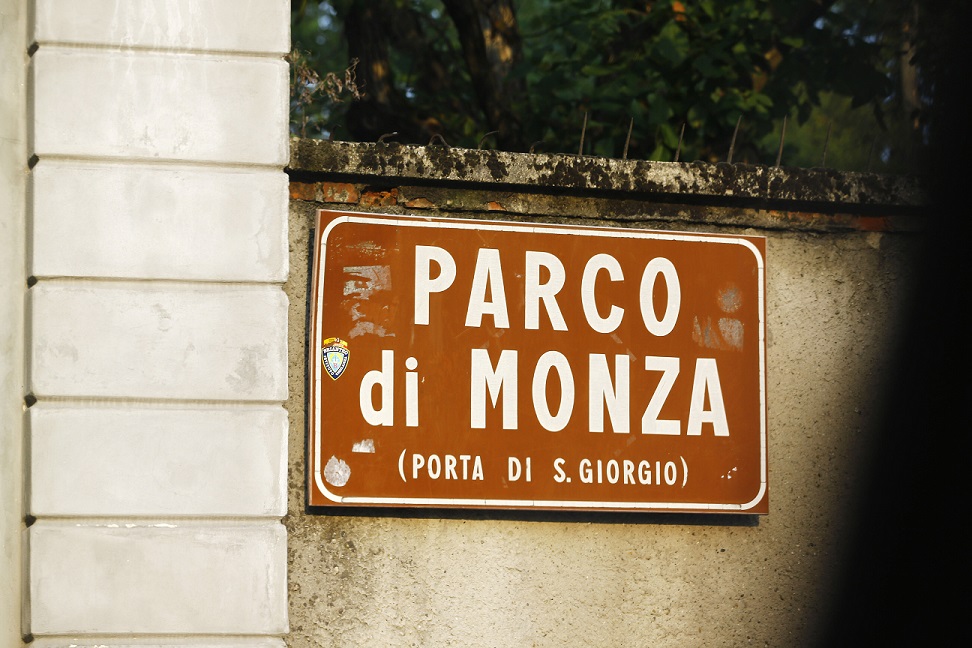 Kimi  will start the Italian Grand Prix on pole position  after finishing fastest in qualifying. Sebastian Vettel will line up in second whilst Lewis Hamilton qualified in third.

Ferrari’s front-row triumph is their first in Italy since 2000, while it also marked Raikkonen’s first since last year’s Monaco Grand Prix.

Hamilton set the fastest lap on the opening runs in the shoot-out for pole before Raikkonen returned to take the spoils. 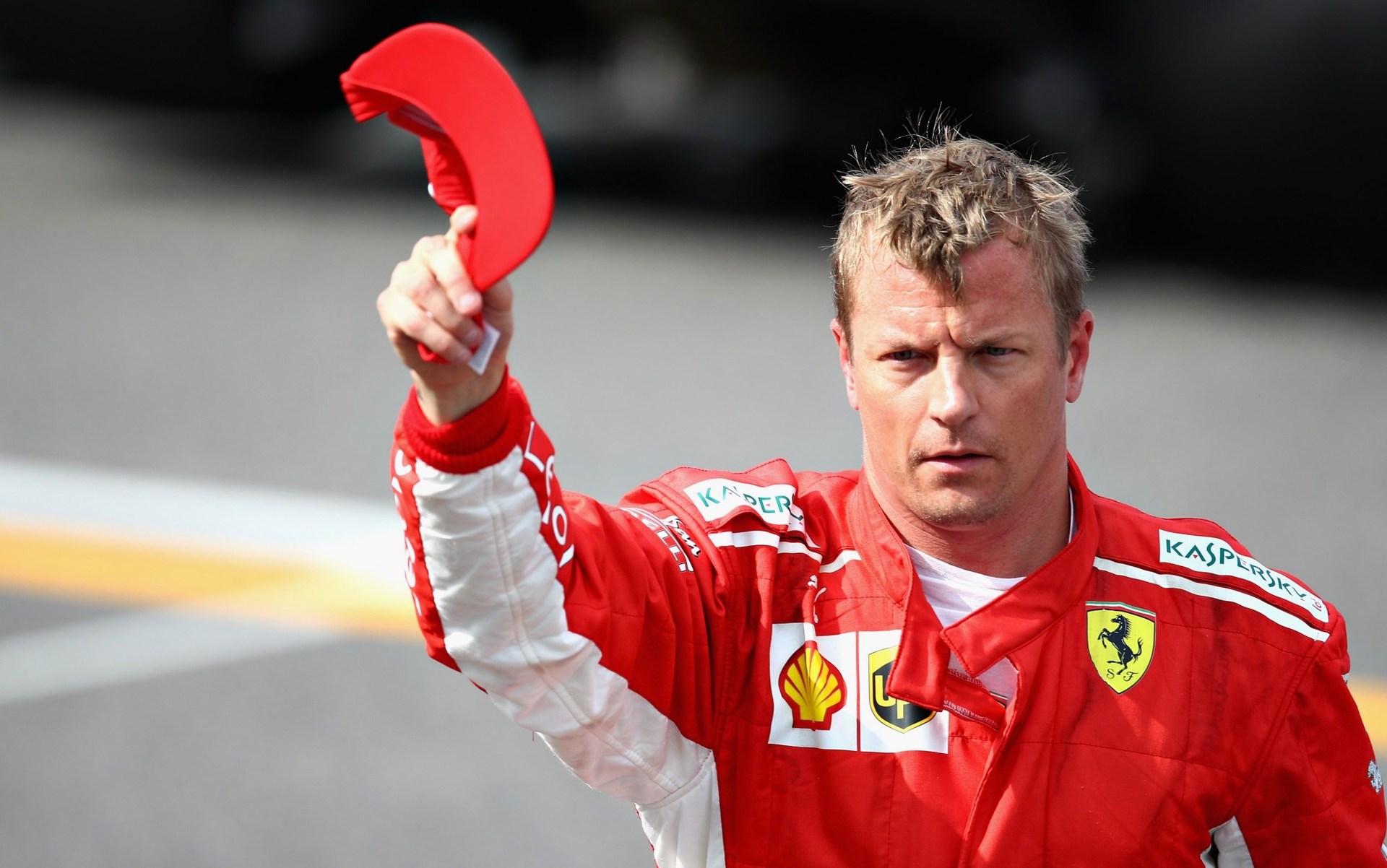 Raikkonen’s lap, which was in excess of an average speed of 163mph, eclipsed the sport’s quickest lap, set here by Juan Pablo Montoya for Williams, in 2004.

At 38 years and 320 days, Raikkonen is the oldest pole sitter at an F1 race since 41-year-old Nigel Mansell started from the front at the 1994 Australian Grand Prix.

“It is the best place to be, and it went right in the end,” said Raikkonen, whose lap was officially recorded at 163.785 mph.

“Being one and two is great for Ferrari, but it is only half the job done.”

Vettel added: “It wasn’t my best lap, but well done to Kimi. I am not entirely happy with the end of my qualifying and that is the emotion that is dominating now. It says passion on the Ferrari banner and that is exactly what the fans have.”

Hamilton, who was booed by the tifosi, said: “The second lap was still good, but it could have been better, but it was just amazing how intense it was, and that is how racing should be.”