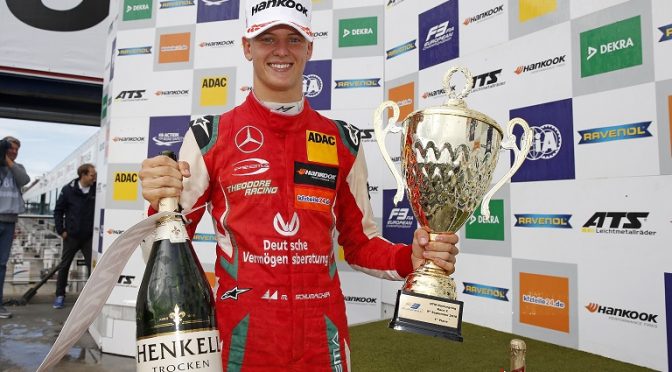 In the 23rd race of the FIA Formula 3 European Championship season, Mick Schumacher (PREMA Theodore Racing) claimed his fifth win of the year. At the 3.629 kilometres long Nürburgring sprint circuit, the 19-year-old came out on top from the best-placed rookie Robert Shvartzman (PREMA Theodore Racing) and Daniel Ticktum (Motopark). The British Red Bull junior remains in the lead of the drivers’ standings, but second-placed Schumacher managed to reduce the gap to only 16 points.

At the start, Mick Schumacher took the lead. Daniel Ticktum and Robert Shvartzman battled for second place that eventually went to the Russian. A collision between Jüri Vups (Motopark) and Enaam Ahmed (Hitech Bullfrog GP) in the first corner after the start saw the Hitech driver ending his race in the gravel bed. The safety car was deployed as a result.

Racing resumed at the start of lap three and Schumacher immediately pulled clear from Shvartzman. On lap 16, Marino Sato (Motopark) collided with Ben Hingeley (Hitech Bullfrog GP) after which both youngsters retired. A brief safety car intervention followed and Schumacher successfully defended his lead at the restart. He then went on to drive an undisputed victory home while Shvartzman had to defend his second place from a charging Ticktum in the final stages of the race. There were no more position changes in the top three, so that Schumacher won from Shvartzman and Ticktum.

Mick Schumacher (PREMA Theodore Racing): “I am very happy with my victory and with my great car. My team has done a great job. In the race, we had two safety car interventions and I had two good restarts. Every time, I managed to pull away from Robert, which was important. Now, I will try to win the third race of the weekend this afternoon as well.