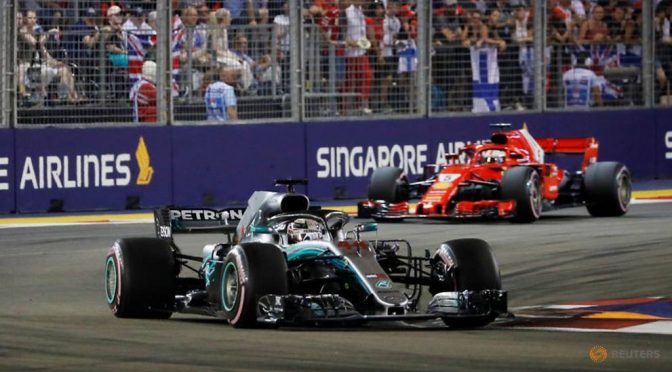 FERRARI CONTINUE TO BLOW IT!

LCH extended his lead in the championship to 40 points over Sebastian Vettel after converting pole position into victory at the Singapore Grand Prix.

The result represents a hammer blow for Vettel’s title hopes as the Ferrari driver could only manage third place behind Red Bull’s Max Verstappen in second. Vettel had gone into the Singapore weekend desperate for victory after winning just one of the last four races compared to Hamilton’s three, but a poor qualifying performance on Saturday and a botched strategy on Sunday saw him lose another 10 points to his title rival.

Vettel had moved ahead of Verstappen for second place at the start of the race, but Ferrari dealt him a lousy hand by switching him to the ultra-soft compound tyre instead of the more resilient soft at his on and only pit stop on lap 13. Hamilton pitted a lap later and Mercedes opted to counter Ferrari’s strategy by switching the race leader to softs — the safer and more stable tyre to use for such a long stint to the chequered flag. INCREDIBLE!