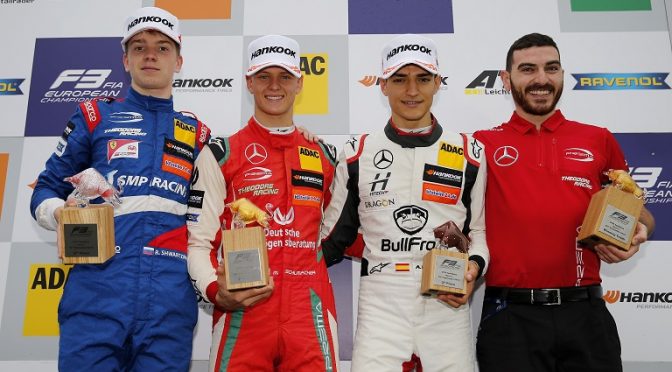 Mick Schumacher started the race from pole position, but had to defend his position from a charging Robert Shvartzman. After some laps, Schumacher had established a small margin that he was able to maintain until the end. For Shvartzman, the best-placed rookie in the field, his second place was never under threat either.

Behind the two Prema drivers, Marcus Armstrong (PREMA Theodore Racing) initially was running in third place, but he lost this position to Ferdinand Habsburg (Carlin). The only Austrian in the FIA Formula 3 European Championship field already moved up from eleventh on the grid to fifth at the start and even claimed third place soon after that. However, he wasn’t able to keep it for a long time as Armstrong moved ahead of him. On lap nine, Alex Palou, who had started from 13th place, overtook the New Zealander and eventually was third across the finish line.

Mick Schumacher (PREMA Theodore Racing): “At the start and on the first few laps, I had to defend my position from Robert. At that time, the track was still quite slippery and I didn’t want to take too many risks. After that, I was able to pull clear a bit and tried to save my tyres as much as I could. I am very happy that things were going so well for me at the wet and drying track. And I am also happy to have taken the lead in the drivers’ standings.”