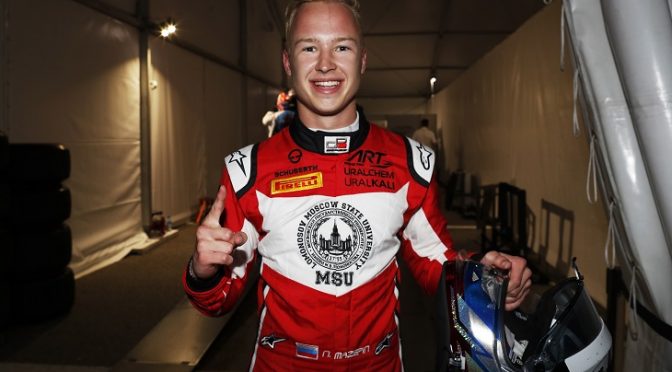 Russian driver claims first GP3 pole by 0.017s
Nikita Mazepin took his first GP3 Series pole position in Qualifying at Sochi, Russia, setting the fastest time late on in the session in front of his home supporters. The ART Grand Prix driver held off from Campos Racing’s Leonardo Pulcini to secure the quickest time, as Callum Ilott completed the top three.
Jake Hughes was first out onto the circuit, followed by the remainder of the ART quartet Mazepin, Anthoine Hubert and Ilott. The early advantage was Mazepin’s, and the Russian ended the first set of runs on top having bested Hughes’ briefly quickest time, before Campos Racing’s Simo Laaksonen upset the ART order by flying into second place.
Once again crossing the line first on the next flying runs, Hughes was one more shut down by Mazepin who was able to withstand a quick lap from Ryan Tveter – who went just 0.031s slower than the home favourite. The ARTs were able to collect a third set of runs, but this time Hubert picked up the gauntlet and brought the pace into the 1m52s.
Following the midsession tyre swap, Hughes was out on the road first once more, but was unable to use his track position to claim top spot – Mazepin returned to provisional pole by going just half a tenth quicker than Hubert. Meanwhile, Trident’s David Beckmann was ruled out of claiming his third consecutive pole after suffering a mechanical issue late on – leaving the German to pull over at the side of the road.
Mazepin’s pole was hardly assured, as Ilott and Pulcini were both bothering the best sector times throughout their final runs. They fell just short; Mazepin went quicker, just ensuring that pole position was just out of Pulcini’s reach – the Italian crossed the line just 0.017s down, beating Ilott to the front row at the death of the session.
Giuliano Alesi claimed fourth, beating Hubert in the final set of laps while Tveter beat Laaksonen by just under two tenths of a second. Richard Verschoor was eighth ahead of Joey Mawson, as Hughes completed the top ten having been unable to improve in the final moments.
F1Weekly Podcast # 825