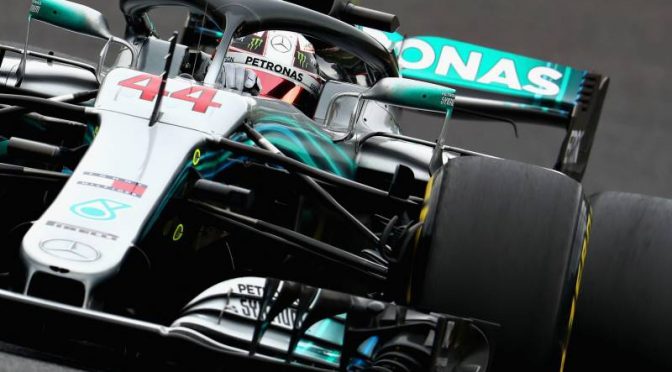 THE FAT LADY IS TUNING UP!

LCH  took pole position for the Japanese Grand Prix with title rival Sebastian Vettel ninth after yet another Ferrari F***-up.

Hamilton set his pole lap in the first part of the final qualifying session while Ferrari missed an opportunity to run in the dry as a result of team and driver errors.

They erroneously sent the drivers out on treaded tyres in the dry at the start, and Vettel failed to get in a time after switching to dry-weather ‘slick’ tyres.

By the time of the second runs, it was already raining hard so no-one improved.

Vettel needed desperately to have a good weekend here in Japan after falling 50 points behind Hamilton in the title race after the Mercedes driver’s win in Russia last weekend. But instead it could not have been a lot worse.

With five races remaining, there is only a maximum of 125 points up for grabs.

The second session had been curtailed by a rain shower but the track was dry at the start of the final session and Ferrari chose to send both Vettel and team-mate Kimi Raikkonen out on intermediate tyres.

Vettel realised it was an error before he had even left the pits, but it meant he had to do a lap to bring the car back and fit slicks.

By the time they went out, Hamilton and Bottas had already set their times, and by the time the Ferrari drivers started their qualifying runs, the rain had just begun to fall.

Both ran wide at the Spoon curve, but Raikkonen only just, and he did a time fast enough for fourth behind Red Bull’s Max Verstappen. Vettel went off much further and his time was good enough only for ninth, 4.432secs off pole.

Everyone went out again for a second attempt, but by now the rain was too hard and Ferrari’s woe was complete.