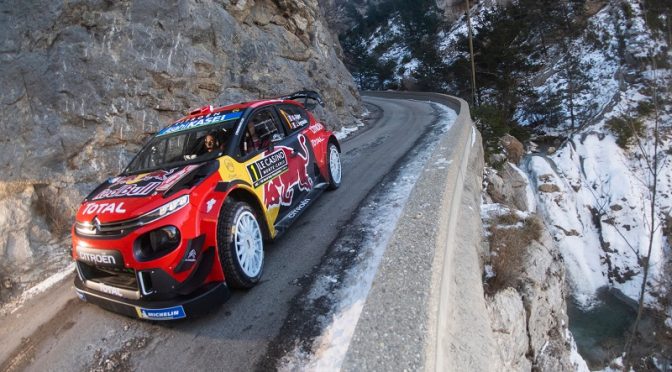 Sébastien Ogier and Julien Ingrassia claimed two stage wins during today’s leg on their way to grabbing the overall lead, proving they have already got to grips with their C3 WRC. Forced to retire after breaking a suspension wishbone on the apex of a corner, Esapekka Lappi and Janne Ferm paid a heavy price for a relatively minor mistake.

After fresh snow fell on Thursday morning, Valdrome – Sigottier (20.04km) and Curbans – Piegut (18.47km), the two new stages that stood out in today’s leg, promised to be especially tricky in the many sections left in the shade, deprived of any warming effect of the sun. The Citroën Total World Rally Team therefore decided to opt for four Michelin studded tyres and two soft compound slicks for their cars, in what should have proven to be the right call on tyre choice. However, the cancellation of SS3 (Valdrome – Sigottier) – the iciest of the morning loop’s three stages – seriously compromised the tactics of the team.

Given the situation, Sébastien Ogier and Julien Ingrassia managed to produce a sublime performance on SS4! Fitted with two studded tyres and two slicks mounted on opposite corners of the car, on a test more suited to a dry tyre set-up, they nonetheless managed to grab the third fastest time, reducing the gap to the leaders in the process. The pair then secured their first stage win in the C3 WRC on SS5, reaching the midday service just 3.4s off the leader. In the afternoon, the six-time world rally champions confirmed how much they relish this unusual event. They collected a second stage win on SS6 to take them into the overall lead, ended day two with a 2.0s lead over their nearest rivals. All of which suggests that they have already formed an effective bond with C3 WRC!

Following the cancellation of the day’s opening stage, which left him to cope with a tyre set-up that had suddenly become unsuited to the conditions, Esapekka Lappi had a slightly harder time of it. However, he remained in the fight for a top-five spot at the end of the first loop. Unfortunately, an impact broke part of the front left-hand suspension on his C3 WRC when action resumed in the afternoon (SS6), forcing him to retire from the leg. He will rejoin tomorrow, determined to keep building on his promising start with the C3 WRC.

The rally heads towards the Champsaur and Dévoluy mountains tomorrow, on what is home territory for Sébastien Ogier. The local favourite will therefore be determined to keep up his good form on the 93.38 kilometres contested on Saturday’s leg (in four stages).