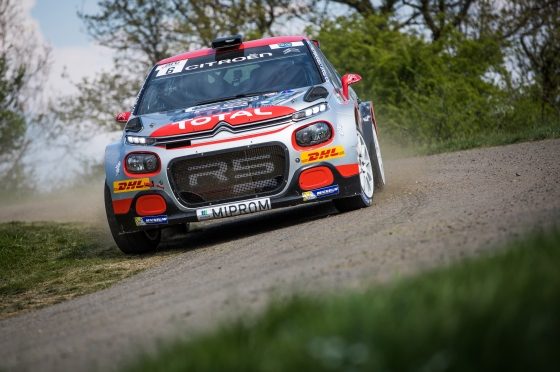 Bonato-Boulloud and Rossel-Fulcrand dominated the event in the C3 R5, the French crews winning thirteen of the fifteen stages and leaving their rivals to fight over the crumbs at this year’s Rallye Lyon-Charbonnières-Rhône. Yoann Bonato and Benjamin Boulloud lived up to their status as reigning two-time French Rally champions (2017 and 2018), the pre-event favourites immediately grabbing the overall lead by winning the opening stage. It was a lead that they would hold onto until the end of the rally, whilst also picking up the honour of “best performers” with eight other stage wins. It was a dominant, controlled performance from start to finish.

This was their first win of the year, a second consecutive victory at this event after prevailing here in 2018, and the result moved them to the top of the French championship standings. Still learning about the C3 R5, Yohan Rossel and Benoît Fulcrand, winners of the 2018 Peugeot 208 Rally Cup, picked up where they had left off at the Rallye Terre des Causses (2nd), gradually upping their pace as they finished the event on a high. Having taken one stage win during the first leg on the wide, circuit-style roads, they ended day one fourth overall, just 1.5s adrift of second place. However, another three stage wins on Saturday’s afternoon loop enabled them to grab second place by eight tenths of a second. A narrowly secured runners-up spot that shows not only how closely contested the event was, but also how the pair improved over the two days.