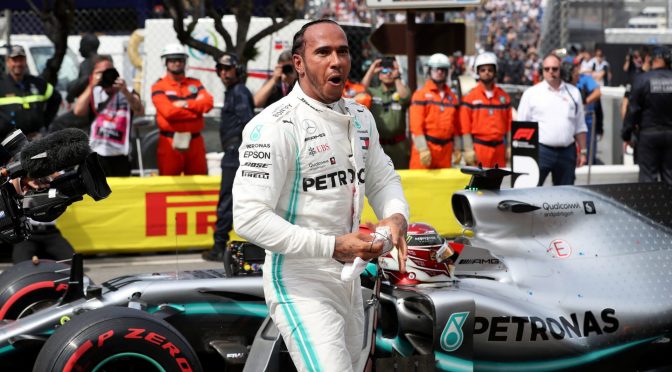 LCH beats Bottas to pole position for the Monaco Grand Prix with a brilliant last lap.

“That is what I am talking about!” yelled an emotional Hamilton before leaping out of his Mercedes car and on to the catch fencing in front of the fans at Rascasse.

“This is a race that every driver dreams about,” said Hamilton.

“We have arrived with a great car and it was a great battle with Valtteri. The pole means so much to me. I had to dig deeper than ever.

“The lap was beautiful. I feel amazing and super-grateful. When you take this car to the limit around here it is like wrestling a bull. We are on the limit the whole time.”

Charles Leclerc was a shock Q1 casualty in Monaco GP qualifying as the Ferrari driver endured a nightmare Saturday ahead of his home race.

Leclerc was left in the pits by Ferrari as other drivers improved in the first part of qualifying, and the disastrous result means he is set to start Sunday’s race from 16th.

“It’s a very difficult one to take,” Leclerc told Sky F1. “I need some explanations.”

The Monegasque, who set the pace in the final practice session in Monte Carlo, was eventually eliminated by team-mate Sebastian Vettel, who was also struggling in Q1 before posting a quick lap in the closing stages.

“I asked whether they were sure [to keep me in the pits], they told me we think we are,” Leclerc, who also nearly missed the weighbridge, added. “I asked again… but there were no real answers.

“We had plenty of time to go out again. The weighbridge was not a problem. We still had the fuel to go again, just had to change tyres. None of this was a problem. I need some explanations.”