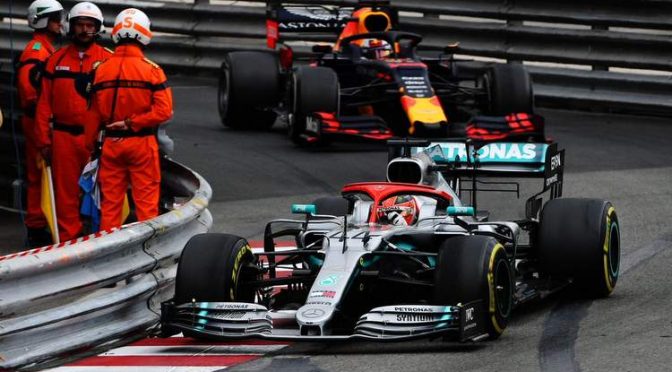 LCH COULD NOT BE PASSED AND WINS IN MONACO

LCH won the 77th running of the Monaco Grand Prix, Round 6 of the 2019 Formula 1 World Championship, on the streets of Monte-Carlo.

The reigning Formula 1 World Champion was made to work hard all afternoon as he was chased hard by Max Verstappen in the Red Bull. But the Dutchman was never in it to win it after he was handed a five-second penalty for an unsafe release during his pitstop.

Verstappen’s mishap promoted Sebastian Vettel to second and Mercedes driver Valtteri Bottas to third, the latter hampered by the unsafe release of the #33 Red Bull.

Wearing a bright red helmet in honour of the late F1 great Niki Lauda, Hamilton had to fend off Verstappen with softer tyres in very sore state by the time the flag waved to end the face.

He was made to work with everything he had by Verstappen who was on the harder white band tyres which lasted longer on the day.

Hamilton did a top-notch job nursing the car to the end, never putting a wheel wrong despite the incessant pressure from behind but, as Monaco tends to be, this was a stalemate despite a late race lunge by Verstappen which forced the pair to cut the harbour chicane with no consequence.

Bottas looked set for second place but a Mercedes sixth one-two did not happen as Verstappen’s unsafe release foreced the team to pit the Finn for a puncture suffered in the altercation while leaving the pits.