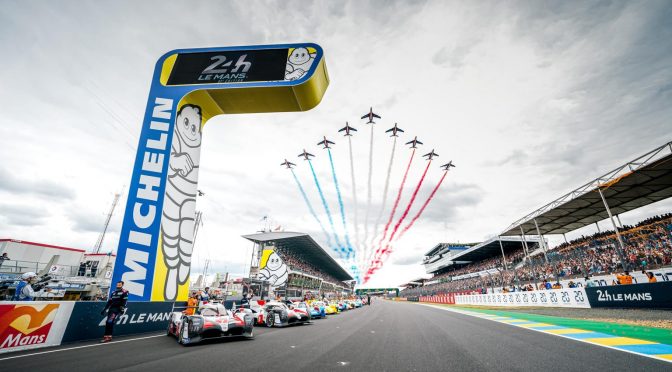 The #7 TS050 Hybrid looked to have an edge over the sister car – and Mike Conway, Kamui Kobayashi and Jose Maria Lopez looked well set for a straightforward victory over the #8 car until drama struck the trio with just over an hour of the race remaining.

Lopez had more than two minutes in hand when he pitted to replace a suspected front-right puncture, but it was in fact the right-rear that needed changing, forcing the Argentinian to limp back to the pits. He resumed 50s down on Nakajima in the #8 car once the issue was solved.

After assuming the lead when Nakajima made his final routine stop, Lopez pitted for the final time with 20 minutes to go and took the flag only 16s in arrears.

Alonso will leave Toyota now a three-time world champion, adding to his two Formula One titles, while Sebastien Buemi and Nakajima join the Spaniard in becoming two-time Le Mans winners. Was it deserved?

No 7 had been the standout car all week, setting the fastest time in first qualifying despite a head-on collision for Mike Conway and topping the tables come Thursday night to start from pole. Despite swapping the lead through the night with the No 8 as the safety car process once again causes controversy in hindering some and helping others, there could be no doubting that in the hands of Lopez, Kamui Kobayashi and particularly Mike Conway, they were the fastest car for 24 hours. And even when victory started to slip away from them, it was still the No 7 setting the pace, with only the unthinkable luck of two punctures in two laps costing them victory.

Somehow Toyota had managed to make themselves the story, despite being anonymous for the first 23 hours, which sadly took the attention away from a number of brilliant battles throughout the field.

The No 11 SMP Racing showed the power of patience as the Russian outfit watched its two main rivals in the two Rebellions sabotage their own races, with the No 1 taken out by reliability issues and No 3 crippled by two offs from Thomas Laurent and Gustavo Menezes, the two young talented chargers who still have a bit to learn around the Circuit de la Sarthe.

With their teammate, the No 17 SMP Racing BR1, crashing out during the night in spectacular circumstances as Egor Orudzhev lost control in the Karting Esses, the team of Vitaly Petrov, Mikhail Aleshin and Stoffel Vandoorne took the non-hybrid LPM1 victory and the third step on the podium.