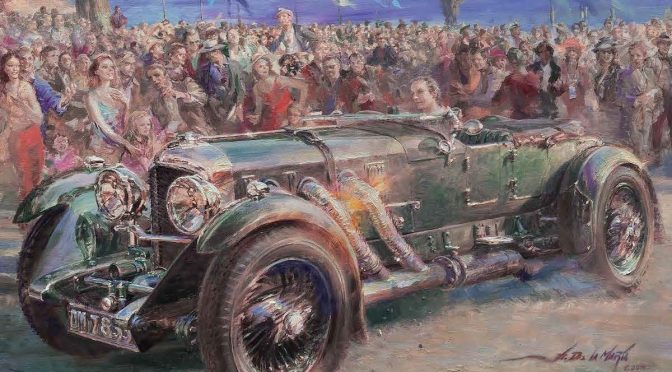 CLARK IS ELATED THAT FERNANDO ALONSO TOOK THE CHECKERED FLAG AT LE MANS LAST WEEK AND REFUSES TO LISTEN TO THE  NEGATIVE PRESS ON THE RESULTS MEANWHILE NASIR IS SHOCKED AT THE HOST’S LE NASCAR NEWS!

AS THE HOST MENTIONS IN THE PROGRAM ON THE UPCOMING PEBBLE BEACH CONCOURS D’ELEGANCE BENTLEY WILL BE THE FEATURED MARK.

Bentley Will Rule the Competition Field This Year

In its centennial year, Bentley takes center stage at the 2019 Pebble Beach Concours d’Elegance, as one glance at the concours poster makes clear. Painted by renowned modern impressionist Alfredo De la Maria of Argentina, the poster features a magnificent 1931 Bentley 8 Litre making its way past the crowd on Concours Sunday.

Bentleys will constitute about a quarter of this year’s concours competitors, filling six complete classes that include several special groupings. Offerings will range from the earliest surviving 3 Litre to a multitude of racing greats and several superlative postwar cars.

The car featured on the concours poster is probably the most coveted 8 Litre in the world. Ordered by pioneering Welsh aviator and Brooklands racer Captain Vivian Hewitt, it was the ultimate sporting machine, pairing a short chassis with a lightweight body, massive power (witness the enormous side exhaust) and large Le Mans–style fuel tank and gauges. Hewitt drove this Bentley just under 7,000 miles in the 1930s, then parked it in a barn where it slumbered for 26 years. Now owned by Daniel Sielecki, it remains an unrestored original.

“In past years some spectacular Bentleys have gathered here—particularly our 2009 showcase of Bentley team and race cars that included Old Numbers 1, 2 and 3, as well as Birken Blowers 1 through 4—but I can confidently say the Bentleys headed our way on this occasion promise to surpass past displays,” said Concours Chairman Sandra Button.

Walter Owen Bentley, who preferred the simple moniker “W.O.,” founded his namesake company on July 10, 1919. The brilliant engineer, who pioneered the use of alloy metals in automotive and aircraft engines, served at its helm just a dozen years before the financial stress of the Great Depression forced the company’s sale to rival Rolls-Royce. But in that short time, Bentley forged a legacy that survives to this day—as does the Bentley marque, which is now in the hands of the Volkswagen Group.

When the first 24 Hours of Le Mans was being organized in 1923, W.O. thought the idea was “crazy,” noting “cars aren’t designed to stand that sort of strain!” But he soon set about building cars that could meet that challenge—and Bentleys won five of the first eight Le Mans races. They were also victorious in numerous other races and endurance challenges.

“W.O. made an indelible mark on history,” said Peter Hageman, a Concours Selection Committee member who has been involved in gathering the Bentleys for the coming event. “He created heroic cars that were driven to glory by heroic men and women. Their stories fueled the imaginations and desires of a host of early automotive enthusiasts, and they continue to inspire us today.”

The Bentleys that drive onto the 18th fairway of Pebble Beach Golf Links on August 18 will meet a place marking a centennial of its own. As W.O. was creating his company in England, Pebble Beach Resorts was being carved into the West Coast of the United States under the guidance of Samuel F. B. Morse. For a century now, it has served as home to major competitions and great champions.

A Bentley last claimed the Best of Show trophy at the Pebble Beach Concours in 1965. Will the marque win again at this centennial celebration?