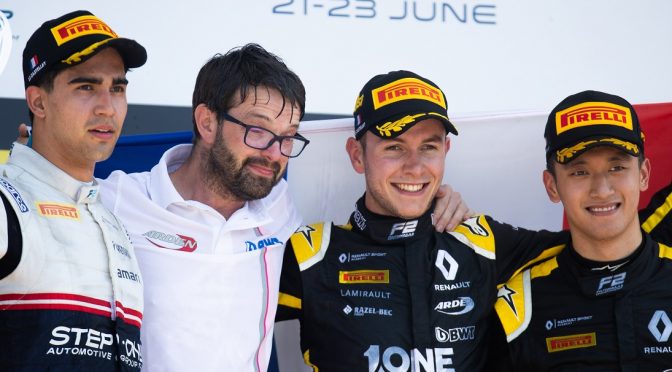 Frenchman dominates in Round 5 Sprint Race
Anthoine Hubert became the first ever Frenchman to win at home in the FIA Formula 2 Championship with a Sprint Race victory at Le Castellet. It is the BWT Arden ace’s second win in three races, topping a podium of three rookies, with Juan Manuel Correa in second and Guanyu Zhou in third.
The Renault junior’s sternest test would come when the lights went out, as Jack Aitken made a searing start off the line and sprinted down the right of four cars, claiming second at the first corner when Jordan King went wide. In front of a sea of French flags, the BWT Arden of Hubert was the only machine to resist Aitken’s charge.
Championship contender Nicholas Latifi enjoyed a similarly strong start, leaping ahead of Correa for third and a potential podium place. His title rival Nyck De Vries had no such luck, dropping two places to ninth and out of the points.
Having claimed the scalps of all but one in front of him, Aitken was determined to complete the set and had Hubert within DRS range once it was enabled. Behind him, Correa reclaimed third from Latifi, before the DAMS driver locked up and lost a further place to the fast improving Zhou. Aitken took a brief look to the right of the Frenchman in front of him, but opted to bide his time – a choice he later came to regret.
Having been so intent on catching the frontrunner, the British driver failed to see the Sauber Junior Team by Charouz car gathering pace behind him. Quickest on track, Correa nabbed P2 from the Campos Racing driver at the north chicane, narrowly avoiding a kiss of tyres.
Aitken was further condemned as he watched Zhou thunder past him shortly after, with his team telling him to ‘pick up the pace’ on the radio. Defending fourth from the clutches of Latifi and Sérgio Sette Câmara would fast become his priority.
Out in front, Hubert was proving imperious, building up a 2s gap over Correa despite the American setting another fastest lap. Further meat was added to the three-way tussle for fourth as Sette Câmara pounced on Latifi at the Signes corner. The Canadian attempted to fight back as they exited the turn and briefly reclaimed the position, but his teammate eventually made the move stick.
De Vries’ morning had looked to be improving after moves on Nobuharu Matsushita and Jordan King put him back in the points, but his relief wouldn’t last long. Louis Delétraz, Callum Ilott and Matsushita had all lined up behind him and he was back out of the points by the final lap, having seen all three dovetail past him.
Hubert crossed the finish line to a rapturous home crowd, who roared in support of their countryman’s race win. Correa settled for second, while Zhou completed a trio of rookies on the podium for the first time this campaign. Aitken held on to fourth ahead of Sette Câmara, Latifi, Delétraz and Ilott.
De Vries retains his Championship lead with 121 points, but is now just 12 ahead of second placed Latifi. Aitken is third on 85 points, with Sette Câmara on 80 and Zhou on 76. In the Teams’ standings, DAMS are first on 179 points, with UNI-Virtuosi Racing on 143. ART Grand Prix are third with 127, ahead of fourth placed Campos Racing on 115, with Carlin fifth on 66.