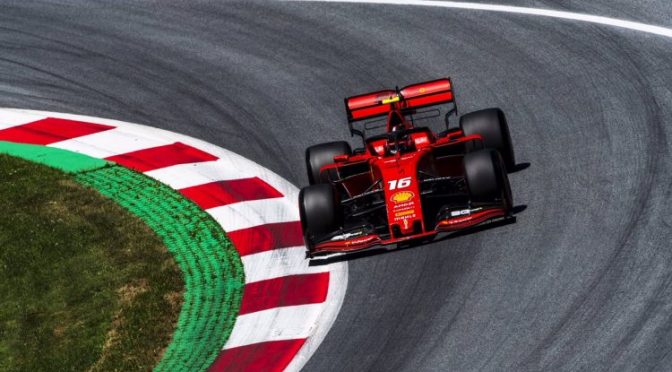 JUST IN… FORMULA 1 CHAMPIONSHIP LEADER LEWIS HAMILTON HAS BEEN DEMOTED FROM THE FRONT ROW FOR THE AUSTRIAN GRAND PRIX AFTER INCURRING A PENALTY FOR IMPEDING KIMI RAIKKONEN IN QUALIFYING.

Driving the only Ferrari on track in Q3, Leclerc finished top of the timesheets with a track record 1:03.003 at the Red Bull Ring, as Sebastian Vettel was denied the opportunity to set a time due to an issue with the air pressure line on his SF90’s engine.

Lewis Hamilton could only manage P2, 0.259 seconds back with the prospect of a penalty for blocking Kimi Raikkonen in Q2 still looming.

Max Verstappen was P3 with a 1:03.439, delivering a strong result for Red Bull at their home race.

Leclerc’s chances of taking pole position were given a boost when his team mate hit trouble. Vettel hadn’t done an extra run at the end of Q3 and the reason became clear as Ferrari mechanics crowded around his SF90. A problem with the air pressure line to the engine had been discovered, and as the minutes ticked down Ferrari gradually realised Vettel would be unable to take part in Q3.

That left Leclerc on his own, not that it put him off his stride. He lowered his best time with both efforts, and established a new track record of 1’03.003 has he claimed the second pole position of his career.

Hamilton was on the back foot after his first run. He led the Mercedes cars and the rest of the field out of the pits to begin with, and without the benefit of a tow he could only managed the fourth-fastest time behind his team mate and Verstappen.

When it came to the final runs Hamilton hesitated briefly as he left his pit box and his team immediately pounced on him for the delay. “Lewis we can’t wait on time, get going, get going,” came a voice from the pit wall. He got on with it when he joined the track and was quickly told his out-lap time was “safe”.

This time he had cars ahead of him, however, and that gave him the vital extra boost he needed to claim second place on the grid. Verstappen pulled off another great lap to split the Mercedes, putting his Red Bull third on the grid.