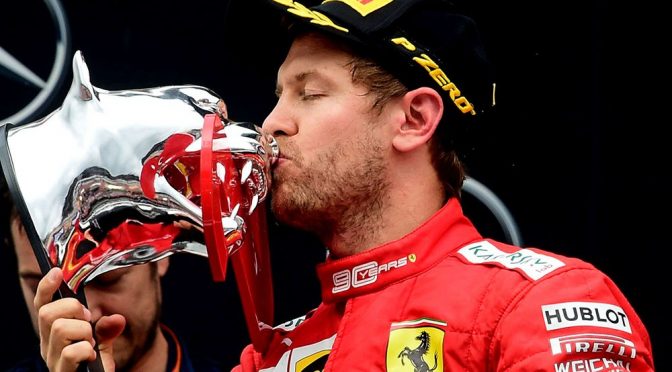 THE GERMAN GRAND PRIX HAS BROUGHT NEW HOPE TO THE HOST AND NASIR THINKS THIS MAY HAVE BEEN THE BEST F1 RACE IN DECADES! LET’S HEAR FROM MR. VETTEL…

“That was quite a race. I enjoyed it even though it was a tricky race, something of a lottery. It was a very long one and I don’t even remember all of it. It was very tough at times, especially on the intermediates in the slippery conditions.

I made up a lot of ground immediately after the start and in the first couple of laps, even though it was difficult to see. After that, it was quite hard to get into a rhythm as I did not feel so comfortable on the intermediates and their degradation was quite high. It was hard to tell if the lack of grip was because of the track being greasy or because the tyres were going off.

To be honest in these kind of races you can’t count on anything until the last couple of laps. I think I was about P8 when the last safety car came out. There are so many decisions to make, but overall we stayed on track and in the race. In mixed conditions when it was starting to dry on the slicks I felt comfortable and that’s when we made up the most ground.” 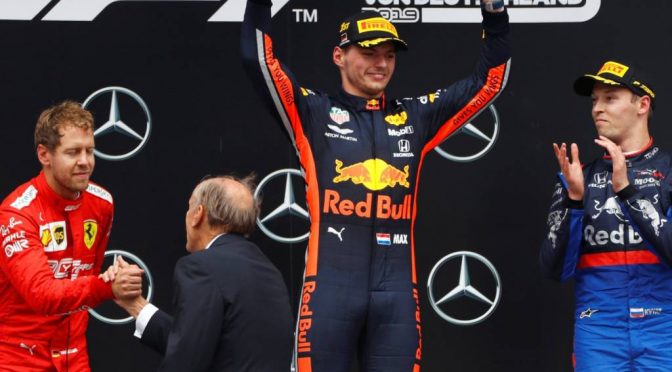 MAX WINS, VETTEL TURNS THE CURSE AROUND AND MERCEDES IMPLODE

No Formula One fan would have likely predicted that Sunday’s Grand Prix would see Sebastian Vettel finish second after starting last, Daniil Kvyat giving Toro Rosso their second only podium in F1 competition and both Mercedes cars finishing outside of the points, yet all three happened, making for an unpredictable race that fans will remember for years to come.

“It was amazing to win in the end,” Verstappen said following his victory. “It was really tricky to make the right calls. To come out on top it was all about not making mistakes. It’s amazing to win here” 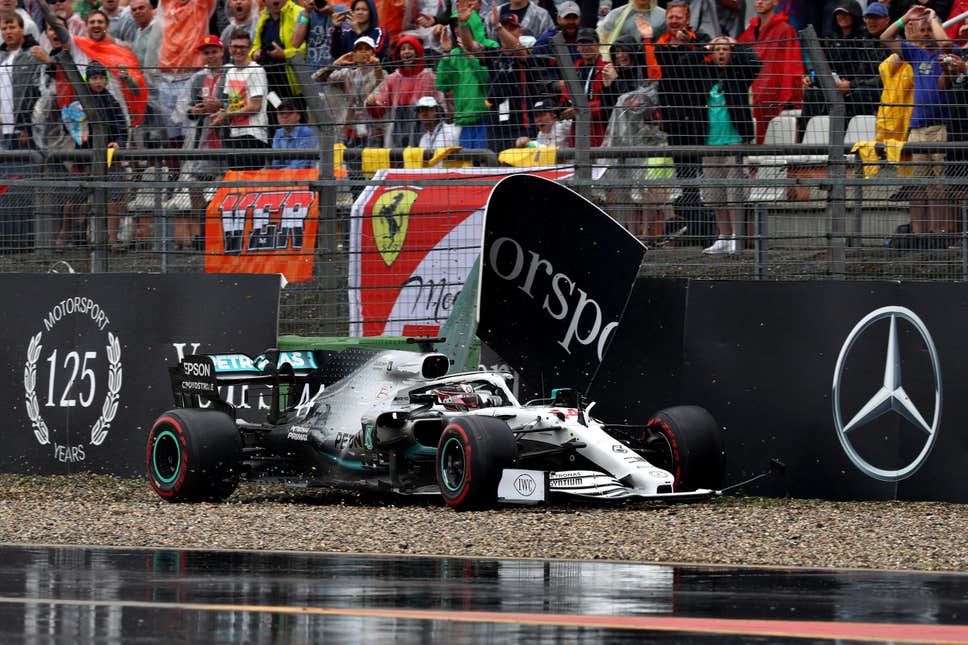 Vettel, who spent the race slowly moving his way through the field to his second-place finish after starting from the 20th position, gave his hometown fans plenty to cheer for.

Daniil Kvyat finished the race in the third position, giving Toro Rosso their first podium since Sebastian Vettel gave the team their lone victory in the 2008 Italian Grand Prix. 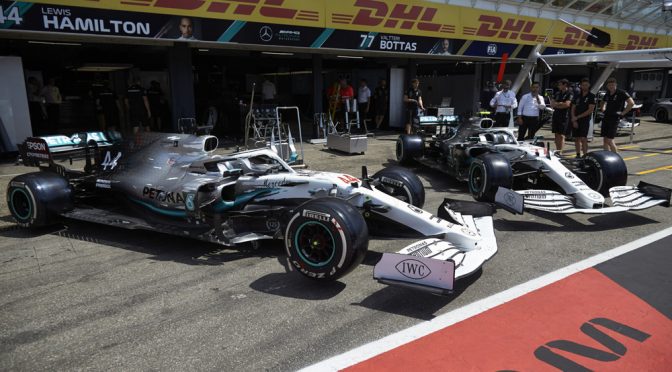 LCH DOES IT AGAIN! WITH THE HELP OF THE CURSED SCUDERIA.

LCH will start Sunday’s German Grand Prix from pole position after topping a dramatic qualifying session that saw both Ferrari cars hit trouble, leaving Charles Leclerc and Sebastian Vettel way down the order.
On a weekend that Mercedes is celebrating 125 years in motorsport, Hamilton continued the team’s impressive Saturday record this year by taking his fifth pole of year, edging out Red Bull’s Max Verstappen in the final stage of qualifying.

Hamilton won a Q3 fight that featured neither Ferrari driver after both Leclerc and Vettel were sidelined by separated issues.
For the second time in three races, Vettel was unable to post a time in Q1 after reporting a loss of power during his very first lap of the session. Ferrari instructed Vettel to return to the pits slowly so it could investigate the issue, but did not have time to resolve the problem and get him back out on-track.

With three minutes left on the clock, Vettel jumped out of his car without a time on the clock in qualifying, resigning him to last place on the grid on Sunday. Ferrari later confirmed the problem had been caused by an airflow issue to the turbo on his power unit. 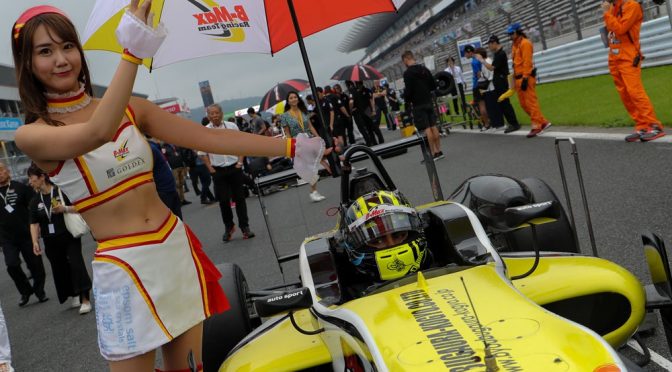 We are very pleased to report young British talent and friend of F1weekly, Enaam Ahmed, has found success in the Land of the Rising Sun. In slippery conditions Enaam took his first victory in the 2019 Japanese Formula 3 Championship at Fuji, July 13th.

Enaam started Saturday’s Round 11 from fifth on the grid in his B-Max Racing with motopark F3 Dallara. He also recorded the fastest lap on slick tires on a wet track.

In Sunday’s second race of the weekend Enaam was again on the podium, this time in second which helped him to fourth place in the championship at this stage, just one point behind local driver Toshiki Oyu.

The season started in April at the world famous Suzuka circuit, despite limited pre-season testing Enaam made a stellar start to his Japanese campaign by finishing on the podium in third place in the opening round, and runner-up in race 2.

Double podium finishes followed in the next round in May at the Autopolis circuit. His next podium appearance was in June at Sugo in third place.

Enaam, 2017 British Formula 3 Champion, last year raced in the European Formula 3 series; winning two races on his way to a top 10 finish in the ultra-competitive championship. While the dream and the goal remain Formula 1, focus for the 2018 season shifted to Japanese Formula 3. 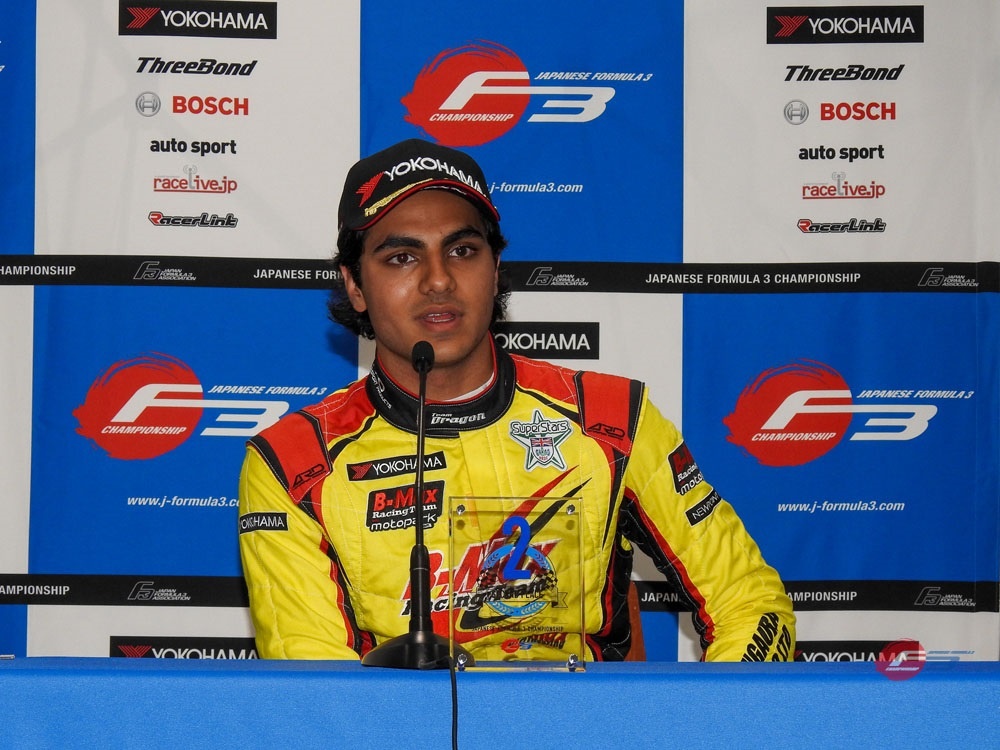 Ralf Schumacher, who also raced in Japanese Formula 3 before joining his brother in Formula 1, said in an F1Weekly interview some years ago that winning in Japan is very difficult as the local Japanese drivers are very determined not to lose on their home ground.

Enaam is going through this experience now. Feeling jolly goode on his Japanese success, he posted on his Twitter account:

“Delighted with my first win in Japan on Saturday and then to back it up with a second place in race two on Sunday. A massive thank you to all my team and bring on Sugo in 2 weeks #maidenwin #fuji.”

Live streaming is available on all Japanese Formula 3 races on their You Tube channel.

Enaam is fourth in the championship with 46 points. French driver Sacha Fenestraz is the current championship leader. 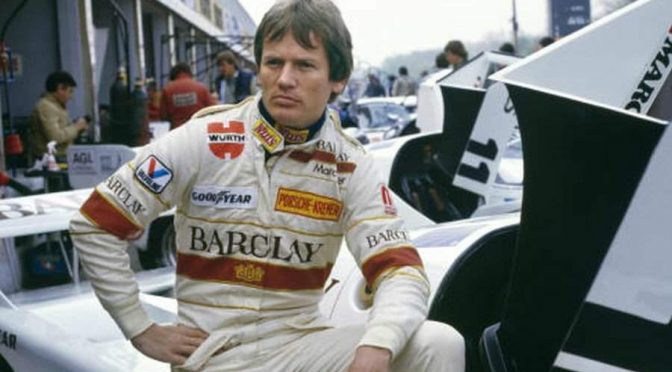 HERE WE GO! THIS TIME THE HOST IS HAPPIER AND IS ACCEPTING LCH WILL WIN THE REST AND NASIR BRINGS US AN INTERVIEW WITH A FORMER F1 DRIVER FROM SWITZERLAND

MARC SURER made his Formula 1 debut for Ensign at the end of the 1979 season, then broke his ankles when he crashed an ATS at Kyalami the following spring while testing for the South African Grand Prix. He started 1981 by driving for Ensign and coming fourth in the Brazilian Grand Prix, but then suffered more leg injuries when he crashed – again at Kyalami. It was a tough blow but Surer fought back again and drove for Arrows from 1982 until the end of 1984.

He was hired to drive for the Brabham-BMW squad in 1985. That year he also won the Spa 24 Hours, sharing a Schnitzer BMW 635CSi with Gerhard Berger and Roberto Ravaglia. In 1986 he was transferred back to Arrows but his professional racing career ended soon afterwards when he crashed his own Ford RS200 on the Hessen Rally in Germany. The accident cost the life of his co-driver and Surer suffered terrible injuries and burns.In 1988 however BMW took him on to be an instructor in its driver training programme and he started his career as a TV commentator with the DRS channel in Switzerland. In 1991 he was appointed head of BMW Motorsport and in 1994 and 1995 Johnny Cecotto and Jo Winkelhock won the German Super Touring Car Championship for BMW. In 1996 he began commentating for the German TV station DF1 and in 1997 became the host of his own programme on Swiss TV. He remains a TV presenter and racing school instructor. 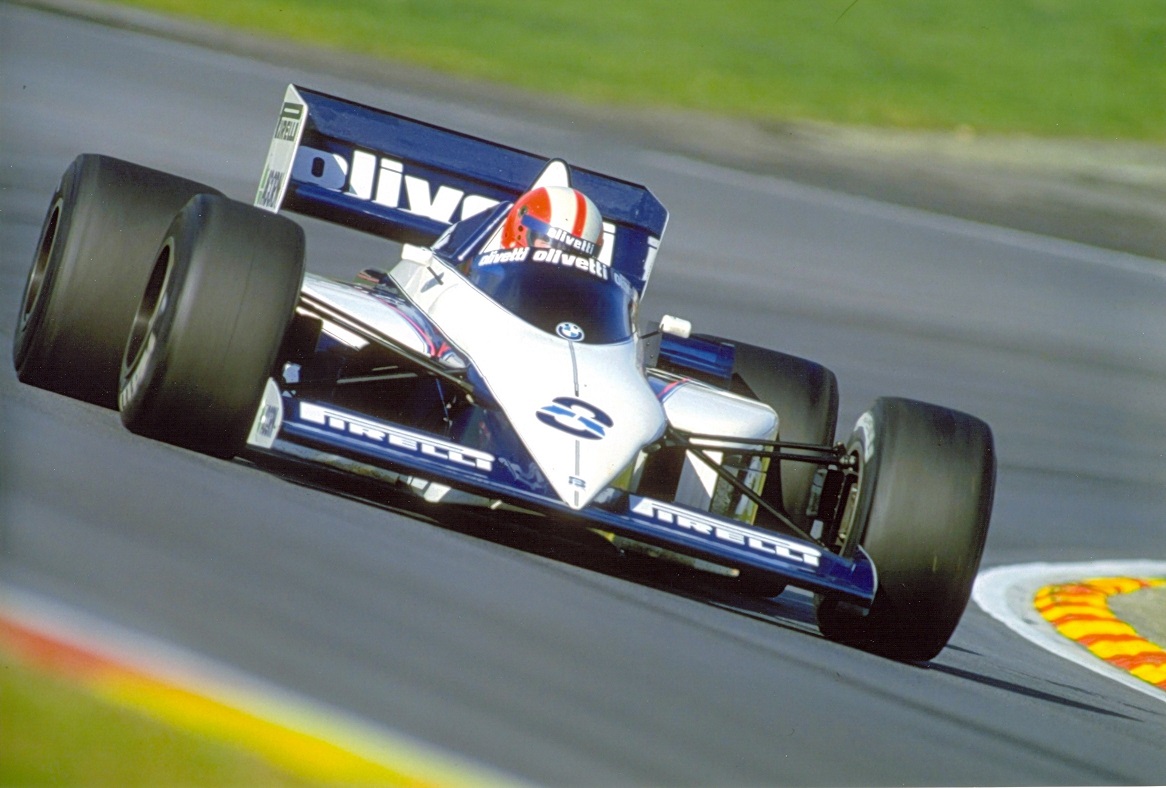 The most disappointing races:
Crash with Warwick on 3rd Position in Monaco 1983
Retiring on 2nd spot in Brands Hatch 1985
Retiring on the way to 3rd place in Adelaide 1985

The early years: From Karting to Formula 2 Champion 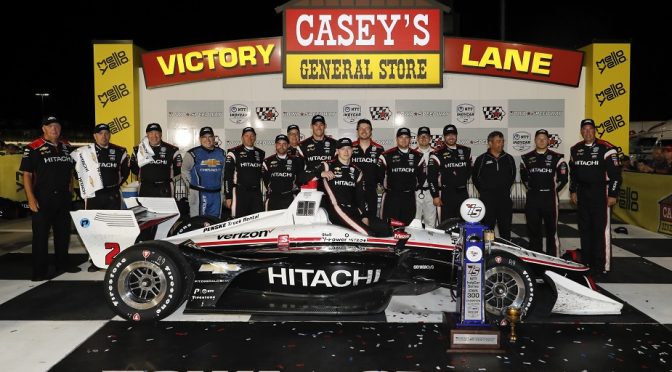 NEWTON, Iowa (Sunday, July 21, 2019) – The hour of day at Iowa Speedway was different, but the domination by Josef Newgarden was not. And this time, he won the Iowa 300.

For the fourth time in five years, Newgarden led the most laps in the race at the NTT IndyCar Series’ smallest track. Last year, he led 229 of the 300 laps but settled for a fourth-place finish. This time he went to victory lane by leading 245 laps in Team Penske’s No. 2 Hitachi Chevrolet.

Newgarden capped this victory, his fourth of the season and the 14th of his career, at 2:14 a.m. ET due to a pair of rain delays.

The start of the race was delayed four and a half hours due to severe weather, including lightning and heavy rain. The green flag finally waved at 11:45 p.m. ET. 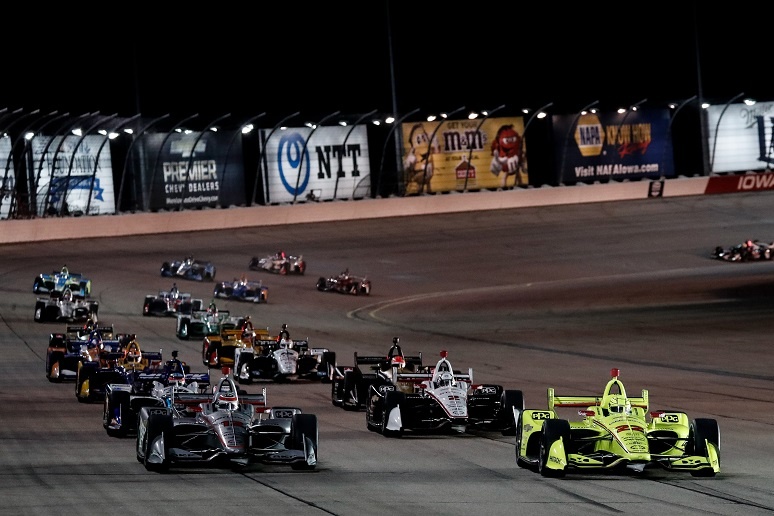 A brief shower at 12:12 a.m. ET led to a red flag at Lap 55. Newgarden was leading then, having passed teammate Will Power amid traffic in Turn 1.

Newgarden admitted being sour after qualifying third Friday behind his teammates, polesitter Simon Pagenaud and Power. But he regrouped and refocused, channeling that energy to getting the car ready to race.

“I’m much happier tonight, I can tell you that,” Newgarden said. “I was really a little bit frustrated yesterday just because I knew we had a pole-winning car. We didn’t put it together. It’s competitive.”

The victory allowed Newgarden to extend his series points lead to 29 over Andretti Autosport’s Alexander Rossi, who finished sixth. Newgarden lapped Rossi on Lap 185, although Rossi battled back to make it interesting for a few laps.

Chip Ganassi Racing’s Scott Dixon finished second for the fifth time this season in the No. 9 PNC Bank Honda after falling a lap off the pace early in the race. The recovery came as a result of smart pit strategy initiated by the crew – they gave him new tires on Lap 268 — and it keyed Dixon’s 45th career second-place finish. The five-time NTT IndyCar Series champion has now finished first or second in 90 of his 316 career starts (28.4 percent).

It was quite the comeback.

“Huge credit to the team,” Dixon said. “They (left) me out pretty long before the last caution. It enabled us to stay on the lead lap, get that lucky yellow, get new tires. (We) had a good restart, were able to (pass) some cars. … We were actually probably going to be happy with a top 14 or 15 (finish), so that was pretty stellar.”

Arrow Schmidt Peterson Motorsports’ James Hinchcliffe, who won last year’s race, finished third in the No. 5 Arrow Honda. The top-three finish was his first since this race a year ago.

“For all the fans that stayed out, weathered the storm – literally – huge thanks,” Hinchcliffe said. “I think it was well worth the wait. Hopefully everybody that did come and stayed for the race enjoyed the show. It felt pretty exciting from where we were sitting.”