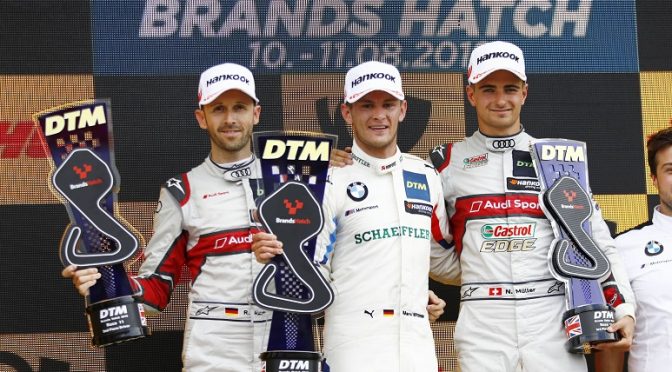 Wittmann wins from Rast and Mueller as top three in title standings stand atop Saturday podium
Drama-galore: Wittmann thrills with four-car scrap into Paddock, and Rast’s last-lap bid for victory falls short by just 0.3s
All three DTM manufacturers – Aston Martin, Audi and BMW – all in the hunt for victory
By the tiniest of margins, BMW’s Marco Wittmann (GER) took victory in the DTM’s opening race of the Brands Hatch weekend, ahead of Audi drivers René Rast (GER) and Nico Mueller (SUI).

The race teetered in several directions as each of the DTM’s three manufacturers battled for supremacy around the classic Kent circuit. Ultimately, Wittmann triumphed – by 0.3s – after Rast relentlessly chased him down on the final time, reducing the gap to the leader by five seconds.

Wittmann’s victory and pole position enabled him to narrow Rast’s championship points’ lead: Rast remains in the lead, with 178 points from Müller (151 points); Wittmann sits third, on 146 points after achieving the maximum of allocation 28 (25 for the win; 3 for pole) for the third time this year.

Audi’s Müller maintained his points-scoring consistency – collecting points in the 11th successive race. No other driver has managed to score in every race of 2019.

Paul Di Resta, who won the Sunday race at Brands Hatch back in 2018, became an unlikely contender for victory on Saturday. From fourth on the grid, he made a perfect start to lead into Paddock Hill Bend. In fact, his start was deemed too perfect – race control awarded him a five-second pit-stop penalty after judging that he has jumped the start.

Before serving the penalty, however, the Scot led commandingly, pulling clear of the chasing Wittmann, and offering fans a tantalising glimpse at what might be possible once the R-Motorsport Aston Martin effort is fully refined. His afternoon ultimately went unrewarded when he was forced to retire with an engine issue late into the race.