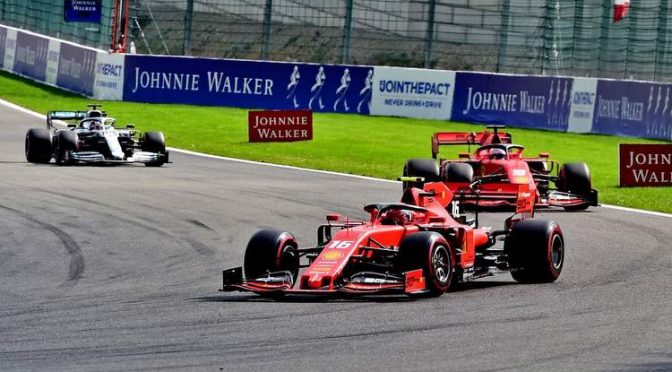 Leclerc won his first Formula 1 race on Sunday when he triumphed at a sombre Belgian Grand Prix.

The Ferrari driver made no mistake whatsoever as he powered to a light-to-flag victory on a dark weekend for motorsport at Spa-Francorchamps, a day after his friend since the karting days – Anthoine Hubert – perished in a horrific Formula 2 race accident a day earlier.

It was popular and well-deserved victory for the 21-year-old who has come close on a few occasions this season, but on the day at the sport’s most daunting venue, he opened his account and joined the greats of our sport as a Grand Prix winner.

It was a day of many firsts for Leclerc: the first of many wins one would be safe to predict, the first one of the year, the first since Kimi Raikkonen won for the Reds in the USA last year and the first driver to score a maiden F1 win at Spa since Micahel Schumacher

Behind winner Leclerc, Lewis Hamilton chased hard all day and came desperately close as a last-lap showdown loomed but the Ferrari driver had it covered, but it was breathtaking stuff until they crossed the finish line sending the fans into euphoria.

A dream came true for the kid from Monaco who immediately dedicate his victory to Anthoine Hubert.

He said afterwards, “It was a difficult race and we were struggling with the tyres towards the end. I’m a lot happier than what I managed in Budapest from my side. I managed the tyres better, so it’s a good weekend performance-wise with pole position and my first victory, so for that I’m quite satisfied.”

“On the one hand, I have a dream since I was a child that has been realised, and on the other hand, it has been a very difficult weekend since yesterday. We have lost a friend first of all, and it’s very difficult in these situations so I would like to dedicate this win to him.

“We have grown up together and my first ever race I did when I was seven with Anthoine, so it’s such a shame what happened yesterday.  I can’t fully enjoy my first victory but it is a memory that will live with me forever,” added Leclerc.