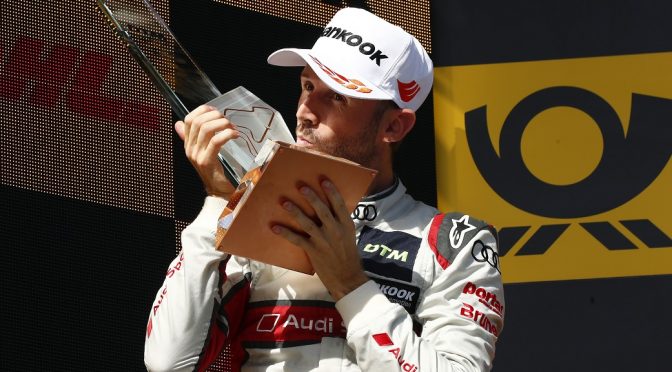 The power of two: Rast powers to second DTM title

Audi driver René Rast (GER) was crowned 2019 DTM champion after finishing third in Sunday’s Nürburgring race, throwing the title beyond the reach of his closest rival.

After taking pole and victory in Saturday’s race, Rast looked increasingly assured of sealing the title at the penultimate round of the series after securing a front-row starting place. Chief rival Nico Müller (SUI) would start from 14th.

Only Klaus Ludwig and Bernd Schneider (both GER) have won more than two titles. Rast celebrated his second crown in only his third full season in the DTM – earlier than any other driver before him.

Sunday’s race at the Nürburgring turned into another Audi demonstration run, including matching an earlier record achievement.

Jamie Green (GBR) started from pole position and dominated the race, beating fellow Audi driver Robin Frijns (NED). For Green, it was his first win since the 2017 season finale. The Briton becomes the seventh driver to win a DTM race in 2019, and led home an Audi septet that was completed by Loïc Duval (FRA), Jonathan Aberdein (RSA), Nico Müller (SUI) and Mike Rockenfeller (GER).

The finishing order meant that Audi today equalled a record established by BMW at Zandvoort in 2015:  a clean-sweep of the top seven finishing positions.

Disillusion for BMW and Aston Martin

BMW could only secure three points-scoring positions after a disappointing day for the Munich marque. Philipp Eng (AUT) flew the flag for BMW with his eighth-place finish while Timo Glock (GER) finished ninth and Bruno Spengler (CDN) came home 10th. Once again, Daniel Juncadella (ESP) was the best-placed Aston Martin driver, 12th across the line.

In spite of the early deciders in the battles for the drivers’ and manufacturers’ titles going the ways of René Rast and Audi, there is still everything to play for in the teams’ classification during the season finale at the Hockenheimring (4-6 October). Audi Sport Team Rosberg (Rast/Green) has a margin of just 32 points over Audi Sport Team Abt Sportsline (Müller/Frijns)