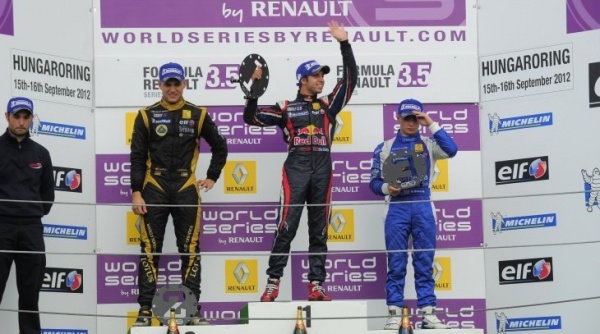 Having driven a superb race, Kevin Magnussen (Carlin) seemed on course to claim his second win of the season in the Formula Renault 3.5 Series. However, on the final lap, the Dane was forced to stop his car following a gearbox oil leak. This allowed Antonio Felix da Costa (Arden Caterham) to grab victory for the first time in the competition. Marco Sorensen (Lotus) finished second and Will Stevens (Carlin) came third to complete an all-rookie podium. Robin Frijns (Fortec Motorsports), meanwhile, strengthened his championship lead and finishes the weekend with a 24-point advantage at the top.

Robin Frijns qualified seven thousandths of a second quicker than Kevin Magnussen to take his fourth pole of the season, after a session in which 16 drivers were separated by less than a second. Arthur Pic (Dams) and Antonio Felix da Costa lined up on the second row, while Jules Bianchi (Tech 1 Racing) and Sam Bird (ISR) – Frijns’s main title rivals – started in seventh and ninth respectively.

As the lights went out, Robin Frijns stayed glued to the starting grid, allowing Kevin Magnussen to take the lead ahead of Antonio Felix da Costa, Will Stevens and Sam Bird. Marco Sorensen got away in fifth place ahead of Arthur Pic, while Robin Frijns slipped down into seventh, just in front of Jules Bianchi. The order changed again on lap three when Jules Bianchi was overtaken by Kevin Korjus. Robin Frijns gained a place the following lap by overtaking Arthur Pic, a move that saw the championship leader climb into sixth place.

With the mantatory pitstop looming, Robin Frijns closed in on Marco Sorensen. Sam Bird was the first of the frontrunners to enter the pits for a change of tyres. Robin Frijns made his stop a lap later, at the same time as Arthur Pic, but the Dutchman rejoined the race behind the Frenchman.

But while the order at the front seemed settled, there was a thrilling battle for fifth place in the closing stages of the race. As the laps went by, Robin Frijns grew increasingly impatient behind Arthur Pic and Sam Bird. Frijns eventually pounced on a mistake by Pic and moved up into sixth place.

At the end of the race, the tension in the Carlin camp was palpable as white smoke began to appear from Kevin Magnussen’s car. In the final lap, the Dane was forced to stop his car after falling foul of gearbox oil leak. Antonio Felix da Costa took advantage to snatch a last-gasp victory ahead of Marco Sorensen and Will Stevens. Sam Bird finished fourth, just ahead of Robin Frijns. The result sees Frijns retain his place at the top of the championship with a 24-point lead over Jules Bianchi, who crossed the line in ninth.

Antonio Felix da Costa: “I was handed the win after Kevin Magnussen retired. I feel sorry for him, but that’s racing, and it happened to me last week in the GP3 Series. This is a first victory for me and for Arden Caterham, so it’s obviously a great day for us. This isn’t my favourite circuit, but I won both races here in GP3 and now I’ve got my first victory in the Formula Renault 3.5 Series.”

Marco Sorensen: “I’ve had my share of bad luck, particularly at Silverstone, where a puncture cost me the victory. So I’m happy to be back on the podium. We weren’t quite up to scratch in qualifying this weekend. We’ll have to work on that aspect to have a hope of winning one of the remaining races.”

Will Stevens: “Of course, I feel sorry for Kevin. As for me, I learn something every time I get into the car, as I’ve joined directly from the Eurocup Formula Renault 2.0. I’m picking up the pace with each race, and this podium is a reward for all the hard work that Carlin and I have been putting in.”