Rubens Barrichello, the most experienced Grand Prix driver of all time, has never raced in the Indy 500 before, but did win at Indy the 2002 US Grand Prix for Ferrari.

His helmet, however, once raced in the Indy 500 when old pal Tony Kanaan and “Rubinho” wore each other’s helmet livery during the Memorial Day weekend of racing.

While Rubinho’s helmet made the rounds at IMS, TK’s helmet was moving around Rascasse and Rivage and going through the tunnel in the 2006 Monaco Grand Prix.

Their friendship goes back to the days when they were kids and racing in karts. TK’s dad at one time worked on Rubinho’s karts. 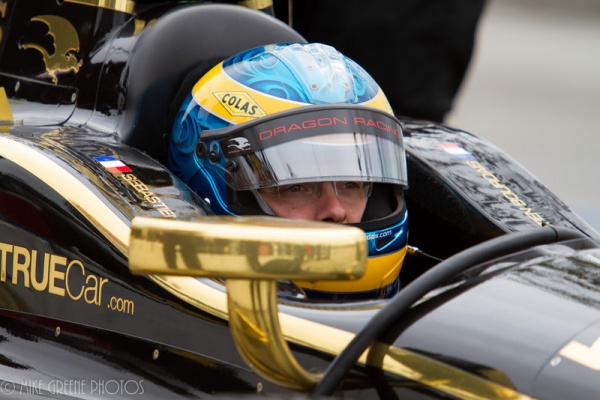 Dragon slayer. There was a time when Sebastien Bourdais could do no wrong in Champ Car racing, apart from fighting with Paul Tracy. The Le Mans native achieved incredible success with Newman-Haas team before Nicolas Todt negotiated a deal and placed him at Toro Rosso.

Bourdais fell out of orbit with Red Bull’s satellite team and is now back in Indy Cars. Thanks to Peugeot he was also able to take part in his home town’s famous 24 hour race. 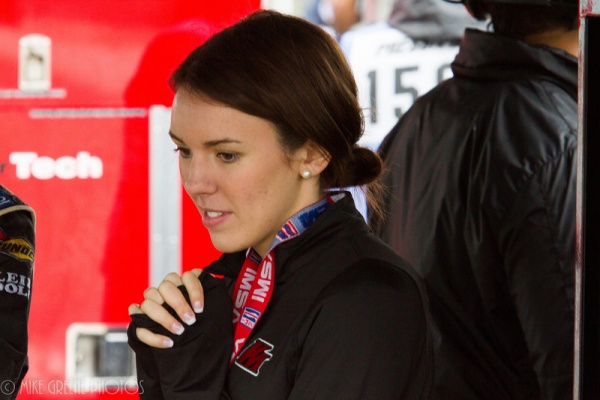 F1 Weekly would like to thank our listener and ‘snapper’ Mike Greene for the lovely photographs. 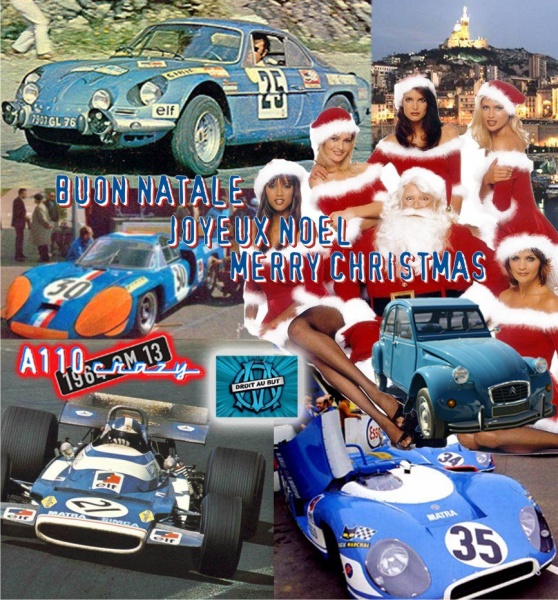 Happy Birthday Bernie! We wish you all the best.

Yannick Dalmas (born 28 July 1961 in Le Beausset, Var)  former racing driver from France. He participated in 49 Formula One Grands Prix, debuting on 18 October 1987, but qualified for only 24 of them. His best result in F1 was a 5th place at the 1987 Australian Grand Prix, but he was not eligible for World Championship points at that race. His F1 career was blighted by his health issues, towards the end of 1988, Dalmas was diagnosed with Legionellosis which understandably caused him to miss the final two races. He recovered before the start of 1989 but his illness had clearly affected him.

In 1994, Dalmas made a brief return to Formula One with Larrousse, but only entered two races. He crashed in Italy, and finished two laps off the lead in Portugal.

Vettel edges out Fernando Alonso for pole in Germany.

Liuzzi crashes out hitting the pit wall in Q1

Sebastian Vettel: Yeah, it would be interesting to calculate how much it is, two thousands of a second. It was very, very close. All session Fernando was really strong and in general the Ferraris are very competitive here. We knew it would be a difficult session but two thousands of a second is not really the margin you are looking for, so we had to push very hard. It was extremely exciting especially Q3. I knew that both times I had only one lap to get it right here. There are some places that lead you easily into a mistake, so it was close. You push a little too much and you lose the edge of the tyres and then you start to feel you are losing the time, so my last run wasn’t 100 per cent perfect. I had a little bit here and there where I went a little bit above the limit and it cost a little bit of time but in the end it was enough by nearly nothing to stay ahead and get on pole. So extremely happy. First time on pole at home, but the main challenge will come tomorrow. I think we do have a very strong car here and it will be a tough fight against the red cars I guess. 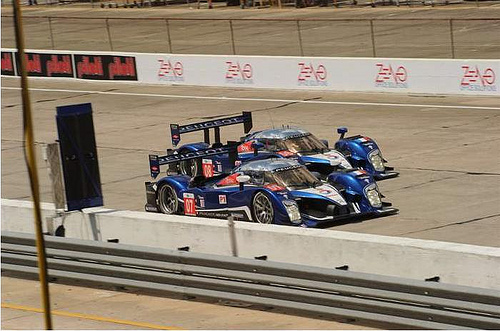 Peugeot take an easy 1-2 victory at the Sebring 12 hours.

Sebastien Bourdais has lost his mount at Toro Rosso. Hopes and dreams dashed like another Red Bull Academy of Talent graduate, Scott Speed, who also crossed the Atlantic looking for fame and fortune in the glamour profession that is Formula One.

“Red Bull gives you wings”. The Austrian energy drink company, headed by self-made billionaire, Dietrich Mateschitz, has funded and fostered many young racing talents from all over the globe. But they have also become the Scissor-hand of motor racing.

Quick to clip. Just ask Vitantonio Liuzzi. The Italian won world karting championship and then dominated the final F3000 season in 2004 before the series became GP2.
He became a victim of “home boy” syndrome as Red Bull tried to give wings to their young Austrian driver Christian Klien’s career. Unable to turn him into the next Rindt or Lauda, both Speed and Liuzzi experienced the extreme urgency to perform to their master’s liking.

The hostile and “we are not running an F1 kindergarten” environment provided to Toro Rosso drivers by Franz Tost and company may not be the best way to motivate young drivers. Fact remains there are no second chances in Formula One. Once there you have to deliver, as in the words of ex-Williams Grand Prix driver, Derek Daly, “there is no where to hide”.

The Garden of Formula One of red roses and silver linings is famous for fairy tales. Be it in the form of out qualifying your teammate and McLaren’s regular second driver, Jochen Mass, on your Grand Prix debut like Gilles Villeneuve at Silverstone, 1977. Or taking your Toleman-turbo in the wet streets of Monte-Carlo in 1984, to fight for the lead with the Professor in only your sixth Grand Prix start.

Back to Bourdais: Born and bred in Le Mans, famous for it’s annual 24 hours race, Sebastien Bourdais knocked on the doors of Formula One once before. After winning the 2002 Formula 3000 Championship he lost the Renault test-driver seat to Franck Montagny. Entry was denied, as reported in some circles, due to Bourdais’ refusal to sign boss man Flavio Briatore as his manager.

Crossing the Atlantic, under management of David Sears of Super Nova team, Bourdais found fame and fortune and dominated the Champ Car series winning the championship four years in a row from 2004-07.

With nothing to prove on this side of the pond, and the desire of wife Claire to raise their daughter in Europe, Bourdais hooked up with Nicholas Todt, son of ex-Ferrari team manager Jean Todt, and landed in Formula One with Toro Rosso, now a Red Bull Junior team but which stared life as Minardi and launched the careers of Fernando Alonso and latest Grand Prix winner Mark Webber.

Rocky roads and relationship lay ahead for the Frenchman. Claims of car not suited to “my driving style” and constant comparisons with the new German wunderkind and teammate, Sebastian Vettel, did not help nor endear him to Tost and his troops based in Faenza, Italy.

Deliverance and breathing room was provided by the departure of the talented Mr. Vettel to the senior Red Bull team at the end of last season. Toro Rosso replaced the German Sebastian with Swiss Sebastien, rookie Buemi, who was unable to beat Romain Grosjean both in F3 Euroseries and GP2, the official kindergarten of Formula One.

Buemi surprised many by out qualifying teammate Bourdais in the season opener in Australia. Rumors and vultures started to circle over Bourdais’ seat before the circus arrived for races on the European continent. Out qualified by Buemi in seven of the nine races so far, writing was on the (pit) wall as Bourdais was given a pat on the back by Giorgio Ascanelli, the Toro Rosso Technical Director, after his retirement from the German Grand Prix last Sunday.

"In Sebastien’s second year with us, the partnership has not met our expectations and therefore we have decided to replace him as from the next round of the World Championship, the Hungarian Grand Prix," Team Principal Franz Tost stated in a statement released by the team on Thursday.

Bourdais is now contemplating legal action against Scuderia Toro Rosso and is consulting with his lawyers to see if the team breached its contract with him.

In a statement released Thursday, Bourdais said, “I am very disappointed and shocked by the decision taken by Scuderia Toro Rosso of not allowing me to drive for the team until the end of the current season.

“I consider that, in doing so, Scuderia Toro Rosso has breached its contractual duties towards me; also I believe that nothing in my behaviour would legitimate a decision of the team to terminate the contract.

“I think that the team’s decision is in clear violation of Scuderia Toro Rosso’s obligations under the agreement. I have instructed my lawyers to review the situation including the possibility of issuing legal proceedings.”

High hopes Jaime: Jaime Alguersuari, youngest winner of British Formula 3 Championship last year, is widely tipped to be the replacement driver. If his Hungarian rhapsody and Grand Prix debut is played out in the next round at Hungaroring, it will make the Spaniard from Barcelona the youngest driver, aged 19 years and 125 days, to start in a Formula 1 world championship event.

Ironically, this weekend the driver is competing in World Series by Renault event at Le Mans, Bourdais’ home town. By the end of the season the hype and steam will clear and results will tell if Jaime is on his way like Vettel or another ‘toast by Tost’.