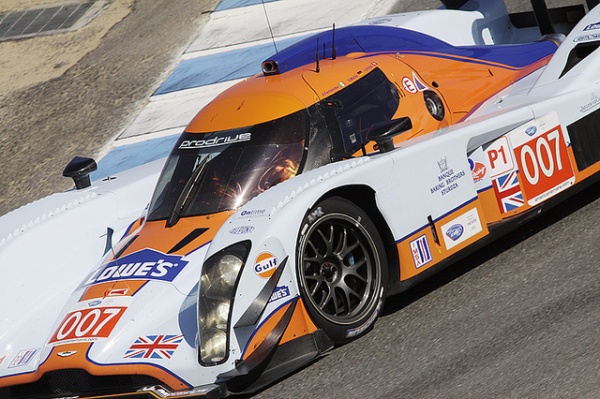 F1weekly podcast number 575 with the Spanish GP review and

Adrian Fernandez began his career by racing motocross at age eight. He entered his first auto race in 1981 at the “24 Hours of Mexico” and at the age of 15 he made the permanent move to cars in 1982. From 1982 to 1984 Fernandez competed in the Formula Vee Championship taking the title in ’83 and ’84. He also raced in the Formula K Series in 1984, competing in that series through 1986. He finished in the top four in the standings all three years in Formula K.

His talent apparent, Fernandez made the jump to the CART IndyCar World Series in 1993, competing in five races for Galles Racing International. He ran his first full CART season in 1994 with Galles finishing 13th and capturing the “Marco Magania” and “Luchador Olmeca” awards and the “JAC” trophy for “Best Driver” outside Mexico. Competing again with Galles in 1995, Fernandez finished 12th in the standings placing in the top ten nine times.

Fernandez moved to Tasman Motorsports in 1996. He had six top ten finishes, including his first career CART victory at Toronto. Unfortunately his delight at taking his first win was dampened by the fatal accident suffered by Jeff Krosnoff late in the race. The win in Toronto made him the first Mexican to win a CART event since Hector Rebaque in 1982, and Fernandez went on to finish 12th in the season points tally. However, 1997 was a disappointing season for Fernandez. The Tasman team ran a Lola chassis which failed to perform to expectations. Through force of will, determination and talent, Fernandez battled to three top ten finishes and 18th place in the PPG Cup standings.

Fernandez joined Patrick Racing for the 1998 season and proved his ability to challenge for the championship. He enjoyed 14 top ten finishes with eight top five placements and two victories, Japan and Mid-Ohio, en route to a fourth place showing in the PPG Cup race during the 1998 Fed Ex Championship. He captured his first career pole at Michigan and led the championship race for the first time in his career. Unfortunately once again Fernandez was touched by tragedy – a crash at Michigan resulted in an errant wheel from his car flying into the stands and killing three spectators. However, it was his victory during the Miller Lite 200 that gave Patrick Racing one of its most memorable moments when Fernandez stood atop the podium next to his teammate Scott Pruett. Fernandez was also named the “Athlete of the Year” in Mexico.

In 1999, enjoying his most successful season so far in the CART series, Adrian Fernandez behind the wheel of the #40 Tecate/Quaker State Reynard Ford-Cosworth completed the year sixth in the championship battle. He led the points series early in the season for the first time in his CART career, however an accident at Detroit resulted in a fracture in one of his hands, forcing him to sit out for several races. However he won at Motegi, Japan at the Firestone Firehawk 500 and at the Marlboro 500 at Fontana, California – a race marred by the death of good friend Greg Moore. In addition, he was selected to participate in the IROC series during 1999 where he competed against other top-named drivers including NASCAR drivers Jeff Gordon, Terry Labonte and Dale Earnhardt. Fernandez solid racing career which began in 1993, now has 80 total starts in the series. Of those starts he has finished in the top ten 41 times throughout his seven-year career.

In 2000 Fernandez had his best season in the CART series, coming close to winning the championship despite not starting on the front row all season. He scored points in 17 of the 20 races including 2 wins at Rio de Janeiro, Brazil and Australia, and 3 further podium results. He finished second to Gil de Ferran in the championship.

In 2001 he founded Fernandez Racing, with former Ganassi manager Tom Anderson as his partner, and ex-F1 driver Shinji Nakano as his team-mate. He finished 3rd twice and took 2 poles that year, but his team’s first victory came at Portland in 2003, the first win for an owner-driver since Bobby Rahal achieved the feat in 1992. That year he also ran an IRL entry for Asian-American Roger Yasukawa, in partnership with Aguri Suzuki, and for 2004 he moved the whole team to the series. Despite taking 3 wins and 4th overall in the 2004 IRL, he was unable to secure funding to race in 2005 – Delphi was driver Scott Sharp’s personal sponsor while engine suppliers Honda insisted on Japanese driver Kosuke Matsuura in the second car.

In 2005 he drove the 5 Lowe’s / Hitachi Chevrolet in Mexico for Rick Hendrick in the first NASCAR Busch Series race held outside the United States. In this race, (called the Telcel-Motorola 200) Fernandez raced in a one time ride to help promote NASCAR racing to the local fans. He led several laps in the race before giving up the lead to eventual race winner Martin Truex Jr.. It was announced that he would run 4 more races in the Busch Series for Hendrick Motorsports, but he did not run up front at any of those races. In 2006 he competed in 2 Busch races for Hendrick and competed full time in the Grand-Am series for his own team with Lowe’s sponsorship.

In 2007, he moved the team to the American Le Mans Series LMP2 class as an Acura factory team. His teammate will be fellow Mexican and Grand-Am veteran Luis Díaz.

On October 10, 2009, Adrián and his co-driver Luis Díaz won at the Mazda Raceway Laguna Seca in Monterey, California. With this victory the Lowe’s Fernandez Racing Acura ARX-01B concludes the season with the drivers’ championship and teams’ championship of the American Le Mans Series in the LMP2 category.