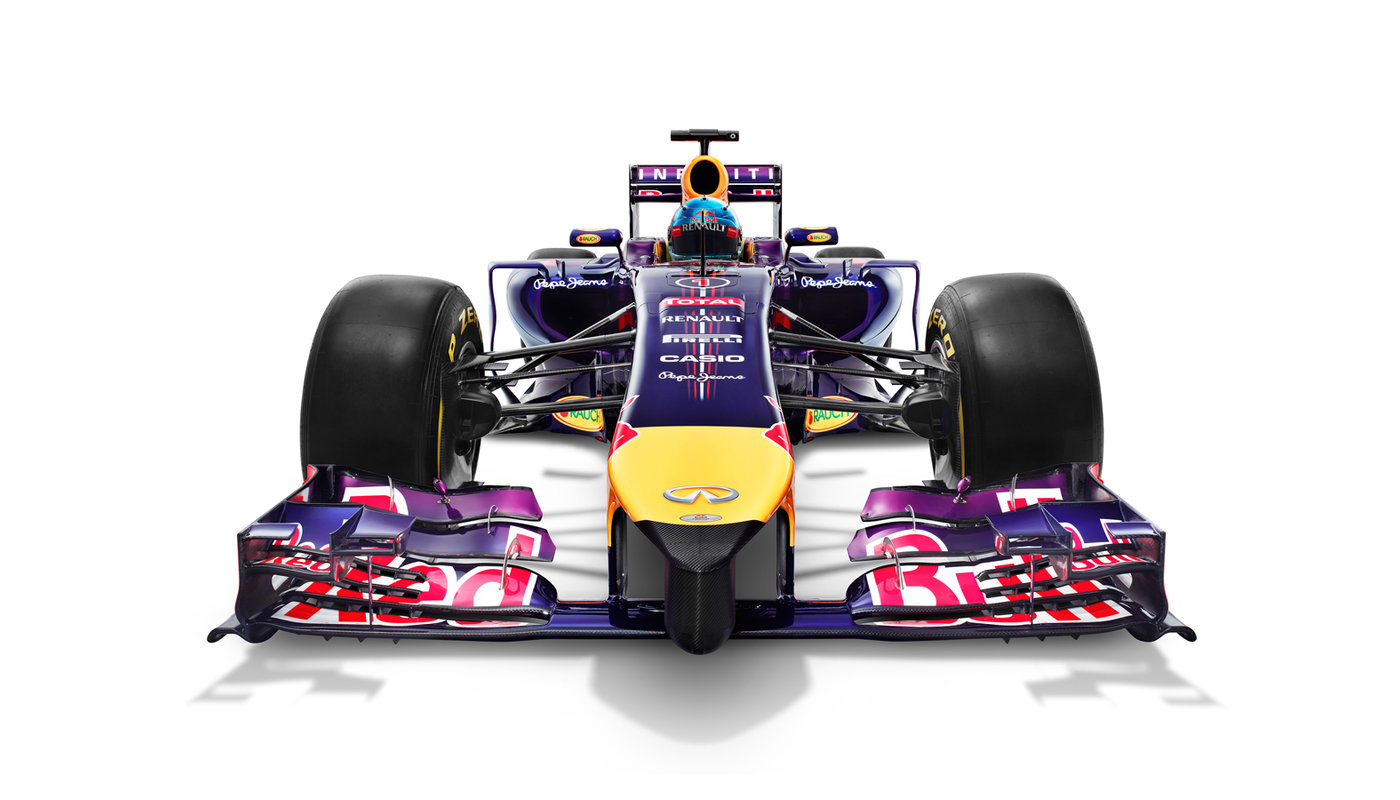 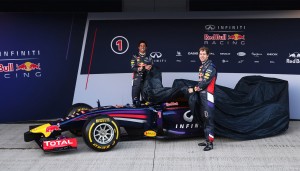 RED BULL’S TENTH SEASON STARTS HERE: THE RB10 REVEALED
Infiniti Red Bull Racing today revealed the RB10, our challenger for the 2014 Formula One World Championship and our first interpretation of F1’s radical new technical regulations.
Unveiled in the pit lane this morning at the Jerez Circuit ahead of the first day of testing, the RB10 is powered by the Renault Energy F1-2014.
As a team we have enjoyed hard-fought success in recent years winning the last four Drivers’ and Constructors’ titles. Now the game changes and due to the new regulations, the RB10 has little in common with its predecessors.
We’ve loved the last nine seasons, our tenth starts here…. 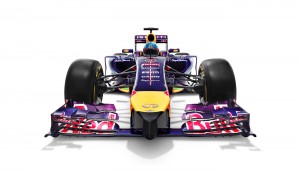 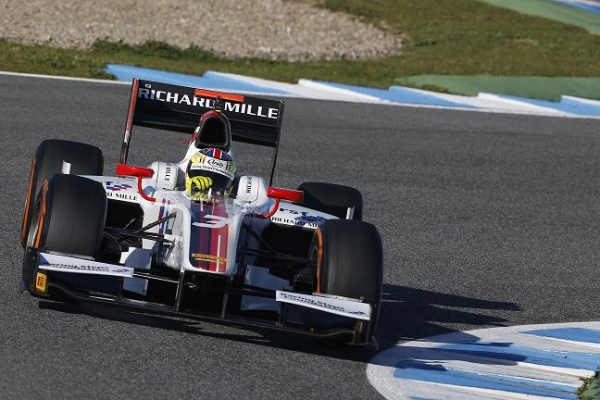 JAMES CALADO ON TOP ON FINAL DAY OF TESTING AT JEREZ-

ART Grand Prix driver ends final pre-season test day at the top of the timesheets
James Calado concluded his week’s work in the best possible way. Lasts season’s best rookie was quickest today at Circuito de Jerez with a laptime of 1:24.659 set this afternoon. Adrian Quaife-Hobbs set the best laptime in the morning for newcomers MP Motorsport.
The final day of GP2 Series testing in Jerez started in a different setting as overnight rain dampened the circuit. When the pitlane opened, most drivers opted to feed to the track on wet weather tyres. The sun was quick to make a welcome appearance though. Johnny Cecotto set the early pace, but as the track dried up and drivers switched to hard or medium compounds, the laptimes improved slowly. It was a trouble free session bar a short red flag, courtesy of Cecotto who stopped on track. Stéphane Richelmi was the first man to dip under 1m28s, but his teammate Marcus Ericsson claimed the top spot as the session entered into its final hour.
In the closing minutes, the proceedings were briefly halted after Jolyon Palmer stopped his Carlin car on track. At the restart, Quaife-Hobbs snatched the top spot from Ericsson. Richelmi also improved on his teammate’s best laptime to finish P2. Behind the DAMS duo, the top ten was completed by Daniel de Jong, Felipe Nasr, Robin Frijns, Simon Trummer, Stefano Coletti, Nathanaël Berthon and Mitch Evans.
After a short one hour lunch break, everyone took advantage of a dry track to do more race simulations and pit stop practices. The session ran smoothly with James Calado taking control of the timesheets towards mid-session, breaking the 1m25s barrier. His laptime of 1:24.659 was enough to have him sit pretty on top until the chequered flag. Behind the Brit, Trummer, Fabio Leimer, Coletti, Richelmi, Ericsson, Palmer, Evans, Julian Leal and Kevin Giovesi completed the top ten. The session was briefly red flagged with ten minutes left on the clock as Evans stopped on the track.
The teams will now make their way to Barcelona and set up camp at Circuit de Catalunya where the second and final pre-season test session will take place next week on March 5th, 6th and 7th. 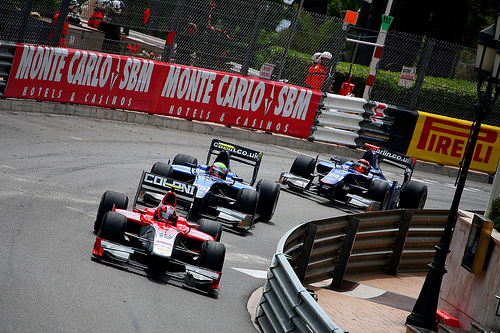 First three-day pre-season test session opens tomorrow in Spain
The 2013 GP2 Series officially kicks off tomorrow for the first test session of the year at Circuito de Jerez in Spain. Teams and drivers have gathered at the Spanish track for three days in order to prepare for the ninth season of the category which will open in twenty-four days in Sepang, Malaysia.
Fresh faces mix with familiar ones as the field reshuffles. Reigning champions DAMS will try and retain their crown and trust Marcus Ericsson and Stéphane Richelmi to help them in that challenge whilst last year’s rivals ART Grand Prix have bet on 2012 GP2 best rookie James Calado and 2012 GP3 Series runner-up Daniel Abt. Last season’s Monaco king Johnny Cecotto Jr has moved to Arden International and will be partnered with 2012 GP3 Series Champion Mitch Evans.
Local heroes Racing Engineering will start this new season with returnees Fabio Leimer and Julian Leal whilst Carlin have chosen to put their faith in Felipe Nasr and Jolyon Palmer, and Barwa Addax Team have bet on Jake Rosenwzeig and Rio Haryanto. First driver to be signed for 2013, Stefano Coletti has moved to Rapax along with Simon Trummer. Newcomers MP Motorsport have announced they will be debuting in GP2 with Adrian Quaife-Hobbs and Daniel de Jong.
It will be a real test for Caterham Racing’s Sergio Canamasas and Ma Qing Hua in Jerez along with Nathanaël Berthon and Robin Frijns at Trident as both squads have yet to confirm their 2013 line up. Also new to the Series, Hilmer Motorsport will make their first appearance with returnees Tom Dillmann and Pal Varhaug at the wheel, whilst Venezuela GP Lazarus – who have already signed Rene Binder for the season – will test Kevin Giovesi this week.
Lastly, iSport International will not take part in this week’s session in the hopes of focusing on finding a new partner for the season and expect to be joining the rest of the field next week in Barcelona for the second and final pre-season test session.
Pirelli have selected two different compounds for these three days: Hard (Prime) and Medium (Option). Each driver will be supplied with five sets of Prime and two sets of Option.
The session will start tomorrow at 09:00 local time and will run until 12:00. After a two hour break, the proceedings will resume until 17:00.
F1Weekly Podcast # 824