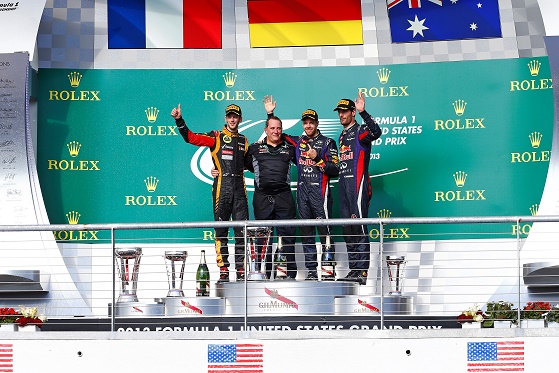 Renault-powered cars locked out the podium in the USA Grand Prix at Austin today, with Sebastian Vettel (Infiniti Red Bull Racing) securing a dominant win over Romain Grosjean (Lotus F1 Team) and Mark Webber (Infiniti Red Bull Racing). It is the fifth time this season that Renault engines have had a clean sweep of the podium following success in Bahrain, Germany, Korea and Japan.

Williams F1 Team returned to points-winning form and secured 8th with Valtteri Bottas – the first F1 career points for the Finn. Pastor Maldonado, who had started from 18th, had a tougher race and passed the flag in 17th.

Lotus F1 Team’s new recruit Heikki Kovalainen, replacing Kimi Raikkonen for the final two races as he undergoes back surgery, had a stellar return to the cockpit, qualifying in P8 for his first Grand Prix in a year. The Finn raced in the top ten until a pit stop to change a broken front wing dropped him to 17th. Unfortunately, with his KERS not functioning, he could make no progress through the field and finished in 15th.

With one race remaining, Infiniti Red Bull Racing now has 553 points, Mercedes 348, Ferrari 333 and Lotus 315. The next race in Brazil comes in just one week and will be the swansong for the Renault RS27 V8 engine.

A great result yet again for both Infiniti Red Bull Racing and Lotus F1 Team, giving a perfect podium for Renault power. It’s a great result for everyone at Renault, particularly on the penultimate race for the V8 engine. That’s the 51st win for the RS27 and the 59th for the V8 – a record we can be proud of and hope to extend as the season draws to a close next week in Interlagos. It’s also really gratifying to see Williams score competitive points today. The package has been improving steadily in the final part of the year and the points came on merit.

There’s still everything up for grabs in the last race next weekend – we’d love to help Lotus to secure third in the constructors’ championship and for Caterham to snatch that 10th position as well. It’s very motivating as we head to the final race of the season and the final race of the V8 era.

Tell us about the Indian GP circuit?

It is not an easy track, because of a few complicated rhythmbreakers  that are in there. The most difficult part is the uphill entry to Turn Three, because seeing the apex is practically impossible. So to drive a perfect lap around the Buddh circuit, you need a good driving instinct.

So far everything has always gone perfectly for us in India. There is also a very nice trophy at the end of the race – so it would be great to hold one again this year! It’s a circuit that I like, in a country that is very, very  impressive every time we go there.

What do you enjoy most about India?

It’s an extremely unique country for lots of different reasons, culturally there’s lots going on and you’ve got some pretty spectacular cities, busy cities. I’ve tried some of the local food and it’s really tasty, and obviously spicy, but I don’t mind that!

The track is good. I think they’ve done a good job with the circuit, it’s a place where you can really put a Formula One car on the limit and it’s quick. It’s a very demanding track for the car and driver. It’s probably very similar to the old Turkey circuit, but the middle sector is very similar to Silverstone it’s very, very fast, but has some undulations as well. The undulations are quite good and quite cute; they’ve put them in some challenging areas for us. 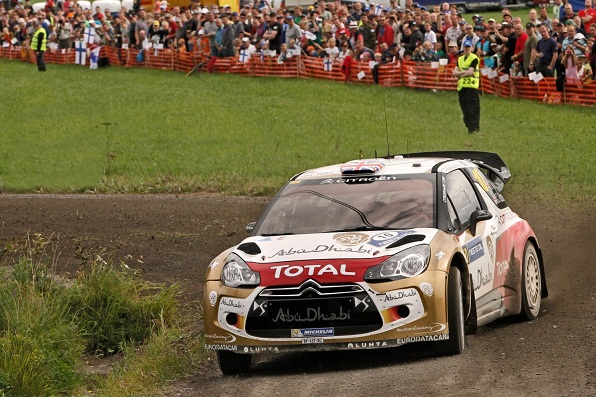 Nominated by Al Qassimi to drive his Abu Dhabi Citroën Total DS3 in last week’s eighth round of the WRC series in Finland, Meeke was lying fifth overall until he rolled and went out of the event near the end of the penultimate stage.

Despite the setback which denied Meeke his reward for a hugely impressive drive, Al Qassimi says he could be given other chances in the WRC, where results this season have been disappointing for the partnership between Abu Dhabi Racing and eight-time manufacturers champions, Citroën Racing.

Making his first appearance in the WRC for more than 18 months, Meeke closely tracked team-mate Mikko Hirvonen in Rally Finland while completely outpacing Spain’s Dani Sordo in the other Citroën Total Abu Dhabi DS3 to earn a huge amount of praise from all round.

“He did an excellent job, and I wasn’t surprised,” said Al Qassimi, who missed the event because of other commitments. “He was up there with Mikko and much quicker than Dani, and he’s given us a lot to think about.

“Our first priority is to get the best we can out of our drivers for the rest of the season, and we need to be on the podium. But already we’re looking ahead to next season, and Kris could get more chances.”

Added Al Qassimi: “He’s a very good driver, that’s why we picked him. We considered several drivers, but decided Kris would be the best choice and he proved us right.

“It was just unfortunate that he didn’t get the finish he deserved. I really felt for him, especially as I rolled in the same car in the Acropolis Rally.”

Al Qassimi is now fully focused on his return to WRC action at the wheel of his Abu Dhabi Citroën DS3 in Rallye Deutschland on 23-25 August.

In addition to looking for his best WRC finish of the season, the UAE driver will also be hoping for similar from Hirvonen and Sordo – placed fourth and fifth in Finland – as they try to narrow the 55pt gap to manufacturers championship leaders Volkswagen.