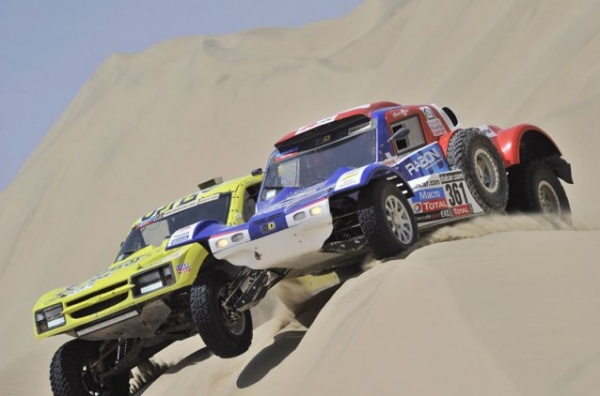 HE ONLY STARTED 30TH… but by the time he got to Nazca he’d already left almost 20 other riders in the dust. Francisco López took his second stage win in three days at the 2013 Dakar. In the car category, Nasser Al-Attiyah won his 15th special at the Dakar, while the X-Raid team’s delight at seeing Stéphane Peterhansel seize the overall lead was tempered by the injuries and withdrawal of key driver Pole Krzysztof Hołowczyc.

Leading the field can prove costly. It’s a strategic factor that must be taken into account in the Dakar. Yesterday’s heroes are often today’s losers. And this is exactly what happened to Joan Barreda and his fellow travellers towards the start of the stage. Yesterday’s winner was followed by Pedrero, Fish and others as he carefully performed his duties. He avoided the most dangerous pitfalls by focusing 110% on the road book… meaning he could only maintain a leisurely pace. Meanwhile, the most experienced riders started quite far back but they seized their chance to overtake the entire field without having to wrack their brains navigating. And few are better at this than Francisco López: the leading group went through the km 39 checkpoint at no more than 50 km/h, but Chaleco blasted onwards at 100 km/h. The Chilean was rewarded with his eighth Dakar win, the second of this edition. But he didn’t take over the lead. Cyril Despres is no slouch either when it comes to experience and strategy, and he’s got a knack for recognising the key points where he can make the difference. Today’s third place behind Chaleco and Paulo Gonçalves was enough for him to take the overall lead with a margin of 2′51″ over López, 4′59″ over Pål Anders Ullevålseter and 6′03″ over Olivier Pain.

Today’s stage also saw a repeat winner in the quad category, as Marcos Patronelli grabbed his second stage this year and slightly bolstered his position… despite having to deal with a slowly deflating tyre which forced him to slow down 30 km from the finish! The Argentinean driver now commands a 21′18″ lead on his nearest competitor, Sebastian Husseini. One of the first casualties of this war of attrition was Tomás Maffei, third in 2012, who has a deficit of 1 h 35′ to make up on Patronelli in the overall.

Today saw the opening of hostilities in the car category. Only last evening, Nasser Al-Attiyah and Carlos Sainz were sharing a pleasant meal in Pisco with Stéphane Peterhansel and Nani Roma. Yet the Qatar Red Bull Rally Team’s Spanish driver had already filed a complaint which would result in his table partner being stripped of both the stage 2 win and the overall lead! The race officials decided to deduct the time he’d spent looking for a waypoint which hadn’t been “validated” by a malfunctioning GPS, leaving Sainz to lead the field on its way to Nazca.

The Matador’s streak was cut short by electrical problems which forced him to stop several times and cost him roughly half an hour, but Nasser Al-Attiyah took over and kept the Qatar Red Bull party going. The Qatari started in seventh place and went on to overtake all those in front of him except for Peterhansel. It was a great day at the office for Al-Attiyah, who climbed from seventh to second overall. It’ll be harder for Robby Gordon to bounce back, but the American cut his deficit from 55′ in Pisco to 46′ in Nazca. The other big winner was Stéphane Peterhansel, who reclaimed the overall lead he thought to have conquered yesterday.

But don’t expect the X-Raid team to be all smiles tonight. While their captain was filling the bill, Krzysztof Hołowczyc crashed 39 km into the special. His Mini jumped over a dune and had a rough landing which hurt the Polish driver’s back and ribs. His co-driver Felipe Palmeiro emerged unscathed.

Only one driver has managed a hat-trick of wins in this year’s Dakar, and it’s none other than Gerard de Rooy. The Dutch truck driver’s flawless performance inspired teammate Miki Biasion to a third place finish. It also was the first time in the 2013 Dakar that the Kamaz team managed to put one of its trucks in the Top 3. Eduard Nikolaev only lost 1’24” today and now lies 21’44” behind the defending champion in the overall classification.