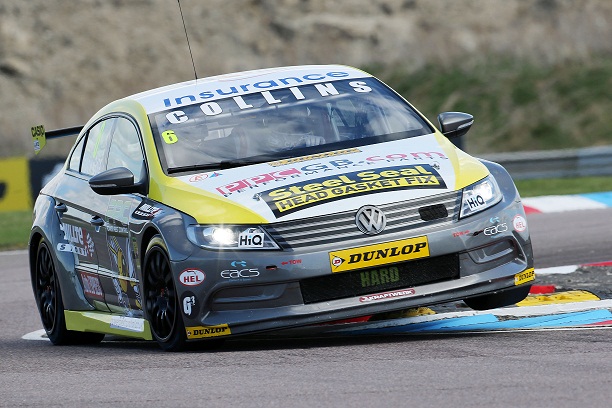 Pirtek Racing’s Andrew Jordan claimed the fourth pole position of his BTCC career after a blistering last gasp qualifying lap at Thruxton today (4 May). Jordan continued his run of qualifying in the first three positions at each round so far this season and also starting from the second row or higher at Thruxton in each of the last four years.
The 23-year-old – second in the current driver standings – waited until the final minute to set the ultimate pace that eclipsed the Honda Yuasa Racing pair of Gordon Shedden and Matt Neal.
Shedden looked set to secure his second pole position in as many rounds after an early dash of 1:16.894s saw the Scotsman dip under Jordan’s pole time from 2012. Both he and team-mate Matt Neal ran in tandem during the early laps, looking to gain a slipstream advantage at the high-speed Hampshire circuit, but Neal had to wait until a later run to force his way up the order into third.
MG KX Momentum had to settle for fourth and fifth with Jason Plato and Sam Tordoff respectively, but the team is still confident for race day tomorrow as both cars were carrying significant success ballast owing to their positions in the championship standings.
An exciting battle to get inside the top six ensued throughout the 30-minute session, as Jeff Smith, Tom Onslow-Cole and Frank Wrathall traded places on several occasions. It was Smith that eventually made the place stick, but the Pirtek Racing driver’s session ended off track after he ran wide at the ultra-fast Church corner and lost control of his Honda Civic.
Onslow-Cole produced an impressive performance in his VW Passat to hold off Wrathall’s Toyota for seventh. Dave Newsham and Colin Turkington rounded out the top ten – the latter completing a speedy spin that dislodged the windscreen from his BMW 125i M Sport just after he’d crossed the line to set his fastest time of the day.
Adam Morgan’s Toyota Avensis lines up on the sixth row of the grid after he pipped the Airwaves Racing duo of Aron Smith and Mat Jackson.
The battle for top spot among the Jack Sears Trophy runners ended in success for Joe Girling in his Chevrolet Cruze after a great late effort put him ahead of Lea Wood’s Vauxhall Vectra and James Kaye’s VW Golf.
All the action from rounds 7, 8, and 9 of the Dunlop MSA British Touring Car Championship taking place at Thruxton tomorrow (Sunday 5 May) will be screened live on ITV4 from 10:45.

Andrew Jordan said: “The car was fantastic and I’m looking forward to tomorrow. I was relaxed after the win at Donington and I love it here. I was really hanging on during the lap but it was a lot of fun. The timing wasn’t planned to be honest – it was tight to get the lap in. The car is great so it was down to me just to get the best out of it. We were carrying quite a bit of weight too as we’re second in the championship so we have to be really pleased with that.”

Gordon Shedden said: “I am looking forward to race day. I think I started 19th here last year after some problems so I’m much happier to be up the front. I am really happy with the balance we have in the car, and we’ll have our elbows out to go racing tomorrow. We need to close the points gap on the leaders and I think we’re in good shape to do that.”

Matt Neal said: “I thought we had the front row locked out with Honda Yuasa but at least we got beaten by another Honda – and it was still a Honda 1-2-3. It’s great to start near the front tomorrow and tyres will be critical. What you can’t see on the TV is that we’re always drifting through the fast stuff here and when you get to the edge of the circuit with no run-off curbs or anything, it’s a long way to the banking. It always makes for some good racing when you come to a great circuit like Thruxton.” 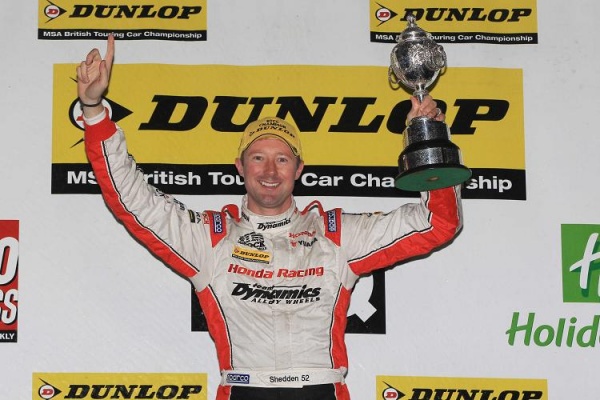 Matt Neal and first-time winners Aron Smith and Frank Wrathall shared the victories in today’s final three races of the Dunlop MSA British Touring Car Championship season on a wet Brands Hatch Grand Prix circuit. But it is Gordon Shedden who tonight leaves the world-famous Kent venue as the newly crowned 2012 Champion. Shedden, from Fife, becomes the first Scottish driver to lift the most coveted prize in UK motor sport since his own hero, John Cleland, in 1995…

In race two Dubliner Smith was in unstoppable form en route to his maiden BTCC race win in Redstone Racing’s Ford Focus, but second place and the fastest lap for Shedden was enough for him to put the title out of his rivals’ reach. Out-going Champion Neal was third to move back up to second in the standings past Plato who finished in fifth.

Similarly, the day’s third race, the last of the season, was also won in emphatic style by Wrathall whose victory was the first for himself, his small family-run Dynojet team and Toyota’s Avensis model. Taking second, third and fourth in a spectacular line-abreast, Honda formation finish were Neal, Shedden and Jordan.

For Shedden, being crowned BTCC Champion is a boyhood dream come true. The 33-year-old from Dalgety Bay commented: “All I ever wanted as a kid was to race touring cars – it was never about F1 – and it was John Cleland who was my hero when I used to go and catch a glimpse of the BTCC at my home track of Knockhill in Fife. I never thought I’d ever get the chance to race them, though, let alone win a race and now I’m the Champion. It is mind blowing… what a season, not just for myself but everyone at Honda. I’d also like to thank everyone who was cheering for me back home in Scotland today – including in the bar at Knockhill! I can’t wait to get home and celebrate with them.”
Shedden’s Worcestershire team-mate Neal, who has finished second in the standings, said: “Gordon has driven superbly all season, has amassed the most wins and massively deserves to be Champion. As a team we all pull together at Honda and the Civic has simply been the class of the field all year. A clean sweep of titles is the perfect result.” Oxford’s Plato, third in the final table, added: “I’m here to win so I’m obviously disappointed it’s not gone our way but, that said, the MG KX Momentum Racing team are still winners – we have far exceeded our expectations in MG’s first season back in the BTCC and will return much stronger for 2013.”

Meanwhile Lichfield’s Jordan was ecstatic. He beamed: “For Pirtek Racing to win both the Independent drivers’ and teams’ titles is terrific. We are growing all the time as a team of people and have had to beat rival teams and drivers of real quality.”

Similarly delighted were both Smith and Wrathall. Smith said: “Off the back of my first podium result at Silverstone two weeks ago, to now end my debut season in the BTCC with a first win is unbelievable.” And added Wrathall: “It’s a fantastic achievement for a small team like ours in only its second season at this level – we’d already had seconds and thirds and a pole position but a win means we’ve now ticked all the boxes.”
Elsewhere, race officials today punished one driver for an on-track indiscretion. Race 1: Andy Neate, official reprimand, fined £500 and three penalty points on his competition licence for an incident involving Frank Wrathall.

WRATHALL PIPS PLATO FOR CAREER FIRST
BTCC POLE POSITION AT SNETTERTON…
Frank Wrathall has spectacularly taken the first pole position of his Dunlop MSA British Touring Car Championship career at the Snetterton circuit in Norfolk.
The 25-year-old from Preston achieved pole in a time of 1m57.595s in his Dynojet Toyota Avensis to pip former double Champion, Oxford’s Jason Plato in his MG KX Momentum Racing MG6 by just 0.015s.
Wrathall’s pole is the first for a Toyota driver in the BTCC since 1993 and also a qualifying record for the championship around the Snetterton track.
Inverness’s Dave Newsham was also close to pole, just 0.054s away from Wrathall in third in his Team ES Racing.com Vauxhall Vectra.
An elated Wrathall said: “That was very close as Jason and I were trading fastest times but in the end I came out on top. I’d come back into the pit lane and knew he was out there giving it one final go, but it seems he made a mistake and went off the track – when the team told me I was shouting a lot in the car! To beat a driver of his stature makes it all the more rewarding and I’m delighted.”
Plato replied: “Congratulations to Frank – it’s always nice to see a young driver doing well, even if it is at my expense! The important thing is I’m ahead of the two drivers I’m chasing for the title and from here can start thinking about taking points back off them.”
And added Newsham: “Finally the Vectra feels like it did back at the start of the season when I had three really strong opening events. From what we’ve seen in the earlier practice sessions our tyre wear rate is also excellent so I’m hoping for three very strong races tomorrow.”
There were career-best qualifying results, too, for Preston’s Adam Morgan and Fleet’s Daniel Welch – a fine fifth and sixth fastest in their Speedworks Motorsport Toyota and Welch Motorsport Proton respectively.
But there were major frustrations for the two championship leaders, Honda Yuasa Racing Team team-mates Matt Neal and Gordon Shedden. Worcestershire’s Neal was a lowly seventh by his standards and Fife’s Shedden 22nd and last after on-going problems with his Civic – which had suffered a major fire in practice this morning – prevented him from setting a time.
Elsewhere Warwickshire’s Mat Jackson, another of the championship’s top names, qualified the Redstone Racing team’s all-new Ford Focus ST an encouraging 16th fastest on its debut. The Focus, only completed at 7.00am, becomes the seventh different make of car to be built to the BTCC’s new and much-applauded NGTC regulations…
F1Weekly Podcast # 819