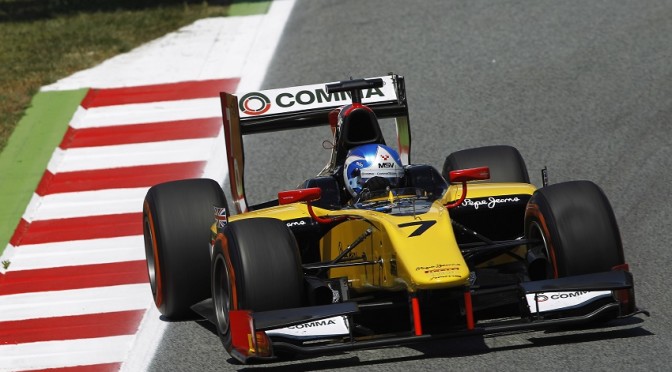 Palmer leads the way in free practice
Jolyon Palmer has opened his Barcelona weekend in fine style, leading his rivals for almost the entire forty-five minutes of this morning’s free practice session in Spain to claim the top spot on the timesheets ahead of Felipe Nasr and teammate Stéphane Richelmi.
The Briton stopped the clocks with a time of 1:30.448, with his rivals unable to get within two tenths of his best time, despite the conditions: the session opened under the expected hot and sunny conditions, with temperatures rising throughout.
Palmer was the first driver to set a time, and although Nathanaël Berthon and Simon Trummer briefly moved past him, the Briton improved on their times on his next lap, before setting a laptime just eight minutes into the session which was never bettered.
Nevertheless, his rivals gave it a good go, with improvements up and down the grid as they battled for best of the rest status: Nasr and Richelmi were ultimately split by just one thousandth of a second, finishing ahead of Mitch Evans, Daniiel De Jong, Stoffel Vandoorne, Daniel Abt and Rio Haryanto. With everyone intimately familiar with the circuit, this afternoon’s qualifying session promises to be a cracker.
Barcelona – Free Practice
FORMULA 1