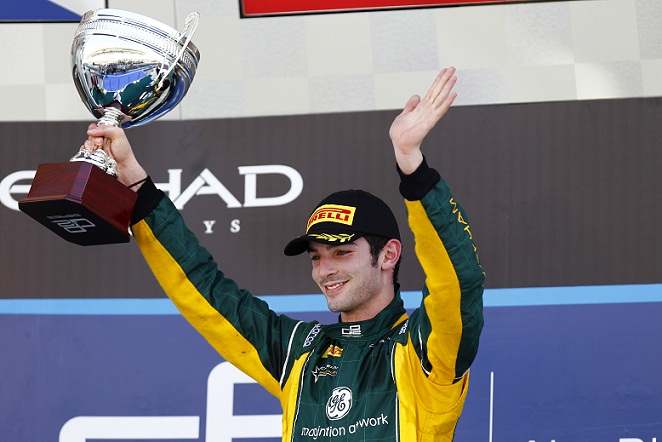 Alexander Rossi converted yesterday’s pole to today’s win, but not without a fight: the American had to scrap his way back past Jolyon Palmer to take his maiden Series victory, but most eyes were trained on the fight behind them where Fabio Leimer lost a podium finish to Marcus Ericsson but had enough points in the bag to grab the 2013 GP2 Series title.
The action exploded right from the start, where front row starter and title contender Sam Bird stalled on the grid just as the lights went out: Rossi was slow off the line as Leimer and Palmer blew past the pair, and with the Swiss driver’s eyes on a bigger prize he gave way to the Briton at turn one, with the American making up for lost time by sliding inside Leimer at turn two before heading off after the race leader.
A safety car period for a collision between Jon Lancaster and Tom Dillmann delayed their charge for a few laps, but when they were eventually released the front pair resumed their fight while Leimer held third comfortably from Dani Clos, Felipe Nasr and Ericsson, while Racing Engineering watched Bird fight back through the field and worked out the championship ramifications for their man.
The soft shod cars started coming in from lap 6, with Leimer the most notable early stopper on lap 10, but with most of his rivals on the medium compound there was more maths to be done on the pitwall as the teams worked out the difference in time on track plus an estimate for the stops to come, with Leimer slicing through traffic to fulfil his part of the bargain.
Rossi pitted from second on lap 18 for rears only, setting a blistering pace on his outlap and forcing Palmer to come in two laps later to cover him off, the team changing four tyres to be conservative, only to be heartbroken seconds later as Rossi screamed past into the lead: the Briton threw everything at his rival, but when the clock ran out it was Rossi who was greeted by the chequered flag first, with Palmer next across the line.
Behind them Leimer had fought off a hard charging Ericsson for lap after lap, but eventually gave way with his eye on a bigger prize: the Swede was delighted to grab another podium finish as Leimer crossed the line in fourth, his points lead now untouchable. Clos held off a late race charge  for fifth from James Calado, who powered by Nasr and Johnny Cecotto in the closing stages, with Daniel Abt holding on for P9 (from P25 on the grid) from Bird, who had thrown everything he had at the race for his championship tilt but just fallen short.
Leimer’s 191 points claims the 2013 title from Bird on 173 points, with Nasr on 154, Calado on 142 and Coletti on 135 points. The team’s title is still in the balance with just tomorrow’s sprint race remaining: Carlin leads RUSSIAN TIME by 273 points to 265, with Racing Engineering on 253 points ahead of DAMS on 220.
Abu Dhabi – Feature Race
Not Classified
Fastest Lap: Jolyon Palmer (Carlin) – 1:52.873 on lap 22
F1Weekly Podcast # 825