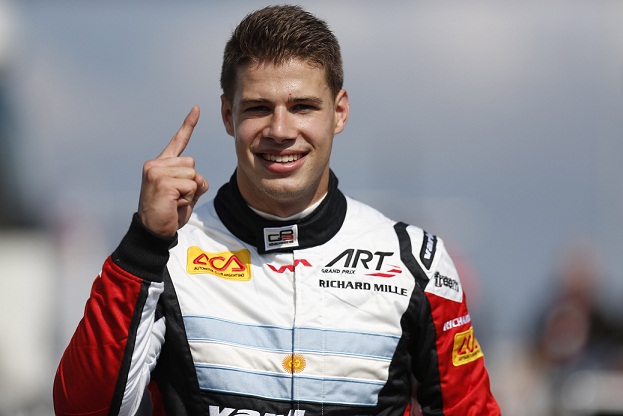 Regalia takes maiden pole in Nurburgring-
ART Grand Prix’s Facu Regalia narrowly beats Tio Ellinas to pole in Germany…
He’s done it! Facu Regalia is a happy man, after being so close to pole on several occasions this year, the Argentine driver promised to deliver a pole position and today he’s done just that. The ART Grand Prix driver will be joined on the front row with Marussia Manor Racing’s Tio Ellinas with just 0.054s separating the two. Jenzer Motorsport’s Alex Fontana will start in third on the second row.
A beautiful, warm morning greeted the GP3 paddock as the 27 drivers made their way onto the track ready for the 30 minute fight for pole. Bamboo Engineering’s Melville McKee was first out with his teammate Lewis Williamson first to lap in the 1m45s bracket ahead of Daniil Kvyat (MW Arden) and Carlin’s Nick Yelloly.
Kevin Korjus (Koiranen GP) out-braked himself and lost time on one of his hot laps, but was soon  back on the pace next time around and went straight to the top of the timesheets. His teammate Aaro Vainio had a small off track excursion but was able to continue. Williamson reclaimed his position back at the head of the timings at the midway point of the session, as the drivers returned to the pits for new rubber ready for their flier.
Regalia rose to P1 before Ellinas lit up the timing screens in purple to become the first driver to set a time in the 1m44s. The positions were swapping every few minutes with Kvyat lapping two tenths faster than the Cypriot to snatch top spot with Status Grand Prix’s Alexander Sims moving into second.
Ellinas was on a mission regaining P1 by almost four tenths of a second but Regalia was determined to make pole position his and within the final seconds, the ART Grand Prix driver demoted the Marussia Manor Racing driver to second and he celebrated his debut pole in the category, Fontana qualified third ahead of Jack Harvey (ART Grand Prix), Williamson, Yelloly, Sims, Kvyat, Korjus and Carlos Sainz (MW Arden).
Race 1 will take place at 17.20 GMT later today and promises to be an exciting encounter, will we see a seventh different winner?
Qualifying
F1Weekly Podcast # 819