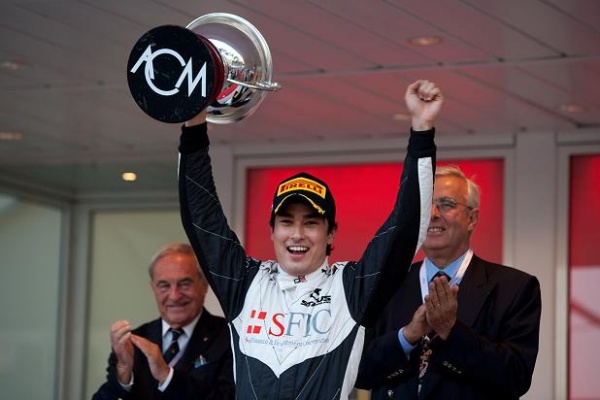 Reverse Pole man Marlon Stockinger celebrated his first win of his GP3 career after producing a lights to flag victory on the famous street circuit in Monaco in a memorable race!

The start was dramatic with a spectacular incident at the exit of Sainte Devote after Alex Brundle tapped the back of his Carlin team mate William Buller which sent Buller’s car into the air and landed upside down. The safety car was immediately deployed and luckily Buller was able to climb out of the car unscathed after a nasty looking shunt. The accident also ruled Brundle out of the race.

Stockinger defended his lead at the start with Daniel Abt trying to sneak past Antonio Felix Da Costa but the Lotus GP driver had to hold station. After two laps, the safety car came back in and the race was restarted. The remaining Carlin car of Felix Da Costa set sights on P1, chasing Stockinger and desperately was looking for a way past. The Portuguese star started applying the pressure on the Filipino and stayed within half a second of the Status Grand Prix car during the race, eager to make a move.

Abt in P3 was a few seconds back from the two dicing for the win, ahead of Mitch Evans, David Fumanelli, Kevin Ceccon, Aaro Vainio and Tio Ellinas. There was to be more action further down the field in the second half of the race after Lotus GP’s Conor Daly caught the back of Dmitry Suranovich at the hairpin and the Russian driver lost his rear wing. As Suranovich continued on, struggling to keep control, Daly made contact with the rear of the Marussia Manor Racing car as they came out of the tunnel and became airborne, hitting the side fence at the side of the circuit. It was a shocking accident but the American was able to get out of his car and walk away unharmed.

It was the second time the safety car was deployed and after a few laps, the decision was made to stop the race for safety reasons as the fence was damaged. Therefore, Stockinger recorded his debut victory in GP3, as the result was declared after 14 laps. Felix Da Costa took second with Abt achieving his first podium in the Series. Evans, Fumanelli, Ceccon, Vainio and Ellinas rounded out the top eight. This result makes it four different winners from four races in 2012.

Vaino heads the standings after Round 2 on 54 points ahead of Evans on 43 and Stockinger on 39.

Round 3 takes place in Valencia on the 22-24 June with a GP3 test planned the week before.

The final pre-season test concluded in Silverstone today before the GP3 Series heads to Barcelona next month to kick start the 2012 season. The session got underway under dark clouds on a chilly morning at a slippery circuit which was declared wet at the start of the test. Maxim Zimin stepped into the Jenzer Motorsport and was fastest for the first hour until Tio Ellinas in his Marussia Manor Racing car took control of the timesheets. The morning test was eventful: five red flags occurred with several drivers getting caught out in the tricky conditions.

Antonio Felix Da Costa went top as the times continued to improve on a drying track as the drivers switched from wet tyres to slicks. Aaro Vainio then shot to P1 as the session was red flagged when Kotaro Sakurai spun off into the gravel. Ocean Racing Technology’s Robert Cregan suffered a technical issue when he was forced to stop on the circuit, giving a premature end to his morning test.

The position at the top of the timings then changed numerous times before Felix Da Costa regained his place back at the head of the standings. Conor Daly and Ellinas jumped up to P2 and P3 ahead of William Buller who was confirmed as driving for Carlin for 2012 this morning. David Fumanelli, Marlon Stockinger, Vainio, Daniel Abt, Matias Laine and Kevin Ceccon completed the top ten.

Following the one hour lunch break, it was the fastest man from day one, Mitch Evans who set the early pace in the afternoon. The New Zealander quickly improved on his best time from yesterday by a tenth of a second setting a lap of 1’50.150. Buller then made a trip into the gravel, thus causing a halt to proceedings. As the rest of the drivers concentrated on long runs and some pitstop practice, Laine had a quick, therefore a red flag arose. Within the final forty-five minutes, the rain began to lightly fall, as the session came to a close with Evans heading the pack again. Robert Visiou was a late addition to the top ten and went P2 in the dying stages ahead of Vainio, Fumanelli, Abt, Ellinas, Stockinger, Daly, Laine and Alex Brundle.

GP3 Series is next on track when the 2012 campaign begins at the Circuit de Catalunya in Barcelona on 11-13 May.