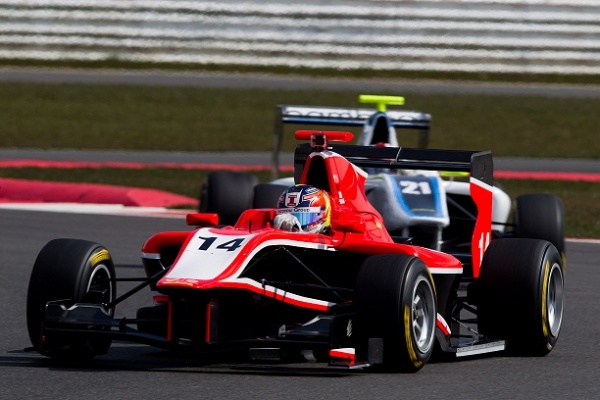 TIO ELLINAS ON TOP AT SILVERSTONE
Tio Ellinas recorded the fastest time in the afternoon session on day one of the official pre-season test at the Northamptonshire circuit. The Cypriot’s quickest time of 1:46.211 was 3.9 seconds quicker than the previous GP3 record set by Mitch Evans here in 2012 with the first generation car. Carlos Sainz Jnr set the best time in the morning session.
Very chilly temperatures greeted the GP3 paddock for the final two-day pre-season test. The sun may have been shining but with ground temperatures below zero as the test begun, the full grid of 27 drivers set their installation laps and returned to the pits and waited for the winds to die down and for the track to warm up.
Alex Fontana (Jenzer Motorsport) and Nick Cassidy (Marussia Manor Racing) were the first two drivers to set times in the 1m47’s with a hype of activity in the last hour with the majority of drivers braving the big freeze. Ellinas and David Fumanelli (Trident) shot to the head of the timings until Spaniard Sainz Jnr went half a second quicker than the Cypriot to end the morning on top.
At the chequered flag it was Ellinas, Fumanelli, Fontana, Cassidy, Daniil Kvyat (MW Arden), Nick Yelloly (Carlin), Giovanni Venturini (Trident) and the Koiranen GP duo of Aaro Vainio and Kevin Korjus.
Following the two hour lunch break, the session got underway with an early red flag for Regalia who stopped on the circuit whilst teammate Jack Harvey topped the timesheets. Melville McKee (Bamboo Racing) was P1 at the midway point when Luis Sa Silva (Carlin) ran wide at Becketts and kissed the barrier, whilst Fumanelli stopped on circuit which both caused small interruptions to proceedings.
Yelloly rose to P2 as the wind increased making driving conditions difficult. Regalia posted the best time of the day while Adderly Fong (Status Grand Prix) ran wide at Chapel at the latter stages of the day as there was a brief stoppage covered by red flags. With one minute left on the clock, Ellinas went a mere 0.036s faster than the Argentine to claim P1.
The final times saw Ellinas, Regalia, Yelloly, Ellinas, Harvey, McKee, Fumanelli, Robert Visoiu, Fontana, Korjus and Conor Daly, with the top ten drivers covered by a second.
Tomorrow’s test session will run from 09.00 – 12.00 a one hour break. The afternoon session will run from 13.00 – 16.00 GMT.
Day 1: Morning Session
Day 1: Afternoon Session*
*Carlos Sainz Jnr’s times deleted after his MW Arden car was found underweight 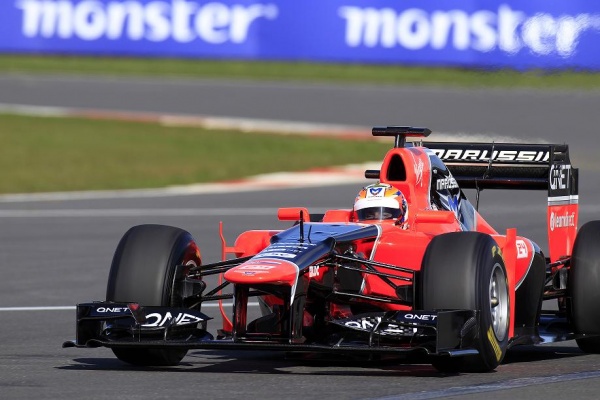 The MR01, the Marussia F1 Team’s contender for the 2012 season, has made its on-track debut. The Anglo-Russian team is running its new car for the first time today at Silverstone in the UK for a promotional event ahead of the season-opening Australian Grand Prix in Melbourne next weekend.

The MR01 is the product of a ground-up re-evaluation of the way the team designs its racing cars. As such, the car is almost entirely ‘new’ with very few carryover components from last year’s MVR-02. This presented the design team, led by Technical Consultant Pat Symonds, with the challenge of going back to basics to produce a solid mechanical package, whilst maintaining an eye towards achieving the incremental performance steps required to move the team forward.

People and Resources
The starting point for the MR01 design programme was a consideration of the Marussia F1 Team’s people and resources. The former three-base operation has been consolidated into one site, the Marussia Technical Centre in Banbury, bringing the various elements of the business together to form ‘one team’. In particular, the design department and practices now benefit from far greater integration and collaboration. Furthermore, the aerodynamic department has been completely restructured and the aero methodology reinforced, blurring the boundaries between CFD (Computational Fluid Dynamics) and experimental work in the wind tunnel, as well as enhancing the fidelity of the team’s aero approach.

The technical partnership forged with McLaren Applied Technologies in July of last year has been influential in the process and the relationship is starting to yield benefit as the advanced facilities that the Marussia F1 Team has access to have been used to prove the correlation process with the MVR-02. It is however early in the relationship and the MR01 will become a beneficiary of the relationship in due course.

Design Philosophy
The key design priorities were to address previous aerodynamic deficiencies and, mechanically, achieve greater weight saving. At the same time a lot of the detail of the car has been refined and the design team have been a little more adventurous than before, stepping closer to the engineering boundaries. The car can best be described as a significant evolution of its predecessors.

Driver Line-Up
Timo Glock commences his third season with the team, providing the all-important element of continuity required to keep moving the package forward. Timo is joined by Frenchman Charles Pic, who embarks on his rookie year in Formula One, having made the step up from GP2. Despite his 22 years of age, Charles has been racing in single-seater formulae for six years and has won races at every level.

John Booth, Team Principal, Marussia F1 Team, commented:
“We are very pleased to be running the new MR01 for the first time this morning. It has been a long and frustrating wait for everyone in the team but we can now get back on track – literally – and start working towards the first race of the season in Australia next weekend. Today is the first of two promotional events, so while the drivers will be able to get a feel for the car, they won’t be able to draw any real conclusions until we start running in anger in Melbourne. Nevertheless, this is an important day for us and we’ll enjoy every minute on track with the new car.”

Marussia F1 Team drivers Timo Glock and Charles Pic will each enjoy some track time with the car over the next two days, albeit with the car running on demonstration tyres as opposed to the Pirelli P-Zero 2012 season performance tyres. 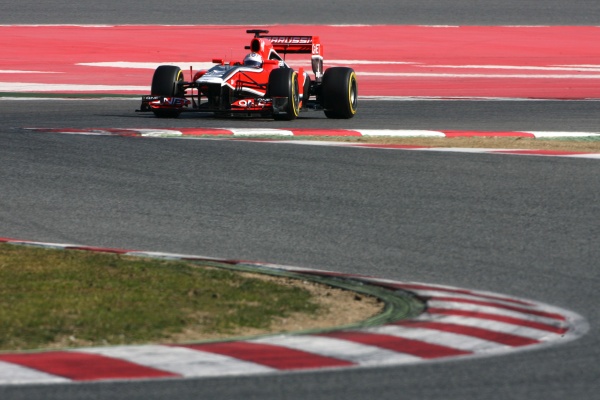 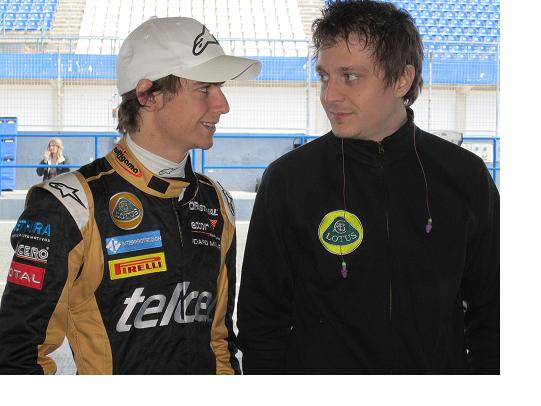 Jerez de la Frontera, Spain – Mexican driver Esteban Gutierrez is ready to participate in the GP2 official test sessions, which practically initiates the 2012 season of the Formula One feeder series.

The 4.428 km long circuit of Jerez de la Frontera, in Spain, is the stage where team Lotus GP and Gutierrez will do the necessary testing to have a better season start.

“Finally, we have begun after our off-season preparation, where we made a lot of improvement in every aspect such as the physical condition, and took time to analyze what happened last year to try and apply the findings on the new season.

“This season we will be able to put all of that in practice in a very concrete manner in every aspect, as we now have one year experience and I think that will be important; we have to focus on our selves and on the training to evaluate and achieve the improvement we want”.

Official training sessions are very good for the driver, as they represent the beginning of a journey to reach the objectives they have set for 2012, second year for Esteban in GP2.

“The objectives for the year are to be consistent and reach a high level of competitiveness as well as to improve the technical details so we can be strong in qualifying as well as during the race.

“The truth is, that these sessions are very useful because you can test different things in technical terms, you can try new developments although some tests are restricted, but we will be able to further develop part of our suspension and there we could find a little advantage”, he remarked.

Gutierrez expressed that after his GP2 debut last year, he arrives to 2012 with more self confidence and very motivated to have a better year.

The Marussia F1 Team is disappointed to confirm that the planned first test of its 2012 race car – the MR01 – has been delayed as a consequence of not passing the final FIA crash test.

All cars are required to pass 18 FIA-observed tests for homologation to be granted. Despite the fact that the MR01 has passed all 17 of the preceding tests, the regulations require the car to have completed all of the tests before running commences.

The team will now not take part in the final pre-season test in Barcelona later this week (1-4 March) and will instead focus its efforts on repeating the crash test at the end of the week.