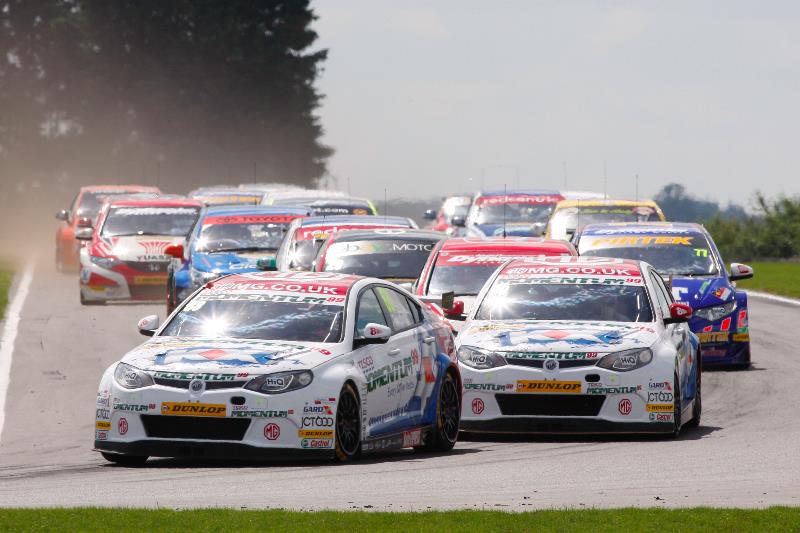 MG KX Momentum Racing driver Sam Tordoff secured the first victory of his BTCC career in Sunday’s opener at Snetterton, before the Hondas of Andrew Jordan and Gordon Shedden claimed a win apiece in races two and three respectively.

Proving something of a Snetterton specialist, having won there previously in both the Clio Cup and Carrera Cup, Tordoff stormed to his maiden BTCC pole position on Saturday and then duly backed-up his pace with a commanding lights-to-flag victory in race one.

Plato followed Tordoff home to secure MG’s second one-two finish of the season, whilst Shedden had to fend off late challenges from both Colin Turkington and Andrew Jordan to secure the final podium position.

While the first contest was relatively incident free, the final two races provided enough drama to last a whole season.

Jordan won an action-packed race two after he passed Turkington when the two made contact late on. Matt Neal blasted from ninth on the grid to finish second, and the ever-improving Ford Focus of Aron Smith took the first podium of the season for the Motorbase-run squad.

Plato had led the early running before his car ground to a halt with an engine problem, but his day was to take an even bigger twist in the final showdown. Fighting his way through the order on the opening lap of race three, his MG6 spun wildly on the run down to Hamilton before making heavy contact with the barrier, which tipped his car into a dramatic barrel roll. The two-time BTCC champion walked away unharmed from the spectacular incident although his championship hopes were obviously dented.

The drama continued after the restart and when Shedden honed in on early leader Turkington, the pair touched while racing for position. Turkington spun down the order as Shedden nipped through to take a comfortable win. The Scotsman’s victory proved to be the second success of the day for the Dunlop Sport Maxx Soft tyre after Jordan’s earlier race win.

Airwaves Racing enjoyed its best race of the season so far as Irishman Aron Smith took his second podium of the day behind team-mate Mat Jackson, who scored his first rostrum of 2013 with second place.

Honda Yuasa Racing’s Neal maintains the championship lead after his podium and a further two top ten finishes. Jordan is now nine points in arrears with Shedden a further 13 points adrift. Turkington has moved into fourth ahead of the MG pairing of Plato and Tordoff, who will feel they could’ve made more of their superior performance in Norfolk. Honda extended its points advantage over MG in the Manufacturers’ standings.

Lea Wood claimed the first ever hat-trick on wins in the Jack Sears Trophy as his Vauxhall Vectra ran faultlessly throughout, whilst his main class rivals suffered myriad of issues.

Sam Tordoff said: “The first one is always special. I knew that if I got away well I’d have a great chance of winning and thankfully I did. A one-two is great for the team and it feels like I have ticked an important box with this maiden win.”

Andrew Jordan said: “It was a frenetic race win. Colin was driving very very well, defensively but fair, and then he made a little mistake. I put my car up the inside – he closed me down a little bit and I couldn’t go anywhere else. It was a great race and a good win, but it’s typical of Matt Neal to come through to finish second, so I only got a few points back on him.”

Gordon Shedden said: “It was a nice way to finish. It looked like it was going to be a tough weekend, and that’s how it turned out. It’s always good to finish on a high, and it’s just reward to all the effort that Honda and Team Dynamics have put in to try and get our little Civic on the case this weekend.”

Mat Jackson said: “Everybody at Airwaves Racing has worked really hard to get to where we’ve got to, and it’s all credit to them for the results this weekend. We’ve turned a corner – we’re back. We’ve obviously found something in the car, and for a change I’m really looking forward to the next round!”

Aron Smith said: “It’s unbelievable – this is the weekend our efforts deserved and it’s like our championship has finally started. The pace Mat and I had all weekend shows that all the work that we’ve put in is now starting to pay dividends, and we now have a package that can challenge at the front. I’m sure it made for some entertaining TV, but it was certainly frantic in the car!”
2013 Dunlop MSA British Touring Car Championship – Snetterton race results: