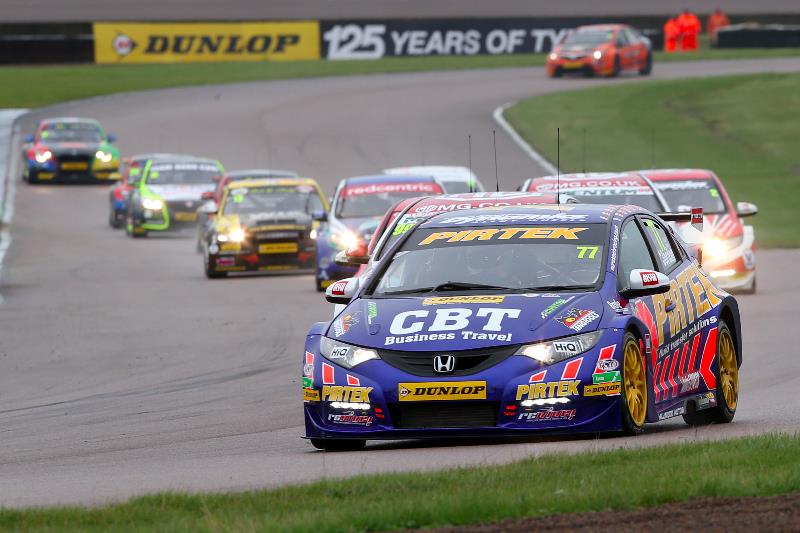 Pirtek Racing’s Jordan stormed from fourth on the grid to lead at the end of a frantic first lap in race one, which he comfortably converted into a commanding victory ahead of Airwaves Racing’s Mat Jackson and WIX Racing’s Rob Austin.

Drama struck further down the order when the Audi of Will Bratt was touched by the eBay Motors BMW of Nick Foster on the run to Gracelands for the first time, and the Toyota Avensis of Adam Morgan was collected in the ensuing melee. This triggered a separate incident as the Proton of Daniel Welch and Ford Focus of Tom Onslow-Cole collided while trying to take avoiding action. With the Malaysian machine of Welch stranded on the circuit he was hit by the oncoming Chevrolet Cruze of Andy Neate – ending both cars involvement for the rest of the day.

Race two belonged to the ever-popular Austin who blasted by Mat Jackson and pole-sitter Jordan off the line from third on the grid. By the time Honda Yuasa Racing’s Gordon Shedden had made his way into second, Austin had cruised into an unassailable lead. The main grandstand rose as one when Austin crossed the line to take the win ahead of the Scotsman and the BMW of championship challenger Colin Turkington, who had made a late race move by Jackson.

Having already moved to the top of the standings, Jordan extended his advantage after producing an assured victory in the final showdown, whilst Turkington and the MG of Jason Plato battled it out behind for the final podium positions.

As in the first race, Jordan had to contend with a safety car period following a high-speed incident in the midfield. The Toyota Avensis of Adam Morgan ran across the grass coming out of Pif Paf, whilst the Honda Civic of Jeff Smith spun luridly across the track. As cars ducked and dived to avoid Smith, Jack Goff’s Vauxhall Insignia and Rob Collard’s BMW made contact and both hit the barrier with significant force.

The safety car period had initially looked as if it could spice up the top order, but with a repeat performance from race one, Jordan dealt with the interruption with consummate ease to take the lights-to-flag win ahead of Turkington and Plato.

Rockingham represented Mat Jackson’s biggest points haul of the 2013 campaign as he backed up his podium and fourth places from the first two contests with another fourth in the last race.

Matt Neal endured a torrid time after spinning down the order in the opener and retiring from race two. He soared through the field to finish seventh in the third race and at least brought home some solid points in his quest to win a fourth BTCC drivers’ championship. Having led the standings coming into Rockingham, Neal is now fourth behind Jordan, Shedden and Turkington.

A hat-trick of wins for Lea Wood in the S2000 class means the Vauxhall Vectra driver has now moved beyond the reach of his Jack Sears Trophy rivals with six races of the season still remaining.

The 2013 Dunlop MSA British Touring Car Championship now moves on to Silverstone for its penultimate event on 28/29 September before a title-deciding season finale at Brands Hatch on 12/13 October.

Andrew Jordan said: “That went even better than I’d planned to be honest! We thought we’d be quick in the wet but didn’t really know how well we’d go in the dry so such success was a bit unexpected – the car was a dream to drive all day. With six races to go a lot can happen – Matt has had a bad day today, but that could easily be me at Silverstone so we’ve got to keep our heads down, not focus too much on the championship and keep doing what we do best which is be competitive right to the end.”

Rob Austin said: “What a feeling! It has been three years of blood, sweat and tears – for the team, for my family, for everyone. We’re up against teams with four times our budget and to beat guys like that is just incredible. I backed off a bit towards the end but Sherman was brilliantly prepared and the guys did a great job – I’m so proud of the whole team. The BTCC crowd are amazing too and I love them all! They’ve got me out of trouble already this season when we had our big shunt on the first weekend. We wouldn’t be here without them so I can’t thank the fans enough.”

Gordon Shedden said: “Today wasn’t perfect but a fourth, a second and a fifth was good strong points. It looked like we had a good run in race two, but Jordan got pole for race three and we were left to fight it out mid-pack. Even though the car didn’t quite feel in the sweet spot this weekend, it’s points that make prizes at the end of the day and it was good to score well in every race. Now I just need to go on and score some more – everybody’s been having their problems as the year has gone on except Andrew, so it’s up to the rest of us collectively to outscore him. Historically Brands Hatch GP at the end of the year has been great for us, but we’ll have a lot of work to do at Silverstone.”

Lea Wood said: “In my mind the championship isn’t over until the end of the year, but to get the results we did today and move out of reach of the others is fantastic. The car performed faultlessly all weekend. We gambled in race one on the slick tyres – it was touch and go for quite a while but we reeled in David Nye and to pass him on the final lap was a great feeling and probably one of the best moments of the year. The plan for the rest of the season is to keep winning as many as we can!”
2013 Dunlop MSA British Touring Car Championship – Rockingham race results:

Tincknell & Harvey make it three in a row for Carlin

Wins for Harry Tincknell and Jack Harvey today at Rockingham set the seal on an excellent weekend for the Carlin team in the Cooper Tires British Formula 3 International Series. Tincknell took the honours in the morning’s reverse-grid race to score his maiden win of the season, while Harvey dominated the afternoon feature race to claim his second victory of 2012 and re-establish his championship hopes.

Carlin’s Saturday winner, Jazeman Jaafar, leads the championship table by a 13-point margin from Harvey as the series swings toward Kent and the Brands Hatch Grand Prix circuit in a fortnight’s time.

Round 10
Harry Tincknell scored his first win of the Cooper Tires British Formula 3 season at Rockingham this morning, the Carlin man driving a faultless race from second on the grid to lead home two of his team-mates, Pietro Fantin and Jack Harvey, and become the sixth different winner of the season.

Tincknell won the race away from the startline, blasting past pole man Nick McBride (T-Sport) to secure the lead around the turn one banking and into the Deene hairpin, with Fantin following him through past McBride to take up second spot.

Fantin was an ever-present threat to Tincknell but there were no mistakes from the Devonian, who crossed the line six-tenths ahead for the win. “I knew it was all going to be about the start,” said Harry. “We’ve worked really hard to improve my starts, and I’m really glad that that hard work has paid off. I knew I just had to get away well and get in front to the first corner, and that’s exactly what happened. It worked perfectly. After that it was just a question of managing the tyres and managing the gap.”

McBride held on in third for four laps until Harvey squeezed through at Deene to secure the final place on the podium. The T-Sport man slipped further down the order thereafter, losing eighth on the final lap to Fortec’s Pipo Derani.

Felix Serralles got the better of an entertaining duel with his Fortec team-mate Hannes van Asseldonk, passing the Dutchman on lap five to move into fourth spot, which he held to the end ahead of van Asseldonk, Saturday victor Jazeman Jaafar, Alex Lynn, Derani and McBride.

Carlos Sainz might have been on for eighth but slipped to the back after a clash with Fahmi Ilyas caused him to spin on lap five. The Spaniard continued to 12th, behind Ilyas and Geoff Uhrhane.

T-Sport’s Spike Goddard suffered a rare defeat in the National class, Double R’s Duvashen Padayachee taking over the class lead at mid-distance and going on to record a 20-second victory. “It was a bit better for me this time around,” said Padayachee. “We weren’t quick in qualifying but we made a good step forward with the set up for the races.”

Round 11
Jack Harvey more than set to rights his Rockingham weekend this afternoon, putting in a virtuoso performance in the 11th round to win by a 22-second margin. Yesterday Jack burnt his clutch on the line and threw away his pole position advantage; today there were no errors from the Lincolnshire driver.

As is always the case at Rockingham, the start was crucial and Harvey nailed it, followed away from P2 by Fortec’s Alex Lynn and Carlos Sainz, who jumped Jaafar off the line. The only blip for Harvey came towards the end of that lap when the Safety Car made a brief appearance following a collision between some midfielders. It was on track for a lap only and Harvey handled the restart perfectly and sped into the distance.

By lap 10 jumping Jack was seven seconds clear of Lynn, and by lap 20 the gap was 14 seconds. Harvey did not slacken the pace, however, and by the end was still circulating close to his lap record-breaking pace of the seventh lap.

“That definitely made up for yesterday,” said Harvey. “I made a good start, dealt with the safety car, and the winning margin was not too shabby.” His team boss Trevor Carlin was fulsome in his praise: “That race was phenomenal – a really proper Formula 3 performance, how a driver should do it. Jack showed everyone up today.”

Alex Lynn was pleased enough with another second: “Jack was very quick today. He had a bad run yesterday so he was out to make up for it. Second is good, and I’m happy with the points.”

Sainz’s third place was some compensation for a difficult weekend for the Spanish former championship leader. “It makes up for things a little,” he said. “I got a good start and tried to push as hard as I could with the tyres that I had.”

The first-lap fracas at Yentwood corner which brought out the safety car accounted for two cars, those of Tincknell and Spike Goddard, both of whom retired to the pits. Geoff Uhrhane suffered damage also but continued after attention in the pits from the Double R technicians.

With Goddard out of the running, Double R’s Duvashen Padayachee enjoyed a trouble-free run to his fourth National Class win of the season, narrowing the points gap between himself and Spike to just 16 points in the process.