DTM GOES USA WITH COOPERATION WITH GRAND-AM AND IMSA–

Exploring an opportunity that could additionally change the face, and the future, of road racing, GRAND-AM Road Racing and the International Motor Sports Association (IMSA) tonight announced a license and cooperation agreement with the Internationale Tourenwagen-Rennen (ITR e.V.), which administers DTM racing.

The collective goal is a North American version of DTM, the popular German touring car series. Representatives from all three organizations gathered for the announcement during a press conference at the InterContinental New York Times Square Hotel’s Gotham Ballroom, an event highlighted by GRAND-AM founder Jim France and ITR Chairman Hans Werner Aufrecht signing the agreement.

“On the heels of our United SportsCar Racing and IMSA announcements, reaching this agreement adds to the momentum we’re experiencing right now,” GRAND-AM President and CEO Ed Bennett said.

“The next steps in this process will involve further discussions with various automotive manufacturers, whose commitment to this concept is essential if a North American DTM-style series is to become reality.”

“The new technical regulations and the formed partnerships represent – for the first time in the history of the sport – a global platform for the manufacturers involved,” said Hans Werner Aufrecht, “a platform offering them the opportunity to race – on the same technical basis and with the best global promoters as guarantee for a competitive and attractive platform – in the core markets of North America, Europe and Asia.

“In addition to the six German and Japanese manufacturers – Audi, BMW, Mercedes-Benz, Honda, Nissan and Toyota – which are already involved, the new cooperation quite obviously also offers a new and extraordinary field of activity for the American premium manufacturers such as Cadillac, Lincoln or Dodge SRT within the framework of future motorsport programs. Now, we have to inform and thrill them together with our new partner GRAND-AM/IMSA and encourage them to get involved.”

Said GTA Chairman Massaki Bandoh: “The new partnership between the parties will further increase the value of DTM, GRAND-AM, IMSA and SUPER GT. This would be the opening of the doors for globalization of GT/Touring car races. We have to take this opportunity to cooperate with each other.”

European automobile manufacturers responded optimistically to news of the agreement, acknowledging the importance of the U.S. market to their businesses and the direct link DTM-style racing would create with consumers.

“This offers the opportunity to use the Audi RS 5 DTM in a premium race series not only in Europe but in Asia and North America too, in the future,” said Wolfgang Dürheimer, Audi AG’s Board of Management member Technical Development. “For Audi as a globally operating company, this development represents an exciting and interesting option.”

Jens Marquardt, BMW’s motorsport director, said his organization “welcomes the planned cooperation between DTM and GRAND-AM/IMSA. It represents another important step on the way to the internationalisation of DTM. We as BMW are extremely open-minded, regarding these plans. The North American market represents the biggest market area for BMW in general – and the biggest market area for BMW M vehicles, too. BMW has got a great motor-racing tradition in the USA and therefore, we are truly happy about the prospect to also see DTM vehicles racing in the USA, in the future.”

“For Mercedes-Benz, the U.S. represents the biggest market area worldwide,” said Toto Wolff, Head of Mercedes-Benz Motorsport. “We are particularly delighted about the long-term cooperation deal between DTM and GRAND-AM/IMSA. Thanks to the technical basis agreed upon, we will be offered the opportunity to use our DTM cars to also demonstrate the competitiveness of our brand on U.S./North American race tracks, in the future.”

Sports car racing legend Hans Stuck, now the president of Germany’s motorsports governing body, Deutscher Motor Sport Bund (DMSB), considers the current DTM competitive environment a template for success. “If you want to hold motor-racing events in car nations such as Germany or the U.S., your grid must feature cars that have what it takes to fascinate the crowds,” Stuck said. “The technical DTM regulations that were developed by DMSB in close cooperation with the car manufacturers involved – Audi, BMW and Mercedes-Benz – combine this guideline with an extremely high safety level that also represents an international benchmark. We are delighted that these regulations will be used not only in Europe, in the future, but also in Japan and the U.S.” 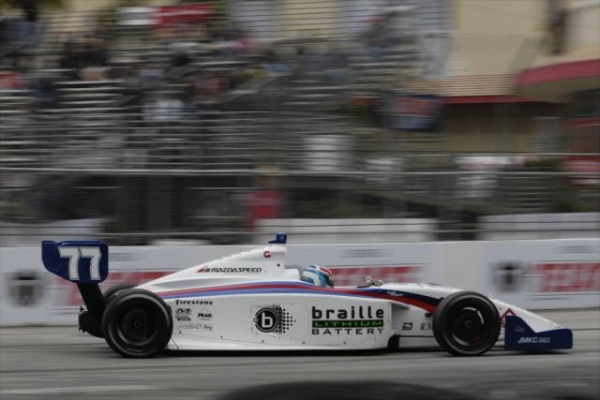 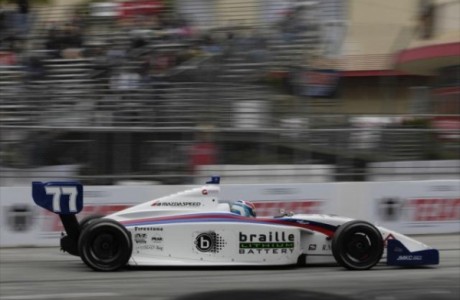 TROIS-RIVIERES, Quebec — Sam Schmidt Motorsports’ Tristan Vautier completed a weekend sweep of the Grand Prix of Trois Rivières with the victory on the street circuit.

Vautier was atop the time sheet in practice, started from the pole and went on to his third victory of the season.

At the drop of the green flag, Vautier was quickly swallowed up by Belardi Auto Racing’s Peter Dempsey, who started fifth and made a daring move to second and took the lead all on the first lap. Dempsey maintained the point until Lap 9, when a gearbox issue forced him into the pits and out for the race.

From there, it was smooth sailing for Vautier, who maintained a fairly comfortable gap over Team Moore Racing’s Gustavo Yacaman throughout the remainder of the race. Yacaman finished second after qualifying third, and Andretti Autosport’s Carlos Munoz followed up his recent win in Edmonton with a third-place finish.

The win was familiar to Vautier, who also won from pole last season at the track in the Star Mazda Championship presented by Goodyear. An obvious fan favorite because of his experience at the venue and his ability to speak fluent French, Vautier also moves back into second place in the championship battle with two races remaining.

Finishing in fourth was points leader Esteban Guerrieri, who has 383 points and a six-point lead over Vautier. Fifth was Sam Schmidt Motorsports’ Oliver Webb, followed by David Ostella and Jorge Goncalvez. Victor Carbone, Sebastian Saavedra, Juan Pablo Garcia and Dempsey finished in that order after retiring from the race with mechanical issues.

Lap 9: No. 9 Dempsey has retired from the race due to mechanical issues.

Lap 15: No. 76 Juan Pablo Garcia has retired from the race due to mechanical issues.

Lap 25: No. 27 Sebastian Saavedra has retired from the race due to mechanical issues.

Lap 34: No. 3 Carbone has retired from the race due to mechanical issues.

Lap 49: No. 4 Goncalvez is restarted and continues.

TRISTAN VAUTIER (No. 77 Mazda Road to Indy/SSM w/Curb Agajanian): “Yeah it was a nice test today. The track is a real street course, it’s hard physically, and we were under pressure after the past three races that were hard, and we got the win we needed, so I’m excited for my team. It was a great car. Big thanks to everyone, I’m really happy and the team was fantastic. We were fastest in eveyr session and we almost led every lap. I’d like to thank Mazda and MAZDASPEED, for allowing me to be here today.

GUSTAVO YACAMAN (No. 2 TMR‐Tuvacol‐Xtreme Coil Drilling): “Yeah I mean, the last 20 laps we got very close to Tristan, but second place for us today was pretty good. Sebastian was pretty far down the line and we’re fighting for third position in the championship with him, so it was a good race. Good race in the points and maybe we’ll catch up to him soon.

CARLOS MUNOZ (No. 26 Team Dialy‐Ser): It was a tough race, it was pretty long. I think 60 laps is a long race. I’m quite happy with another podium in third place, and we worked a lot of the days. After Edmonton it’s always win again, but I’m happy with the third place. Congratulations to the team, thank you to them, they did a great job, and I’m looking forward to Baltimore.

ESTEBAN GUERRIERI (No. 11 Pistas Argentinas/SSM w/Curb Agajanian): “It was pretty hot. It was a tough race, physical, I didn’t have much more to catch Munoz. I had to push and be very consistent, but we were suffering with a lot of understeer since Lap 1, so I couldn’t get it. I just had to pace myself.

OLIVER WEBB (No. 7 Lucas Oil/Sam Schmidt Motorsports): “It was a good start, I was just stuck behind Victor for the first 15 laps. He didn’t really have the pace that we did and we had a really good set up. On the damp track the car was really good, and when I finally did get past Victor, we had a couple of side-by-sides and then I eventually got past. Then it was just smooth sailing from there. We were setting the leader’s pace and we were quickest for about 20 minutes. So the car was good, just kind of an average finish.