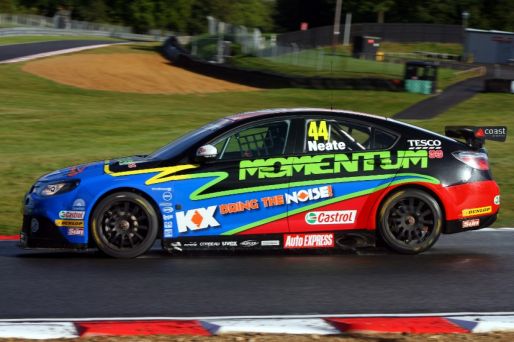 Little more than a week remains before Northamptonshire’s world-famous Silverstone circuit (Sat 6/Sun 7 Oct) hosts the crucial penultimate round of this year’s Dunlop MSA British Touring Car Championship. The three races at Silverstone will decide who will then still be in with a chance of winning the UK’s most prestigious motor racing title on Finals Day at Brands Hatch in Kent a fortnight later.
Seven drivers can mathematically still be crowned BTCC Champion in 2012, namely Honda Yuasa Racing Team team-mates Gordon Shedden and Matt Neal who lead the way, MG KX Momentum Racing’s Jason Plato, Pirtek Racing’s Andrew Jordan, eBay Motors pair Robert Collard and Tom Onslow-Cole and Redstone Racing’s Mat Jackson.
Arriving at Silverstone it is Hampshire’s Collard, Surrey’s Onslow-Cole and Warwickshire’s Jackson who will be most under pressure to perform if they are to keep their fading title hopes alive. All are presently more than 67 points adrift of leader Shedden with that then being the maximum available when the cars take to the legendary Brands Hatch Grand Prix circuit for the season finale on the weekend of 20/21 October.
Of the four ahead, two wins for Scotsman Shedden last weekend at Rockingham, also in Northamptonshire, have moved him into the championship lead by three points from Worcestershire’s Neal. Shedden has never won the BTCC before while Neal is looking to retain his crown from last season – achieved when he defeated Shedden at Silverstone – and make it four titles to his name.
For Oxford’s Plato, himself a double BTCC Champion, Silverstone is very much his home event as it is for Lichfield youngster Jordan who, like Shedden and Neal, races a Honda Civic. All three Honda drivers, though, are expecting to struggle around Silverstone’s high-speed National circuit and Plato, in his MG6, will be hoping they are right.
Plato is currently 32 points behind Shedden with a maximum of 67 available from Silverstone’s three races. What’s more his MG team-mate Andy Neate, another local from nearby Aylesbury, will surely be out to aid Plato’s chances by stealing vital points away from his Honda rivals…
Silverstone’s short lap and long, wide straights never fail to deliver plenty of doorhandle-to-doorhandle entertainment for fans. Indeed the view from Woodcote corner of cars slipstreaming and fanning out five abreast along the Wellington Straight is one of the most evocative of the season.
As ever ‘the home of British motor sport’, easily accessible from across the Midlands just off the A43 dual carriageway between the M40 and M1 motorways, is making its big BTCC weekend hugely popular among audiences both young and old. Adult tickets for race day (Sunday) start from just £29 if booked in advance with admission for accompanied children aged 15 and under FREE all weekend. All admission includes access to grandstands, the main central BTCC teams’ paddock and Sunday’s specially organised autograph session with the star touring car drivers.
To book in advance visit www.silverstone.co.uk or call the ticket hotline 0844 3750 740.
DAKAR RALLY