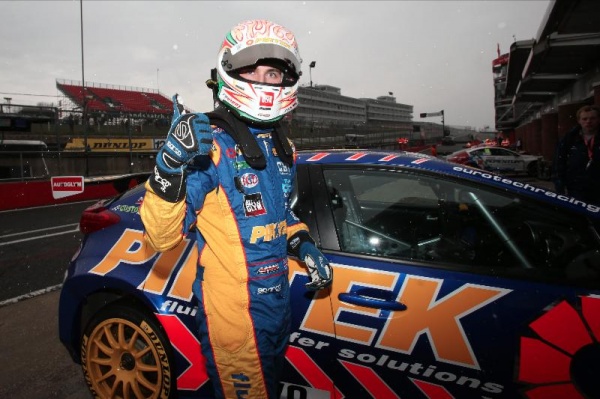 Andrew Jordan took the opening pole position of the 2013 Dunlop MSA British Touring Car Championship amid a shower of sleet at a cold Brands Hatch.
Jordan fired an early warning by setting the fastest time during free practice in the morning, and he backed that up by edging out champion Gordon Shedden by less than a tenth of a second in qualifying.
The MG KX Momentum duo of Jason Plato and Sam Tordoff will line-up third and fifth respectively for Sunday’s opening race, with Honda Yuasa Racing’s Matt Neal sandwiched between them in fourth. David Newsham rounded out the top six in his Speedworks Motorsport Toyota Avensis.
The session got off to a dramatic start with a number of drivers spinning on their out-laps while trying to get some heat into the tyres. The first notable victim was Pirtek’s Jeff Smith on the run up to Druids, but real chaos followed when Colin Turkington lost control on the exit of the same hairpin. As cars dived one way and then the other to avoid the stricken BMW 125i M Sport, an unsighted Jack Goff unfortunately collected the 2009 champion. Turkington managed to hobble his damaged BMW back to the pits but the Vauxhall Insignia of Goff wasn’t so fortunate – his car was unable to continue after the contact. Liam Griffin and David Nye both endured their own lurid moments while trying to avoid Turkington, but were able to re-join later in the session.
After a red flag period to clear the Goff’s car and related debris, it was the turn of some of the underdogs to top the times early after the restart. Rob Austin (Audi A4) and Tom Onslow-Cole (VW Passat CC) both enjoyed spells at the top of the timesheet before eBay Motors’ Rob Collard made his own move to provisional pole.
The Hondas and MGs were merely waiting in the wings however, and it was Jordan that made the first move with 20 minutes of the session remaining. Shedden fought back and made his first appearance at the top of the order with a 48.483s lap time. Not to be outdone, Jordan improved again to set a time just 0.096s quicker than his Honda counterpart.
With half of the session still remaining, any hope for an exciting climax diminished when light sleet and hail began to fall at the legendary Kent venue. With drivers failing to improve their times there were more off-track moments for Neal, Newsham and Jeff Smith.
Outside of the noted top six finishers, it was Austin who held on to seventh when the chequered flag fell, with Jeff Smith, Nick Foster and Adam Morgan completing the top ten grid order.
Airwaves Racing’s Mat Jackson and Aron Smith could only produce 12th and 14th respectively as the team admitted to be searching for the perfect set-up for its NGTC Ford Focus. Another to endure a problematic session was Dynojet’s Frank Wrathall after a ride height infringement saw his top ten time removed and he’ll subsequently start at the back of the grid.
Lea Wood dominated the S2000 runners in his Vauxhall Vectra and will have the pleasure of leading the inaugural battle for Jack Sears Trophy honours when race one gets underway tomorrow.
The big winner, however, was Jordan who signalled his intention to challenge for the 2013 title by claiming the third pole position of his BTCC career. He also leads the championship after scoring the first point of the new season for taking pole.
Andrew Jordan said: “It’s nice to qualify on pole, obviously it’s the only time that everyone will have no ballast so it’s a complete level playing field. We’ve been quick in testing, and earlier today we did a race run and the pace was really good then as well. That was really the easy part though – tomorrow’s the hard part. We’ve got a lot of work still to do, but we’ve started in the right place.”
Gordon Shedden said: “That’s got to be one of the strangest sessions I’ve driven in for a long time. It was definitely the first session I’ve qualified in where it snowed! We’re on the front row which is a great place to be. You’re never going to win the championship at Round 1 but you can make life really difficult for yourself. It’s great to be at the sharp end and with three Honda Civics in the top four, and I’m sure there are going to be three exciting races tomorrow so I cant wait.”
Jason Plato said: “I’m a bit frustrated with qualifying to be honest. There were just lots of cars out there not paying attention and I didn’t get a clear lap in. On my last lap I had purple sectors until the last corner and I got badly baulked – so I’m a bit frustrated that I didn’t reach my full potential and didn’t get the best out of the car otherwise I think we could have had a good chance at pole. Still, we’re not far off so we’ve still got a chance to win from there.”

There will be three Dunlop MSA British Touring Car Championship races at Brands Hatch tomorrow (31 March) with the opener taking place at 11:45. All three races will be broadcast live on ITV4 and ITV4 HD with the coverage commencing at 10:45.