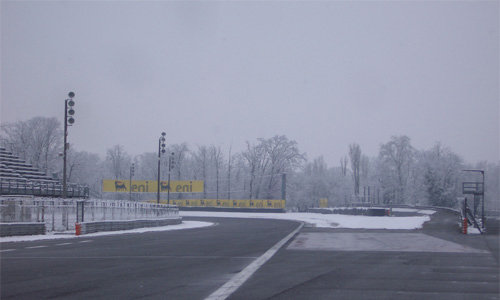 In the morning session of the first test day, all Josef Kaufmann Racing drivers did their planned testing programme. “Flying Dutchman” Robin Frijns adapted properly to the track and the cold conditions, and recorded the overall fastest lap time of the morning session.

Team’s two rookies, Hannes van Asseldonk, also from the Netherlands, and the Finn Petri Suvanto, first had to learn the track and get used to the low down force level. At the end of the morning session they were 10th and 11th.

In the afternoon the outside temperature dropped to freezing point and the fabled track fell victim to snowy conditions, forcing Kaufmann drivers to carry on the test session on used tires from the morning session.

Second day of testing saw more snow which forced cancellation of the session.

The Formula BMW Europe season starts in May as a support race to the Spanish Grand Prix in Barcelona. Kaufmann team is aiming to capture the championship with their Dutch discovery from last season, Robin Frijns, who was Rookie of the Year in 2009.

Their assault on a second successive Rookie of the Year is led by Petri Suvanto, he is rated as the next “Flying Finn” by Kimi Raikkonen’s ex-karting mechanic. Both, plus van Asseldonk, are in good hands with Josef Kaufmann Racing, based in Wolsfeld, Germany. 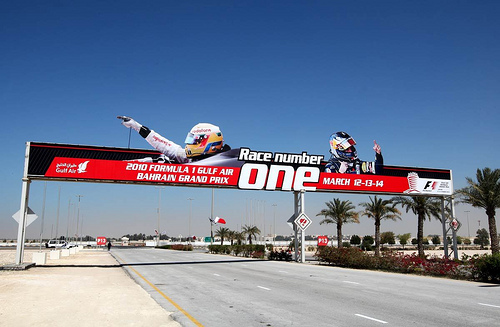 Nico Rosberg on top in second Friday practice in Bahrain.

Our three new F1 teams at the bottom of the time sheets. 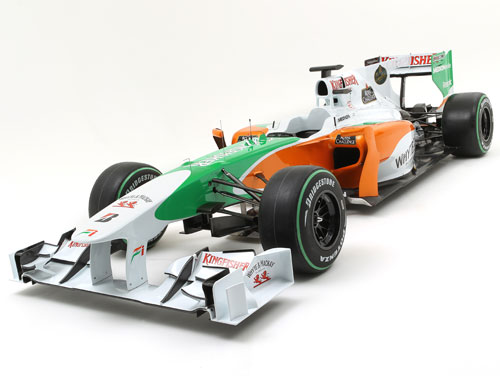 “The VJM03 is definitely an evolution of the VJM02 in terms of the design philosophies we have developed at Force India over the last year.”We are very happy with the direction, therefore we have opted to evolve the car rather than significantly revise.”

“Obviously one of the major aspects we have had to contend with are regulation changes which have had a considerable impact on some aspects of the design of the car. The removal of refueling from races increases the amount of fuel needed to be stored in the cars – almost twice the amount we ran in 2009.”

“There is a compromise now: either make the car much longer or wider, or, as we have done, a combination of both. This of course has influenced the mechanical design solutions and also the aerodynamics, specifically with respects to the diffuser and bodywork.

“Even with the ban of double diffusers for 2011, we recognize that we still have to push as much as we possibly can in this area in 2010 as we have targets to meet and the double diffuser is a key development aspect of the car.” 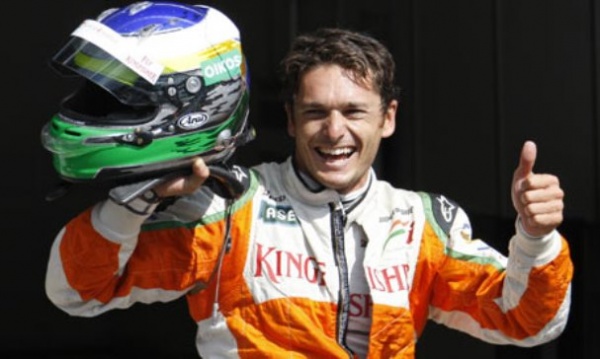 Dr. Vijay Mallya of Force India, despite all denials and rebuttal of his Commercial Director’s statement, performs the marriage made in heaven which will see his pole winning pilot from Spa to ride for the prancing horse.

The liquor baron said in a statement, "For any Italian driver, a Ferrari race seat is a long-held dream and for Giancarlo it was no exception. No one should stand in the way of this. Furthermore the agreement will secure Giancarlo’s long-term future with Ferrari and it would be incorrect to jeopardize this, particularly when Giancarlo has made such a vital contribution to Force India."

This once in a lifetime opportunity was made possible after the legendary
Italian team decided, after two very lackluster drives by Luca “Look, how bad you are,” Badoer that enough is enough. Last thing the other Luca, as in Ferrari Chairman di Montezemolo, wanted to see in Parco Monza was a Ferrari strolling in last place.

Giancarlo Fisichella, who was reported to be out of a drive next season, suddenly found motivation and speed at Spa to capture his team’s first pole position. An even more determined performance in the race saw him shadow Kimi Raikkonen all race long. Fisichella felt the curse of KERS as Raikkonen used the extra horse power to keep the force of Fisichella in a Force India behind him to score his first win since Spain last year. It has been a long siesta for the Ice Man.

"I’m in seventh heaven," rejoiced the Roman racer. "I still can’t believe it – that the dream of my life comes true. Over the last week some really incredible things happened to me: the pole position and then second place at Spa and now I’m called by Ferrari to race the last five races of the season for them.

“This is the best thing that can happen to an Italian driver, to drive a red car in front of our fans,” said Fisichella who last won a race three years ago in Malaysia as a Renault driver. His other two victories were scored in Australia in 2006 and Brazil in 2003.

Three Grand Prix wins in 226 starts do not get you a seat in Maranello. But, as they say racing, “sometimes it is better to be lucky than good.”

As luck would have it next round is the final race of the European leg of the Formula 1 season, of all the places at the mythical Monza Autodromo. Coming only two weeks after Ferrari’s first victory of the season, and Fisichella’s pole and spirited second place finish. Tifosis are sure to be more than their usual passionate to see one of their own in one of the beloved red cars.

Giancarlo Fisichella was born in Rome on January 14, 1973. He was a major force in the world of karting. He was runner-up in the European Championship in 1989 & ’91.
He also placed second in the 1990 Karting World Championship.

In 1994, Fisichella dominated the Italian F3 Championship winning half of the 20 races, and also reached the top of the podium in the prestigious Monaco F3 race.

He graduated to Formula 1 in 1995 as a test driver for Minardi, and also raced for Alfa-Romeo in the International/German touring car series. He made his Grand Prix debut in the 1996 Australian season opener and raced in further seven Formula 1 races, while continuing his duties for Alfa-Romeo in tin tops.

Fisichella joined Jordan for 1997 and two podium finishes; third in Canada and second in Belgium. He finished a respectable 8th. in the championship with 20 points. Managed then by Benetton team boss Flavio Briatorre, a legal battle between him and Eddie Jordan saw Fisichella leave the flamboyant Irishman’s team and spend the next four seasons at Benetton. Highlight of this association was his first pole position in 1998 and 6th. place in the 2000 Championship.

Back to Jordan in 2002 for two seasons. This was rewarded by his maiden victory in the rain shortened and chaotic 2003 Brazilian Grand Prix, though “Fisi” had to wait till the next round in Imola, the San Marino Grand Prix, to receive the race winning trophy from Kimi Raikkonen who had been awarded the victory at the finish.

After a solitary season at Sauber in 2004 Fisichella returned for two seasons at Renault and the wonderful company of Signor Briatorre. This was the first, and so far the only, time Fisichella was outpaced by a teammate.

A young Spanish upstart, Fernando Alonso, would seal “Fisi’s” fate with Flavio by dethroning seven-time world champion Michael Schumacher to become F1’s youngest world champion in 2005 and successfully retain the title the following season.
Fisichella would capture a win in Australia in 2005 and Malaysia in 2006. A frustrating and winless season in 2007 would see his arrival at Force India in 2008.
The Royal Park in Monza will see him turn a new leaf in his career, albeit at the tail end of his Formula 1 career. The fruit and taste of victory at the Autodromo in a Ferrari will be sweet for the rest of his life.
Fisichella is married to Luna, they have two kids, Carlotta and Christopher.

Adrian Sutil goes to the top of the time sheets in Final practice.

The Renault team and its boss Flavio Briatore have begun criminal proceedings against Nelson Piquet Junior and Senior.

Di Montezemolo, Fernando Alonso will drive for Ferrari one day.

Michael Schumacher has signed a three-year contract extension with Ferrari.

Briatore reportedly in Paris meeting with Renault board and CEO Carlos Ghosn. 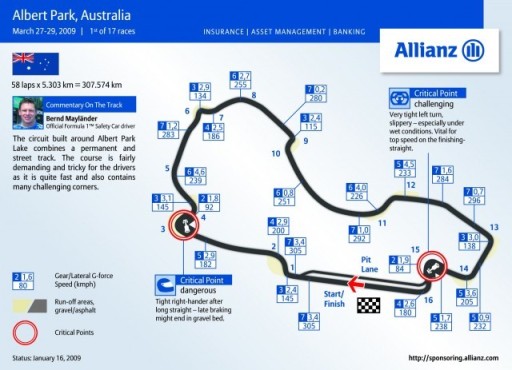 Nico Rosberg on top in Friday practice with a flying 1.26:053

Adrian Sutil in his force India outpacing the Ferrari’s.

Competing in the Skip Barber Formula Dodge Race Series on January 17, 2004, John first won at the historic Daytona International Speedway, becoming the youngest winner in open wheel road racing history. His first year in racing concluded by being selected as the sole winner of the coveted 2004 Red Bull Driver Search, a program designed to find the next American Formula One World Champion.

To begin 2005 John moved to Europe, first competing in international karting. John’s early mid-year promotion to the highly competitive Formula Renault Cup and EuroCup Series resulted in him becoming the youngest in history to hold a FIA license, and the youngest to compete in the Formula Renault series. After a first year of learning and "baptism by fire" John completed a successful campaign in 2006 with podium finishes at Spa-Franchorchamps and the Nurburgring, and his first European victory at Anderstorp. In 2007 John set another “youngest-ever” record racing in the ultra-competitive Champ Car Atlantic Championship. John recorded on podium finish, with second place at Toronto, as well as many other top-five finishes, ultimately ending 9th in the championship standings.

In 2008, John is racing in the Star Mazda Championship. Despite missing the first race of the season, John is aiming for the championship and is already a multi-race winner.