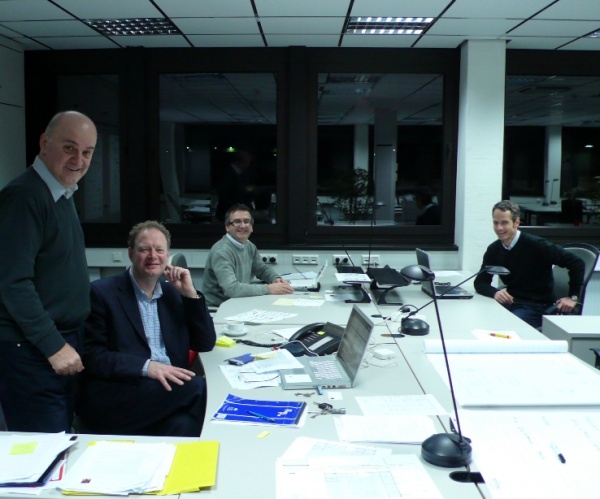 With USF1 dead in the water, Stefan GP continue to push the FIA for a 14th entry.

The truly disgusting decisions of stewards are turning F1 into a freak show.

There was a time when Formula 1 was about motor racing, hard driven men racing even harder. From the first decade of world championship who can forget Mike Hawthorn battling lap after lap with Juan Manuel Fangio before claiming his first Grand Prix victory at Reims. In the 60s, Jackie Stewart captured his first world championship with only a wee-bit of margin of victory over Jochen Rindt at Monza. The cat and super rat fight in the 70s between a very focused and determined Austrian and an English Playboy pilot. The 80s saw intensity between Senna and Prost morphed into animosity. All these great rivalries and grand battles of by-gone Grand Prix era have one common denominator. Drivers decided between themselves who the winner was. Fans that came to the races saw a great race and got a memorable result on the track.

Fast Forward To The Modern Era: The 2009 Formula 1 season is barely one event old but the result-altering stewards have wasted no time in being back in the high life again. The great duel between Lewis Hamilton and Kimi Raikkonen at Spa last year resulted in the Finnish driver spinning and crashing in slippery conditions, while the McLaren driver grabbed a memorable win. But the stewards, three men who have probably never sat in a racing car let alone race one, had other ideas which handed victory to Massa who, in his own words, was driving the last few laps “like a grand mother.”

In the land of the rising sun last year, sun really set on the common sense of the stewards when Bourdais, the victim, was penalized for a late race tangle with Massa. Then there is the Monza mockery when Alonso was accused of impeding quick lap of another competitor few years ago. The Spaniard, fighting for the world championship, was no where near the beloved red car of the Tifosis.

The Kangaroo Court: Jarno Trulli was deprived of his podium finish after the race for passing Hamilton under a yellow, fact missed by the watching millions around the world as this was not captured on TV coverage. After further review and new evidence, Trulli is again third and Hamilton, instead of having four useful points in the championship, is now on the outside and may soon be looking in.

The new world champion is accused of giving wrong information to the stewards after the race. In this day and age of technology, where there is telemetry, real time data all the time, multiple cameras at every corner of the track and life, where one is not safe even in your own basement, the FIA stewards have decided to punish not only Hamilton but also Vettel.

Hamilton may not be a regular at the Gordon Liddy Library of Truthfullness preparing to pass Mother Teresa’s college of compassion, but he is a race car driver. And a mighty fine one. Just ask his ex-double world champion teammate. Judge him by his actions on the track.

Vettel, a rare talent was only doing his job in the late stages of the race when he collided with Kubica in what can only be described as a racing incident. Now he has to give up 10 grid positions in Malaysia.

The long-shouted cry for permanent stewards with a professional ex-Grand Prix driver on the panel must be heard by the FIA. The fans want races to be decided by racers on the track. Formula 1 should not be turned into Barnum & Bailey circus where drivers are treated like clowns.

At the first hearing following the Australian Grand Prix the Stewards did not have the benefit of the radio exchanges between driver No 1 Lewis Hamilton and his Team Vodafone McLaren Mercedes nor did they have access to the comments to the Media given by Lewis Hamilton immediately after the end of the race.

From the video recordings available to the Stewards during the hearing it appeared that Jarno Trulli’s car left the track and car No 1 moved into third place. It then appeared that Trulli overtook Hamilton to regain third place, which at the time was prohibited as it was during the Safety Car period.

During the hearing, held approximately one hour after the end of the race, the Stewards and the Race Director questioned Lewis Hamilton and his Team Manager David Ryan specifically about whether there had been an instruction given to Hamilton to allow Trulli to overtake.

Both the driver and the Team Manager stated that no such instruction had been given. The Race Director specifically asked Hamilton whether he had consciously allowed Trulli to overtake. Hamilton insisted that he had not done so.

The new elements presented to the Stewards several days after the 2009 Australian Grand Prix which led to the reconvened Stewards Meeting clearly show that:

a. Immediately after the race and before Lewis Hamilton attended the Stewards Meeting he gave an interview to the Media where he clearly stated that the Team had told him to let Trulli pass.

b. Furthermore, the radio exchanges between the driver and the Team contain two explicit orders from the Team to let the Toyota pass.

The Stewards, having learned about the radio exchanges and the Media interview, felt strongly that they had been misled by the driver and his Team Manager which led to Jarno Trulli being unfairly penalised and Lewis Hamilton gaining third place.

Lewis Hamilton has been disqualified from the Australian GP.

Jarno Trulli believes the TF109 is the best car Toyota have produced.

Brawn GP may leave Force India in the dust.

McLaren’ new floor causing concern through out the paddock.