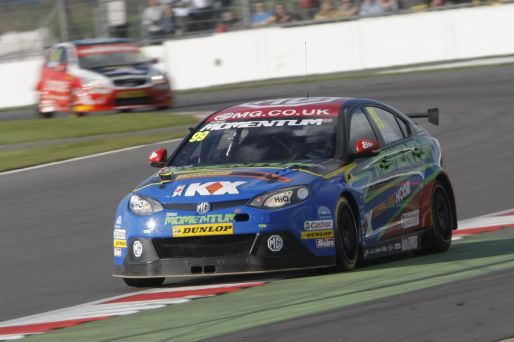 PLATO ON POLE AT SILVERSTONE AS HONDA RIVALS STRUGGLE
Jason Plato has taken pole position in this afternoon’s Dunlop MSA British Touring Car Championship qualifying session at Silverstone as points leader Gordon Shedden struggled in a lowly 19th.
Oxford’s Plato took his fifth pole of the season – also his third in a row – with a best lap of 58.717s in his KX Momentum Racing MG6. That is a new BTCC qualifying lap record around Silverstone’s 1.64-mile National circuit.
Warwickshire’s Mat Jackson was second fastest in his Redstone Racing Ford Focus which had been repaired following a practice session prang and Lancashire’s Frank Wrathall third in his Dynojet Toyota Avensis.
Robert Collard’s eBay Motors BMW, Dave Newsham’s Team ES Racing.com Vauxhall Vectra and Daniel Welch’s Welch Motorsport Proton Persona were next up to make it six different makes of car in the top six.
But the two championship leaders Shedden and Matt Neal in their factory Honda Yuasa Racing Team Honda Civics were in major trouble. Neal, the reigning Champion, was only tenth and Shedden a disastrous 19th on a circuit that both had already hinted would be difficult for them because of their car’s lack of straightline speed.
Fife’s Shedden will go into tomorrow’s three races three points ahead of Neal with Plato a further 29 back and a possible maximum of 67 available. Andrew Jordan, 11th in his Pirtek Racing Honda, Collard and his team-mate Tom Onslow-Cole who was eighth in qualifying plus Jackson all still have a chance of winning this year’s title as well.
Plato commented: “Gordon only 19th – that’s a shame, isn’t it? You shouldn’t wish ill on your rivals… but I do. Hopefully the conditions will stay dry for tomorrow because clearly we’re in great shape and a good points haul will really make this championship come alive for us. Things have a way of evening themselves out and maybe here it’s our turn after some bad luck.”
A dejected Shedden, from Dalegty Bay, added: “We knew this was going to be our bogey circuit but we didn’t expect it to be this bad – the pace simply isn’t there. As the championship leader I’ve also got to start the first race tomorrow carrying maximum success ballast in my car. The only positive from that session is that it’s over.”
Meanwhile Jackson was delighted with not only his best qualifying performance so far in 2012 but also the best yet for his squad’s new NGTC-spec Focus. He enthused: “It’s going really well this weekend despite the off earlier in practice. The gap to Jason is quite large when you look at how close it is behind but the Focus is the only other car to get into the 58-seconds bracket and we’re learning all the time. I’m feeling good about tomorrow.”
Wrathall, who turned 26 earlier in the week, said: “I’m delighted with third. It’s such a tight lap with each place decided by the tiniest fractions so it’s important we qualified well.”
Tomorrow’s three races will be shown live as part of a mammoth seven-hour broadcast (11.00am-6.00pm) on the ITV4 and ITV4 HD channels plus the www.itv.com website.
F1Weekly Podcast # 814