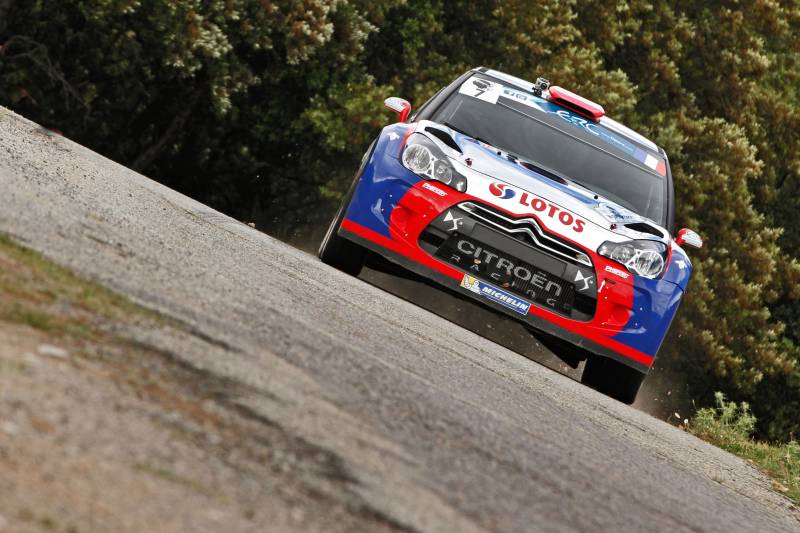 The final round of the World Rally Championship, Wales Rally GB will also mark the end of this year’s Citroën Top Driver series. And although the line-up for the race features no fewer than eleven DS3 R3s, only two crews still have a chance of claiming the title. Sébastien Chardonnet/Thibault de la Haye and Keith Cronin/Marshall Clarke are set for a fight to the death on the Welsh forests’ formidable gravel roads.

Having returned to its mid-November slot, no-one would be surprised if the British round served up the miserable conditions for which the rally is renowned and which might be summarily described as “cold, wet and muddy”. In addition to moving the service park to the north of Wales, there have been a few changes made to this year’s itinerary. The big classics such as “Hafren”, ”Sweet Lamb”, “Myherin” and “Gartheiniog” still feature but six new stages have been added, especially on Thursday with three brand new tests.

Current leader of the Citroën Top Driver standings, Sébastien Chardonnet admitted he’s looking forward to the race. “I’m on the verge of achieving one of my childhood dreams; it’s almost within my grasp but there’s still one race left to go, and what a race! With so many DS3 R3s competing, it promises to be a really good scrap. Thibault and I, we simply have to be up to the task. We have worked hard to prepare for this and we hope that the Citroën DS3 R3 will continue to be as reliable as it has been all season.”

The talented youngster, who secured the two-wheel drive World Championship title at the Rallye de France, has won once and finished as runner-up three times in the five rounds of the Citroën Top Driver contested thus far. Keith Cronin, his closest rival, is seven points behind him in the championship standings and, mathematically, is the only one who can still challenge Sébastien for the title. The Frenchman’s task will be all the more complicated as the Irishman will be competing on roads that he knows well.

“It’s going to be a great battle with Sébastien,” admitted Keith. “The conditions will be difficult and we know that this rally can throw up all sorts of challenges. The other crews competing in DS3 R3s will also be looking to get involved in the fight, which is going to pose even more problems for us but I really can’t wait for the rally to get started! Although I have never taken part in this rally, I have competed in other events in Wales and I have always liked this kind of terrain. The championship has been closely contested throughout the season and the last round will be exciting. The prize for the winner is very attractive and we’ll be giving our all to try and get the win.”

Currently third in the overall standings of the Citroën formula, Quentin Gilbert returned to winning ways with verve at the French round. Although he is no longer in the running for the title, Gilbert can still finish as runner-up if he produces a perfect performance in Wales.

Winner of this year’s Citroën Racing Trophy UK, the Finn Jukka Korhonen will line up for the rally with a simple target: test himself against an international field and get a feel for the pace of a World Championship event.

In the teams’ championship, Top Teams and Charles Hurst Citroën Belfast will be fighting it out for the title. Although there are 22 points separating the two outfits, the outcome of the championship is far from decided. Both teams will be entering two particularly sharp crews in the race, each of whom will be determined to pick up as many points as possible for their team.

“It’s all set up for a spectacular finale,” analysed an excited Marek Nawarecki, Customer Racing Manager for Citroën Racing. “Keith and Sébastien have demonstrated their potential throughout the season by finishing among the leading positions in their DS3 R3s. They have got yet another big test ahead of them in Wales and they’ll need to manage the pressure, the competition and the inherent difficulty of the rally. The fact that there are five other crews, mostly from the Citroën Racing Trophy UK and competing in DS3 R3s, will provide them with another obstacle to overcome. All that remains for us to do is to wish everyone the best of luck and… may the best man win!” 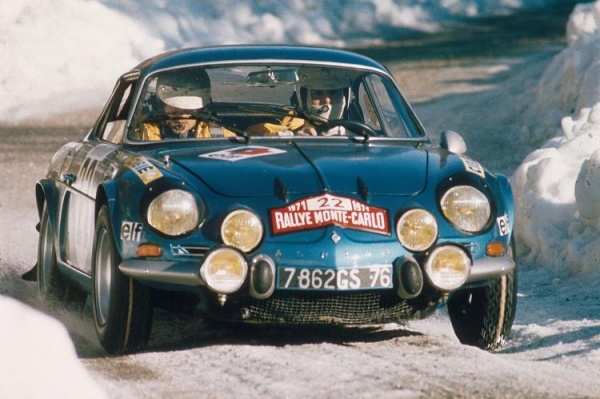 MONTE-CARLO HISTORIQUE: 5 BELINETTES TO CELEBRATE THE 40TH ANNIVERSARY OF THE ALPINE-RENAULT’S ONE-TWO-THREE FINISH IN 1973

Renault Classic will be out in force for the 16th Rallye Monte-Carlo Historique with a field of no fewer than five Alpine-Renault A110 Berlinettes.

Team Renault Classic’s five crews will start from Reims, France, on Sunday, January 27. The route visits French towns Valence and Gap en route to the finish in Monaco on February 1.

Renault’s participation in this event for the third year running is a fitting opportunity to celebrate the brand’s numerous wins and successes in 1973, including:

The participation of these five Berlinettes also coincides with Renault’s recent, long-awaited announcement of the Alpine brand’s revival last November.

Loeb’s seventh Monte Carlo win alongside co-driver Daniel Elena was confirmed when the final two stages of the event on Saturday night were cancelled for safety reasons as huge numbers of spectators brought the narrow roads to gridlock.

This followed a series of dramatic incidents in the mountains above Monaco when three of the top seven on the leaderboard, Evgeny Novikov, Jari-Matti Latvala and Juho Hanninen crashed out of the rally, which was run through a combination of snow, ice and slush.

“I had to carve a line through a thick layer of slush, and we were aquaplaning all the time,” said Loeb. “You couldn’t go any faster than 30kph on the straight sections, otherwise you lose the car completely and you go off!”

Following the first of 13 rounds in this year’s World Rally Championship, the Citroën Total Abu Dhabi World Rally Team already leads the manufacturers’ standings and will hope to build on its advantage when round two unfolds in Sweden from February 7-10.

With the UAE’s Sheikh Khalid Al Qassimi returning to WRC action in Sweden, the Emirati will first spearhead a five-car Abu Dhabi Racing assault in this weekend’s Qatar International Rally, the opening round of the seven-event FIA Middle East Rally Championship. 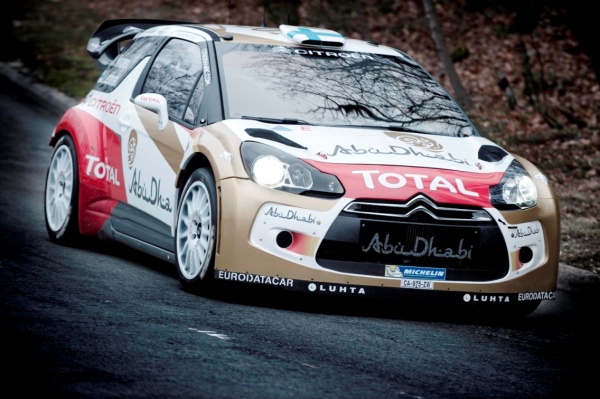 Loeb’s participation marks the start of a momentous first season for the recently-established Abu Dhabi Racing (ADR), which has created the UAE capital’s new partnership with Citroen on the WRC stage as part of a concentrated programme designed to reinforce the emirate’s global motorsport stature.

The UAE’s Sheikh Khalid Al Qassimi is central to the initiative, both as ADR Chairman and as the main driver in Abu Dhabi Citroën Total World Rally Team. In addition to running a nine-event WRC campaign, Al Qassimi will also spearhead a five-car assault on the FIA Middle East Rally Championship which starts later this month in Qatar.

With Hirvonen contesting all 13 nominated championship events, the Monte Carlo Rally represents one of only four WRC appearances this season by Loeb, who has retired from full-time competitive rallying after winning nine consecutive WRC drivers’ titles. He will alternate in the second DS3 WRC this season with Spain’s Dani Sordo. In the season opener, Sordo and co-driver Carlos del Barrio will chase points for Abu Dhabi Citroën Total WRT – the second team created by the new ADR- Citroën Racing partnership – in another DS3 WRC.

With Al Qassimi taking the wheel of a fourth DS3 WRC in Sweden, he will be following this week’s Monte Carlo event with enormous interest and expectation.

“We see this as the start of a new era for Abu Dhabi in world rallying and I’m very excited by what lies ahead,” said Al Qassimi. “I’m very happy to be getting the chance to return to action in the WRC but the bigger picture is that this is a unique opportunity to carry the Abu Dhabi brand to a worldwide audience.

“The emirate is already well known as one of the world’s top venues for Formula 1 racing and for other events held at Yas Marina Circuit. Now we have linked up with the most successful works team in WRC history and opened up another exciting avenue for UAE motorsport and Emirati drivers.”

In the first test for the three new Abu-Dhabi-branded Citroen DS3 WRCs, the Monte Carlo Rally gets under way from Valence tomorrow with four special stages. Ice and snow are expected to play a big part, making tyre choice critical en route to the finish on Saturday. In total there are 465km of timed stages and no pair is better prepared for the challenge than Loeb and Elena, who begin their ‘testimonial’ year with one of their favourite rallies, ten years after their debut Monte Carlo win.

“They’ve had an amazing run of success and it would give us a wonderful start to the season if they could take an Abu Dhabi-branded car to victory on what looks like being their final Monte Carlo appearance,” said Sheikh Khalid.