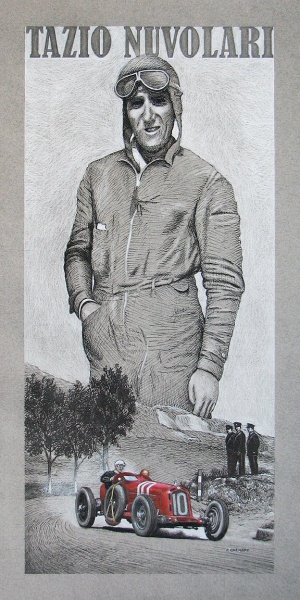 The diminutive Nuvolari wanted riding mechanic smaller than he, so enlisted a young and inexperienced Ferrari mechanic to ride with him. He told the mechanic to duck down low for tricky turns. For the race, Nuvolari drove as Nuvolari always drove and they won.

After the race, Ferrari asked the young man how it went, and he told him that he stayed ducked down for the whole race and missed it all.

“My professional background is that of a graphic designer with more than 25 years experience, but my passion is for the history of automobile racing.

“I started collecting vintage toy racecars in the end of the 1980’s and this led to picking items, books and reference material on racing history. After a few years of more collecting and studying all this, I decided to transfer my accumulated knowledge to paper in the form of illustrations and stories. In 2007, I set up a company Automobiliart.com to market my creations.

“Through my motor sports artwork, I’m trying to capture the “feeling” that the spectator has watching the race, their favorite driver in battle or the classic racecar at rest.

“My favorite drivers are many; I usually have heroes from each period of racing. I love Tazio Nuvolari from the ‘30s for his passion and skill; Juan Manuel Fangio was a shy humble gentleman and artist on the track; Sir Stirling Moss, who could win in whatever he drove; Sir Jack Brabham, with his single-minded push for success as a racer and builder; and of course Gilles Villeneuve, his fearlessness and driving art, nicely summed up at Dijon in 1979.

“I live in Halifax, Nova Scotia with my wife, our two sons and a cat.”