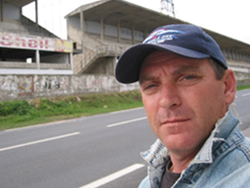 Clark Rodgers is definitely “our man” at the U.N. It certainly is true when you consider that he was born in France, raised in Spain and then brought over to America by his parents. His father, an American Air Force officer and his mother, a French woman who owned a bar & restaurant in a chic town called Laon.

His cosmopolitan upbringing has led him in diverse interests like European motor sports and Formula One to be specific. His passion for racing started at a very tender age whilst listening to Jimi Hendrix.

Having attended Formula One venues like Spa Francorchamp and Indianapolis he has a unique insight into the ever-changing evolution of Formula one. 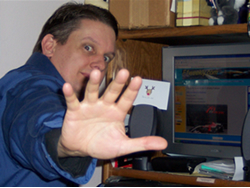 Born in the early ‘60s, in Panorama City, CA to two schoolteachers, Steve has one sister, one ex-wife and four cats. He works designing test equipment for a test equipment manufacturer, who shall remain nameless until we hit the big-time.

He is interested in all kinds of sports (baseball and hockey high on the list) and has been following F1 for about six years. He’s on board because he once bought a DVR and supplied Clark with recordings of races.

You can also find him on Batracer.com when we run F1Weekly.com Races! 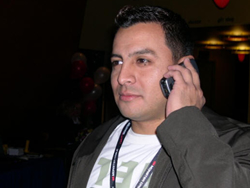 As a Bolivian born, naturally gifted young athlete David was forced to take up computers at an early age.

Sometime during his High School years he developed a sense of humor and soon took to comedy on the TV show Moronlife as a form of relief from his daily struggles against the MAN.

Now working with Clark and Steve in the exciting and dangerous world of Test Fixturing, and knowing the least about F1 he is here to provide support, laughter, sex appeal and also comply with our states affirmative action quota. 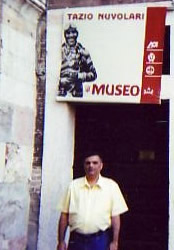 Born and raised in beautiful Karachi, Pakistan. He became interested in fast cars with fat groove-less tires from photos in magazines and Firestone ads in Time and Newsweek. His uncle, who still works for Castrol helped the cause with some company promotional materials… The racing bug took total control when he discovered Sports Round Up on BBC World Service and in mid-seventies; and the discovery of live F1 commentary on the African service of Radio France Internationale with a faded signal and in French sealed the fate…

“Henri Charpontier was the commentator and I still have vivid memories how he called the final laps of 1977 Swedish GP when Laffite won his and Ligier’s first race… Mario Andretti running out of “petrol” in the closing stages… In 1982 I attended the 1982 Italian GP where Mario was on pole, then visited Ferrari factory at the invitation of Mauro Forghieri, the famous engineer. Surprisingly, race winner in a Renault Arnoux was also there as he was going to Ferrari for 1983.”

“I used to write to drivers from Pakistan and got replies from Andretti, Sneva, Parnelli Jones, Kathy, and, of course, Forghieri. Over the years I wrote some articles and did a lot of PR work for San Jose original rebel racer Willy T. Ribbs, who is still a good friend and a San Jose resident.”

Maiden Wins calendar is 30 years of passion and love for Formula One in 13 pages. Nothing comes between Nasir and Formula One, not even Calvin Klein or Diesel jeans. 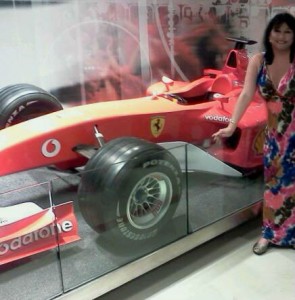 Désirée is a correspondent with a uniquely female spin on being a Formula-1 fan. Although she did not hear of F-1 while growing up in Honolulu, Désirée has always been drawn to cars, as well as scientific & technical subjects.

Désirée was first exposed to Formula-1 in 2001 by her former boyfriend watching the races in her living room, live at 4:30 a.m. She would stumble out to the TV in her nightie at the sound of the cheering and F-1 V10 high-pitched engines and eventually found herself enthralled in the sport.

Today,  Désirée remains an avid fan, always keeping current with F1 news, regs, & tech.  She does special correspondent assignments for F1weekly, including race podcast intros and website advertisements, and her GrandPrixViews — in-depth reports on Grands Prix and circuits.  She had attended Canadian and United States Grand Prix events and looks forward to future races and meeting more fans. Désirée is comfortable being the only female among the guys, so is right at home as a part of the GrandPrixWeekly.com team. 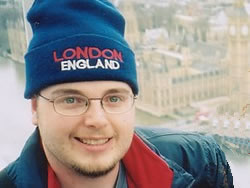 An expatriot Brit who transplanted to the USA in 1994, Toby has been in professional web applications development since 2000. Married to JoAnn since 2001, they have two daughters and two pitbull mixes. They live in the Adirondack Region of New York State.

Growing up in the UK during the 80s, Toby remembers the battles of drivers like Senna, Prost, Mansell, Arnoux, and numerous other greats. He was always a Williams fan, but since the mid 90s has worn Maranello Red every weekend.

Toby is Co-Founder and Partner of Daron Communications, GrandPrixWeekly.com’s proud hosting partner. Bringing experience and knowledge to the F1Weekly.com team with updates, new features and a rare insight into the Internet.

Bryan Thomas is the original founding member of Thieves Cross. Born in Germany, he lived just down the street where the infamous Nuremburg trials took place.

Bryan took up the guitar quite early, at ten. After coming to this country, getting the language down, he took up the Bass in 1979. In mid 1984, he played the reggae beat to it’s limit and formed the basic approach to the psycho rock now called Thieves Cross with Clark Rodgers on guitar. With an english handmade bass by Wal, he creates Funk/Punk bass lines to this day. Resting on TV/Movie soundtrack creation, Bryan continues to operate under the name Thieves Cross, weaving sounds that stir human reaction and conjure up mood. Las Vegas is where he calls home now. A perfect city for musicians that play from the heart and struggle with success.