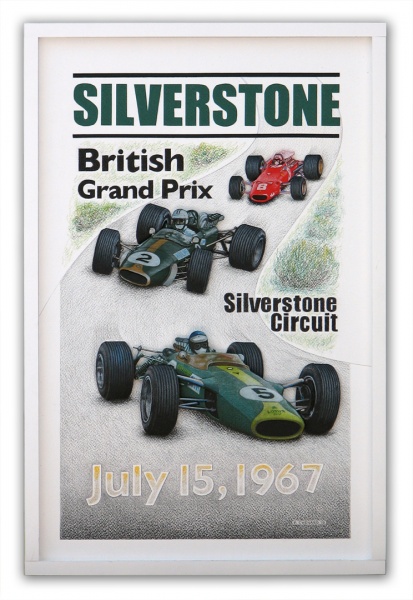 The Lotus 49 was another of a long line of brilliant Colin Chapman (and Maurice Phillipe) designs, being the first Formula 1 racecar to successfully use the motor as a stress-bearing structural member.

Jim Clark won 4 races in 1967 driving the Lotus 49, and the first race of the 1968 season before being tragically killed in an F2 race in Hockenheim.

I decided to illustrate a “faux” 1967 Silverstone poster, done in the old mid ’60s British style.

As an experiment, I wanted to render a normally 2D sketch into 3D. To create the 3D illusion, I had to illustrate the cars in parts, and then assemble the parts onto the illustrated background.

For example, the Clark Lotus 49 is built from 9 separate illustrations, cut out, and assembled in layers to create a “trompe l’oeil”. The 3 cars are done like that, and positioned into their 1st, 2nd, and 3rd race finishing order. The “Silverstone” text is also cut out paper…

Our friend Paul is based in Nova Scotia, north of the border (nice weather, eh).

A passionate fan of motor racing, we invite you to visit his work at: