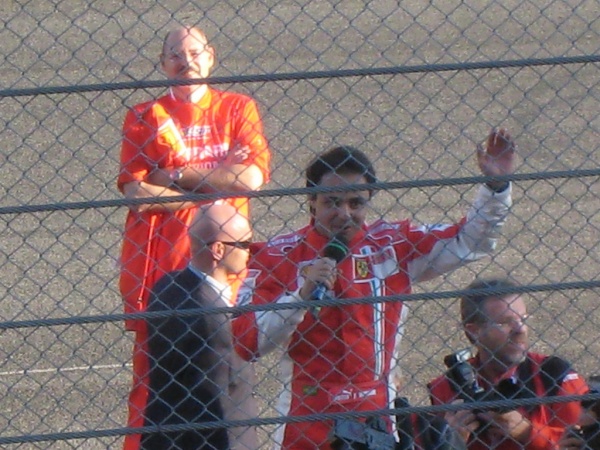 Will Felipe Massa  wave goodbye to Ferrari to make room for Kubica or Vettel?

Lotus to now focus on their 2011 contender powered by Renault perhaps.

1950 Fangio’s first win in an Alfa Romeo. Alberto Ascari’s second place finish was first podium and points finish for Ferrari in Formula 1. Harry Schell was the only American in the race and was out on the opening lap after a collision.

1955 Maurice Trintingnant becomes the first French driver to win an F1 race, driving a Ferrari. This was also the first GP win for Englebert tires.

Race is best remembered for Alberto Ascari going in the water in his Lancia. Once again, Harry Schell was the only American in the race, retiring on lap 68 when his engine was ‘done blowed up’.

1957 Fangio was the winner in his Maserati and America had its first podium in F1 when Masten Gregory finished third in his F1 debut driving a Maserati.

1960 Stirling Moss in Rob Walker Racing entry gives Lotus first success in F1. Phil Hill was third in this race in a Ferrari.

1961 Moss keeps the sharks at bay. One of the greatest wins in F1 history as Stirling Moss in a privately entered Lotus holds off three shark nose Ferraris to win again in Monte Carlo. Three Americans in the top five, Richie Ginther second, Phil Hill third and Dan Gurney, all from Southern California, fifth in his Porsche.

1967 Italian Ferrari driver Lorenzo Bandini crashed on lap 81 while chasing Denny Hulme for the lead, his Ferrari turned upside down and caught fire with fatal injuries to the driver. Denny Hulme went on to win his first Grand Prix.

1969 First pole position for Jackie Stewart and final Grand Prix start for Cooper. Race was won by Graham Hill, his fifth and final win giving him the nickname Mr Monaco.

1970 Rindt got a surprise and a win courtesy of Black Jack.

1971 Stewart wins with only front brake.

1972 First and only Grand Prix win for Jean Pierre Beltoise, and the final win for BRM.

1978 After a long wait Patrick Depailler finally wins his first race in a Tyrrell.

1981 Gilles Villeneuve wins for Ferrari. Eddie Cheever was fifth in a Tyrrell.

1992 Senna holds off Mansell for a great win.

2004 Schumacher and Montoya tangle in the tunnel. Trulli wins his first and only race.