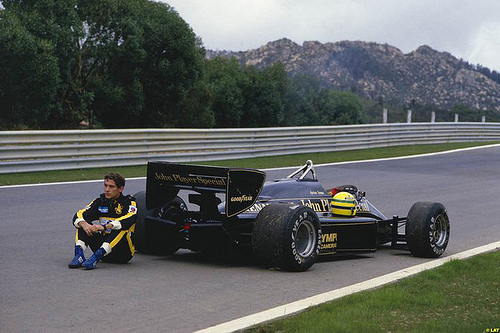 Will the real Lotus please stand up!

RENAULT MAINTAINS ITS COMMITMENT TO F1 AND

Focusing on a proud tradition as an engine manufacturer

Renault announces the creation of Renault Sport F1, the sporting division that will be responsible for Renault’s involvement in Formula 1™ racing as a supplier of engines and

technology for the 2011 season and beyond. Renault Sport F1 will supply three teams in 2011, which equates to 25% of the grid.

As well as supplying engines, Renault Sport F1 will conduct advanced research studies with its partners, as well as engineering programmes in areas such as transmissions and kinetic energy recovery systems (KERS).

The new division will put forward Renault’s technological response to the challenge raised by the new F1™ regulations on engines. It will be a laboratory for developing technologies

that better respect the environment, applicable to combustion and electric powertrains as well as to production models.

Its Chairman will be Bernard Rey, a member of Renault’s Management Committee.

The creation of Renault Sport F1 follows Renault’s decision to sell its minority stake in Renault F1 Team to Genii Capital. Renault will continue to provide strong support for the Enstone team as a supplier of engines, as well as technological and engineering expertise.

podium finishes in 2010, including a historic 1-2-3 at the Formula 1 Grand Prix de Monaco 2010. Renault engines have won three of the last six world championships.

Renault will be supplying engines to three of the teams on the grid in 2011:

seasons. Demonstrating its confidence in Renault, it has extended the partnership for a further two years.

1 Malaysia Racing Team (UK) Ltd: a new customer for Renault in 2011. This team made its F1

debut in 2010. It has a sound technological base with the Renault engine and Red Bull Technology transmission.