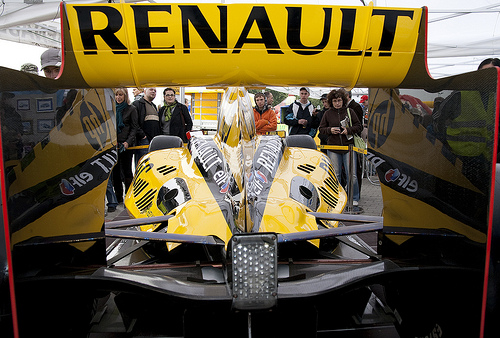 (Reuters) – The Renault Formula One team slapped a silencer on the French national anthem on Thursday after announcing they will race under a British licence this season.

With no active French F1 drivers, and no French grand prix since 2008, Renault were the last ones flying the flag for a country whose heritage and language permeates the sport from chassis to grand prix and on to parc ferme.

British-based sportscar company Lotus, owned by Malaysian carmaker Proton, have joined as title sponsor and significant stakeholder this season after Renault sold their shares in a team that retains their name.

“Lotus is an English manufacturer,” team principal Eric Boullier told autosport.com after a launch of the team’s new livery at the Autosport International show in Birmingham with their Russian driver Vitaly Petrov.

“I have not announced this before, but we will be running under a British licence now,” added the Frenchman, whose team factory is at Enstone in central England.

“It means that if we win, we will play the British national anthem. And that is important for everybody inside the team. We are rebranding everything inside the company now.”

Renault, world champion constructors in 2005 and 2006, last won a race in 2008 with Spain’s Fernando Alonso, now with Ferrari.

(Reporting by Alan Baldwin; Editing by Justin Palmer; To query or comment on this story [email protected])