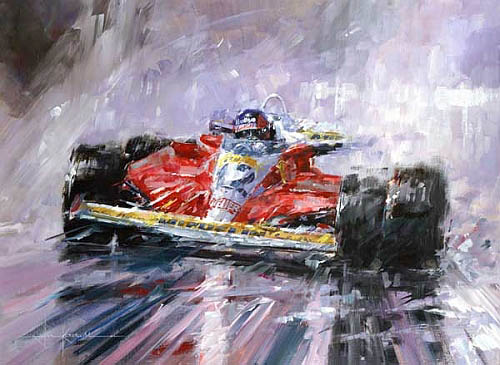 January 18, 1950: Gilles Villeneuve is born on this day. The son of a piano-tuner played his own racing rhapsody, starting with snowmobiles in his native Quebec. Hauling his family race to race he set new standards in Formula Atlantic. Waves he made with gutsy and relentless pursuit of winning were felt across the pond.

Gilles’ performance in the Trois-Riviers Formula Atlantic race against established Formula 1 stars was talk of the town and track. James Hunt, on his way to a world championship, recommended this French-speaking charge to his McLaren team boss, Teddy Mayer.

Out of nowhere the Formula 1 world was treated to this speed demon at Silverstone. Entered in a third McLaren for the 1977 British Grand Prix the new kid on the block out-qualified the team’s regular number two driver, Jochen Mass.

The speed and tenacity shown by the little Canadian that weekend got the attention of the man most drivers crave for after years in Formula 1, Enzo Ferrari.

Gilles Villeneuve would spend the rest of his life and career on a prancing horse, and what a stride it was. Maiden win came on home soil in Montreal in 1978. A total of six Grand Prix victories were scored, most memorable was his freight-train victory at Jarama in the 1981 Spanish Grand Prix where he held-off a charging Jacques Laffite and three other drivers to score what would turn out to be his final win in Formula 1.

In between the wins was a race for which Gilles Villeneuve will always be remembered. It was his epic battle for second place with Rene Arnoux in the 1979 French Grand Prix at Dijon-Prenois. A battle royale over three decades ago is still a joy to watch.

For the 1982 season Scuderia Ferrari had the car, the beautiful 126C, to bring home the turbo-charged glory. The two pilots spoke the same language but there was complete breakdown in communication after the 1982 San Marino Grand Prix controversy. Sadly, controversy was followed by tragedy in qualifying for the next race at Zolder, the Belgian Grand Prix.

Enzo’s “Prince of Destruction” was unable to survive the accident approaching Terlaemenbocht corner, and the motor racing world lost a fierce competitor and what one journalist called “poet of a driver.”