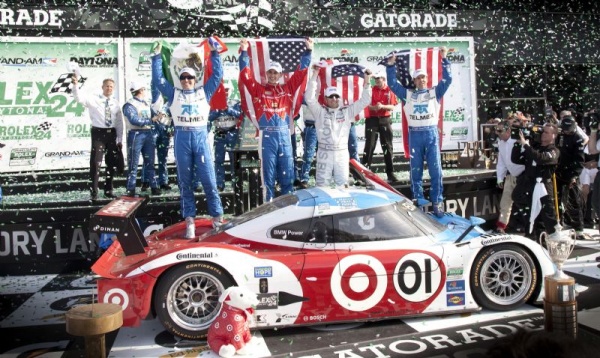 With 23 hours logged at the 2011 Rolex 24 At Daytona it would be natural to assume the drivers would be looking to preserve their equipment in order to make it to the finish, but here at Daytona International Speedway it is the exact opposite.  With four DP cars in the hunt for victory, and only one hour left to race, anything can happen as the contenders fight through traffic in pursuit of the lead, occasionally swapping paint while doing so.  The fight intensifies as time runs out and it becomes do-or-die for the front runners.

Among the 18 DP entries, the #02 Telmex/Target BMW Riley had set the pace and led the race since 12:50 pm.  Giving chase was the #9 Action Express Racing Porsche/Riley followed closely by the #01 Target/Telmex BMW Riley, with the #23 United Autosports car also in contention.

“Before I got in the car I discussed what might be our best options,” said Scott Pruett (Sacramento/Auburn, Calif.) of his last stint in the #01 car.  “We knew we had a strong car but you cannot really over think things, you just have to get in the car and go as fast as you can.  All we did as drivers is keep that car as clean as possible.  If you look at it now you will see an immaculate race car even after racing for 24 hours, that’s what it takes to win.”

“This is the big race of the year and everyone comes here to win,” said Pruett having just become a four-time Rolex 24 At Daytona winner (1994, ’07, ’08, ‘11).  “We had the lead toward the end and all we had to do is run smart.  Our car is very fast coming off a yellow-to-green flag.  I was glad that Grand-Am was able to go to green at the end.  I hate when a race finishes under yellow, it’s just a big disappointment for the fans.  I pushed as hard as I could on that last lap.  It takes a team effort and the team starts off by our boss Chip Ganassi and of course the mechanics.  There is so much effort and energy given before we even come here.  The #01 car has finished every lap at the Rolex 24 At Daytona for the last five years so that gives a true testimony for what the Ganassi organization is all about.”

Sharing the driving duty in the winning #01 car was Memo Rojas (Mexico City, Mexico), Graham Rahal (Columbus, Ohio/Indianapolis, In.) and Joey Hand (Sacramento, Calif.).  Rahal was eight years old when his father, Bobby Rahal, won the 1981 Rolex 24 At Daytona.  “I grew up looking at Dad’s Rolex and trying to imagine having one of my own.  I never imagined I would have one so soon.”

Capturing the attention of all in attendance was the remarkable come-from-behind performance in the GT Class as the #67 TRG Porsche GT3 went from starting the race in last position, to take a convincing lead in the Rolex 24 At Daytona.  The pole-winning qualifying time of driver Andy Lally (Northport, N.Y./Dacula, Ga.), which set a new lap record, had been disallowed after qualifying.  As the 24-hour endurance challenge went on, it was rumored that the clutch on the #67 car had become problematic, causing the drivers to lift a bit early going into turn one and the bus stop chicane – adding to the drama of the GT race.

“The big problem of course was the matter of losing the clutch with 17 hours to go in the race and that makes things very difficult as you can imagine,” said Lally about the problems with the #67 car.  “What it means is there cannot be any mistakes made.  If you spin out for some reason and have to be towed back to the pits you’re going to lose three or four laps and you might as well just pack it up and go home because your race is done.”

In the end, the lead was converted to a win for the team that included drivers Brendan Gaughan (Las Vegas, Nev.), Wolf Henzler (Nuertingen, Germany) and Spencer Pumpelly (Arlington, Va./Suwanee, Ga.).

“It’s an incredible thing that we did. . . to drive so many hours without incident and shifting gears without a clutch,” said Lally.  “We actually had to knock it out of gear and then match the revs of the engine with the speed that the rear tires were going in order to get the car into gear and to do that for so long is amazing.  It was pretty tricky but we all seemed to figure out how to do it.  This is absolutely the greatest feeling there is to win the Rolex 24 At Daytona.”

For many, and two in particular, the 49th edition of this classic 24-hour endurance race was a watershed event.

“It’s been my dream to be on the podium at the Rolex 24 At Daytona,” said actor Patrick Dempsey who was overwhelmed with emotion after taking the podium with a third-place finish in the GT class driving the #40 Mazda RX-8.  Dempsey was making his fourth career appearance in this edition of the legendary endurance race, having seen his previous best-finish last year with a sixth.  His post-race remarks included joking that he would be retiring from the television show Gray’s Anatomy as a result of his performance here so that he could race more frequently.  “Now there’s a headline,” he said before seriously addressing the contributions of the rest of his team.  “This is a team sport,” said Dempsey.  “We have a lot of people who made it possible for us to be here.”

“This 24-hour race went down to the green white checkered flag,” said Italian racer Max Papis who resides in Miami, Florida, after finishing third in the DP in the #9 Action Express Racing Porsche Riley.  “In my 17 years at the Rolex 24 At Daytona, I never thought I would see it.  For sure, to open the season like this…I’m enjoying a lot what we’ve done today.  To me it was one of the best races I’ve ever been part of.”