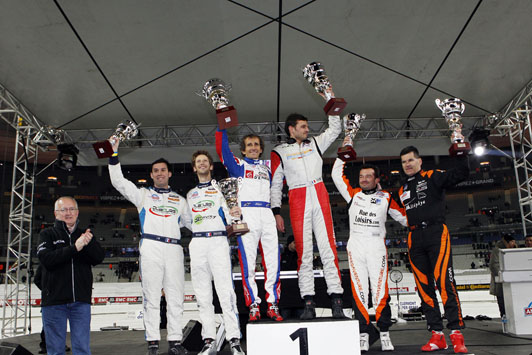 More than 50,000 spectators packed into the Stade de France, near Paris, to watch Alain Prost and his Dacia Duster sweep the board in the non-championship Trophée Andros meeting. After winning the pursuit race, Alain Prost was joined by one-off team-mate Evens Stievenart to claim the grand finale, too. Dacia and Prost also won the weekend’s popularity contest after making an indelible mark on the season-ending gala.

The Stade de France attracted a huge turnout on Saturday, March 5, to cheer on the Trophée Andros regulars. And although the results didn’t count towards the championship standings, it was a meeting not to miss and the most prestigious clash of the year to win.

Alain Prost and his Dacia Duster rose to the occasion, and the four-time World Champion attracted the bulk of the applause as he drove round the purpose-built ice circuit for the first time. The day kicked off with a pursuit competition involving the top four finishers of the 2010/2011 Trophée Andros.

The semi-final saw Alain Prost eliminate Olivier Panis by a score of two wins to nil, which qualified the Dacia driver for a bill-topping final against Jean-Philippe Dayraut. Prost then promptly polished off the winter’s Trophée Andros winner – once again by a score of two heats to nil – to get the day off to a flying start for Prost and Dacia. “It was important for us to win the pursuit race, especially against Jean-Philippe Dayraut,” observed the Team Dacia driver.

“Pursuit races are a very specific exercise and I had never won one at the Stade de France until today. This time, I didn’t lose a single heat, which is very gratifying. We were extremely competitive and everything passed off perfectly. I would like to dedicate my win to Dacia and to the public who gave me such a warm welcome.”

The rest of the programme was just as successful for Dacia and Alain Prost who was joined by Evens Stievenart for the two-part finale. Stievanart started his race from the second row but eased into the lead thanks to a splendid passing manoeuvre which had the crowd and everyone at Team Dacia on their toes. He went on to win the first heat, which enabled Alain Prost to start the finale from pole position.

The last virile eight-lap race saw Alain Prost take the flag in first place to hand Dacia a whitewash success at the Stade de France. “We really wanted to perform well today, and we did,” beamed Alain Prost. “It wasn’t easy, because I picked up a rear-right puncture, but the finale was pretty chaotic for everyone. It was important for Dacia to win in front of the packed grandstands here. We were the fastest, and also the most robust on the day, and our success at the Stade de France was the perfect way to wrap up the campaign. I was touched by the crowd’s warm welcome and the best way to thank them for that was to win the pursuit race and the finale. We will now start working to prepare for next season. I hope our triumph here at the Stade de France will lead to more success in the future…”