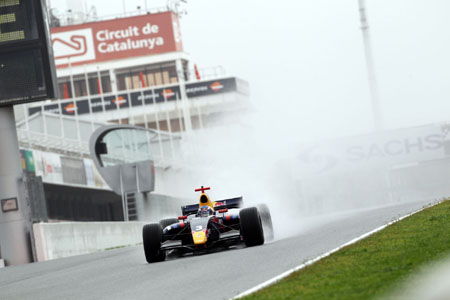 Rain in Spain does well for Ricciardo again

Following on from Motorland Aragon, the drivers from Formula Renault 3.5 Series met up in Barcelona for the first of two days of collective testing scheduled at the Catalunya circuit. Weather conditions proved difficult today, with a track that was almost undriveable at times. Like at Motorland Aragon, Daniel Ricciardo (ISR) finished the day at the top of the timesheets, ahead of Robert Wickens (Carlin) and Brendon Hartley (Gravity – Charouz).

For this second session of collective testing, the Formula Renault 3.5 Series driver line-up had changed slightly. On home turf, the Catalan driver Miki Monras joined the Pons Racing team, while Sergio Canamasas – after driving with Pons Racing and Epsilon Euskadi at Motorland Aragon – this time teamed with BVM Target, along with Daniel Zampieri, who hadn’t been able to take part in the first collective test of the season through illness.

The rain was expected and sure enough disrupted the early part of the day’s testing. In difficult conditions and after a long wait, Andre Negrao (International Draco Racing) was the first driver to record a significant lap time. Jan Charouz (Gravity – Charouz Racing) came into action next and took his turn at the top of the timing sheets in 1’55”663. After over 80 minutes of the session, Daniel Ricciardo took over top spot in 1’55”633. The FR 3.5 Series runner-up continued with fast laps, clocking up a 1’54”613 then 1’54”303. Subsequently, violent downpours prevented drivers taking to the track during the second half of the morning session and the race director brought out the red flag after Brendon Hartley span, just after taking second place.

Conditions were still damp in the afternoon and the first hour saw multiple red flag incidents. Robert Wickens went quickest with only his second lap, clocking 1’55”321, before going into the pits where he was to stay for the rest of the afternoon. With the track still wet, no one was able to beat the time set by Daniel Ricciardo in the morning, the ISR driver ending the day ahead of Robert Wickens, Brendon Hartley, Albert Costa (Epsilon Euskadi), Jan Charouz and Alexander Rossi (Fortec Motorsport). Testing will continue tomorrow.

Alexander Rossi : “I’m getting to know the team and we’re already in a good rhythm. I am very pleased with the progress made throughout the day. To finish third in the afternoon session was good. We’re excited at the idea of fighting for the title.”

Andre Negrao : “I am gradually acclimatizing to the International Draco Racing team. It is only our third day of practice together. I am sure it will work out and that we’ll find the settings it takes for the car to be perfect. But I still have much to learn. Today was particularly difficult.”

Oliver Webb : “In terms of downforce, the Formula Renault 3.5 is not really different from the cars I’ve driven so far, but I find the cornering speed and the effectiveness of the carbon brakes on this car exceptional. I need to concentrate now in order to learn to manage these parameters, but I’m confident.”